Rosemary Phelan -- What Sings in the Blood 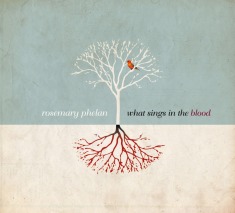 ROSEMARY PHELAN
What Sings in the Blood
Mighty Wren
rosemaryphelan.com

If I’m not mistaken, Toronto-based singer-songwriter and community nurse Rosemary Phelan had already finished recording What Sings in the Blood, a lovely set of haunting songs, and was already scheduled to launch the album this Wednesday (October 27) with a concert at Hugh’s Room in Toronto before she was diagnosed with ovarian cancer in July.

With her cancer battle, some of these songs – no doubt influenced by her years as a community nurse – seem almost prophetic as she poetically wrestles with human mortality. “Oh you never do know if tomorrow will come,” she sings in “Redwing,” the first song on the album and “Red sky at night, gold light at dawn/Will still burn bright when we are gone,” she sings in “We Never Cry.” In “Overwhelmed,” Rosemary seems to be reflecting the ongoing struggle between life and death faced by someone dealing with serious illness.

Not all of the songs call for reinterpretation in light of Rosemary’s cancer battle. “Three Wishes” is a peace song that longs for a world in which prayers for peace are no longer necessary; “Hymn for the Innocent,” which touches on many themes ranging from the innocence of childbirth to the sacrifices of war, almost seems like a Stephen Foster song from 150 years ago; and “Red Dress,” is a mature love song borne of life’s everyday struggles (and is one of several songs on the CD in which the colour red figures in one way or another).

BTW, I like the roots and branches motif of the cover drawing.