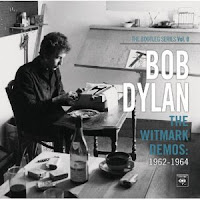 Like countless other songwriters signed to Tin Pan Alley publishing houses over the years, Bob Dylan – between 1962 and 1964 – knocked off quickie solo demos of many of his songs so that they could be pitched to various recording artists. And when song publishers Leeds Music – briefly – and Witmark signed the young songwriter to publishing deals, they surely had no idea that he was on the verge of smashing the Tin Pan Alley model that the music business had thrived on for decades ushering in the era of the singer-songwriter.

Dylan was all of 20 years old when he recorded his first LP – Bob Dylan – in late 1961 (it was released in '62). Although that album only included two of Dylan’s own songs, the songs had already begun pouring out of him at a pace seemingly unrivalled since Woody Guthrie’s most prolific period in the 1940s and he began cutting these demos in January 1962.

And it wasn’t just the sheer number of songs that he produced in this period that was astounding – it was the already-mature quality of the writing, its constant evolution and its wide variety. Here was a kid between the ages of 20 and 23 producing topical songs like “Blowin’ in the Wind,” “A Hard Rain’s A-Gonna Fall,” “Masters of War,” and “Ballad of Hollis Brown”; love songs ranging from “Tomorrow is a Long Time,” to “Farewell,” “Don’t Think Twice, It’s All Right,” “Girl from the North Country” and “Boots of Spanish Leather.”

There are comic songs, philosophical pieces, folk-based ballads, and, in “Mr. Tambourine Man,” the second-to-last of these demos presented completely and in chronological order, a great big hint at how Dylan would soon redefine the possibilities inherent in a contemporary song.

These publishing demos – which are Dylan solo, mostly playing guitar, or guitar and harmonica, or occasionally piano – were not recorded for commercial release so there are some that include coughs, abrupt endings and forgotten lyrics. The recording quality varies from track to track and few of the versions here are superior to the officially recorded and released versions. But, still, every performance is worth listening to for clues to the development of the most essential of all 20th century songwriters. One track that is particularly noteworthy for its unique approach is the version of “Mr. Tambourine Man,” the earliest he ever recorded, which Dylan plays on the piano, giving it a very different feel than his guitar-based versions of the classic. (For what it’s worth, I think the definitive version of “Mr. Tambourine Man,” is the nine-minute performance on Live 1966, The Bootleg Series, Vol. 4.)

And, what makes this collection essential are 15 songs that Dylan has never before released on albums or earlier volumes of The Bootleg Series. Some of the 15 I know from other artists like Dave Van Ronk, who recorded a Dixieland version of “All Over You” with the Red Onion Jazz Band, or Judy Collins, who sang “Farewell,” based on “The Leaving of Liverpool,” so beautifully on Judy Collins #3, or Odetta, who did “Long Ago, Far Away” on her whole album of Dylan songs. But, there are some, like the Guthrie-esque songs “Gypsy Lou” and “Ain’t Gonna Grieve,” the latter surely based on Woody’s “Sally Don’t You Grieve,” that I’ve never heard before by Dylan or anyone else.