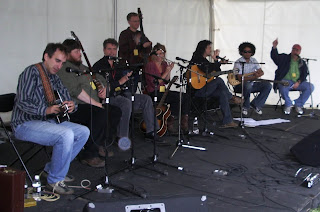 A very interesting collaboration of Riley Baugus, one of the finest contemporary masters of traditional Southern, old-time music, who was recently on tour and CD backing Willie Nelson in his traditional country project, and Jenny Whiteley, one of Canada’s best singer-songwriters and multiple Juno-winner, and her brother, multi-instrumentalist Dan Whiteley, is now on tour with dates this weekend in Kingston, Montreal and Wakefield (near Ottawa).

Riley was a guest on Folk Roots/Folk Branches in 2006. We recorded the conversation in August 2006 at the Ottawa Folk Festival where I hosted a couple of workshops that he participated in. He should not be missed by anyone interested in traditional Southern music.

This review I wrote of Riley’s album, Long Steel Rail, is from the January 11, 2007 issue of the Montreal Gazette.

Although Riley Baugus is a relatively young singer, banjo player and fiddler from North Carolina, his music is deeply rooted in ancient Appalachian balladry and the traditional old-time country music he grew up playing. It is obvious that Baugus is a modern master of this old music. Performing songs like "Old John Henry" and "Lonesome Road Blues," Baugus’s singing and playing powerfully evokes generations of earlier musicians who have passed these songs along. When he lays down his instruments for an a cappella rendition of "Now is the Cool of the Day," his voice is spine-tingling. Baugus’s principal collaborators on the album are co-producers Tim O’Brien, who plays mandolin and guitar, and Dirk Powell, who plays fiddle and guitar.

And click here for my review of Jenny’s latest album, Forgive or Forget.

It should be a great concert They’ve already played in Toronto and have these dates coming up: