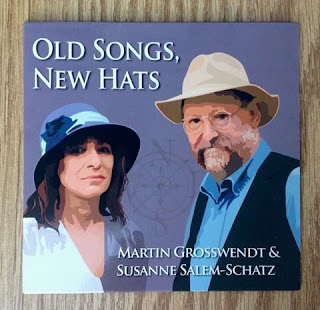 Martin Grosswendt, whose recordings over the years have appeared all too rarely, has been one of my favorite blues artists for about four decades. He is also rather accomplished at various other traditionally based roots styles and his eclecticism is more than evident on this seven-song, 22-minute EP marking the first release from his duo with Susanne Salem-Schatz as they draw on blues, real deal country music and contemporary folk music.

Martin and Susanne are a self-contained unit with Martin on guitar and banjo, Susanne on guitar and mandolin, and both trading lead and harmony vocals. Among my favorite tracks is Martin’s version of Larry Murray’s great song about an old Cajun barroom singer, “Mama Lou.” I’m sure I must have heard Martin backing up our mutual friends Jim Ringer and Mary McCaslin on “Mama Lou” at some point back in the 1970s.

Other highlights include “How Can You Have the Blues,” with Martin as Georgia Tom and Susanne as Kansas City Kitty, and Susanne’s take on the classic blues “After You’ve Gone.” 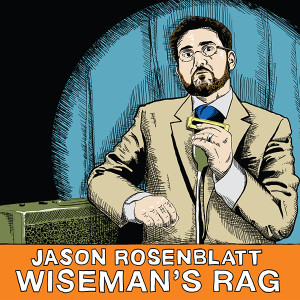 Jason Rosenblatt is well established as the leader of Shtreiml, the Montreal-based klezmer band, and Jump Babylon, a rock band whose songs centre on Jewish themes. But, on Wiseman’s Rag, Jason steps away from those projects to feature his own compositions, drawing on jazz, blues and roots music influences.

Jason is an innovative harmonica player who also plays piano and organ, sings, and offers some terrific playing as he surrounds himself with a tight quartet, including guitarist Joe Grass, bassist Joel Kerr and drummer Evan Tighe.

The album kicks off with the title track, an infectious swing tune on which Jason’s harmonica playfully interacts with Joe’ guitar. It’s one of several tunes in the 13-song set named for streets in the Mile End/Outremont area of Montreal. Others include “Fairmount Blues,” a jazzy blues tune that again has Jason and Joe delightfully trading licks; “Waltz Querbes,” a slower piece that features some nice work by Jason on harmonica and Joel on the bass; and “Hutchison,” a contemplative jazz tune on which each of the musicians gets time to stretch out.

Among the tracks that showcase Jason as a singer are “Cold Outside,” a jumping blues about the weather at this time of year; “You’ll Take the Highway,” a Chicago-style blues song; and the rollicking “You’ll Miss Me.”

The Brothers Nazaroff – The Happy Prince 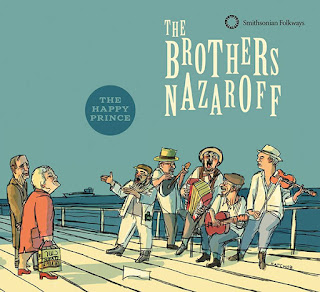 Not much is known about Nathan “Prince” Nazaroff, a Russian-Jewish musician and singer who immigrated to the United States in 1914. Apparently, he worked as an accompanist to the Russian Ballet Theater in New York and recorded a couple of songs for a 78-rpm record in 1928.

Nazaroff, who sang and played accordion and octofone (a variation of the mandolin), recorded 11 more songs, nine of which were released by Folkways Records on a 10-inch LP called Jewish Freilach Songs in 1954. This obscure album of Yiddish folksongs, including the familiar “Tumbalalaika,” showcased an exuberant performer whose energy and enthusiasm for the songs would influence performers like poet and singer Tuli Kupferberg, who co-founded the Fugs in the mid-1960s, and had a tremendous impact on the klezmer revivalists who discovered it in the 1970s and later.

About six decades after the release of Jewish Freilach Songs, some of today’s most accomplished klezmer musicians – including Michael Alpert, Daniel Kahn, Bob Cohen (not to be confused with Bob Cohen, the Canadian guitarist), Psoy Korolenko, Jake Shulman-Ment and Hampus Melin – gathered as The Brothers Nazaroff to record The Happy Prince, a joyous tribute album to Nazaroff.

From the opening bars of “Vander Ich Mir Lustig (While I’m Happily Walking),” it’s quickly obvious that this CD will be fun to listen to. Though the song is a list of the troubles that have befallen the protagonist – cold, rain, no mill, no cow, no wife – he’s in a happy mood celebrating life.

Other highlights include “Arum Dem Feier (Around the Fire),” a song popular in Jewish socialist circles, and “Fishalach (Little Fish),” usually known as “Fisherlid,” a moody piece written by the Yiddish poet Aliza Greenblatt who was the mother-in-law of legendary American folksinger Woody Guthrie and grandmother of Arlo Guthrie.

Perhaps the most curious song is “Krasnoarmeyskaya Pesn (Red Army Song).” One of the songs recorded by Nazaroff in 1928, and sung in Russian, it’s a tribute to the Bolsheviks who overthrew the cruel Russian czar in 1917.

The Happy Prince is my favourite album of Jewish music for 2015.