Growing slowly-but-surely over the past eight years, Montreal’s Folk Fest on the Canal, has matured into my favorite summertime event in Montreal. Staged on a much smaller and much more human scale than massive events like the jazz festival, this year’s edition of the Folk Fest on the Canal promises to be among its best yet.

Montreal’s Folk Festival on the Canal will include several indoor concerts in venues near the Lachine Canal and a weekend of free music on its banks. This year’s free events are taking place at a new location in the Lachine Canal Park – the Centennial Esplanade near the corner of Saint Patrick and Pitt Streets, about 1.5 km west of the old site.

As I noted in my review of Tom Rush Celebrates 50 Years of Music, Tom’s early Prestige and Elektra albums were among the first albums I bought when I was getting heavily into folk music in the late-1960s. So, while I’m a little young to have picked up on Tom right at the beginning of his career, I have been listening to Tom for a very long time. I still listen to those early recordings and to all the rest he’s made over the years.

Tom’s concerts are legendary and are always a great event. I’ve seen him a bunch of times at folk festivals over the years and I still vividly remember a series of four concerts I got to see him do at the Bottom Line in New York, circa 1978. And this will apparently be Tom's first Montreal performance since a concert for the Folk Music Club at Sir George Williams University in the mid-1960s  – so this concert will be a rare event.

As I noted, in my review of Small Source of Comfort, Bruce’s music has also been a major part of my musical life for a very long time. I first saw him live in Montreal at the short-lived Back Door Coffee House in 1970 or ’71, right around the time his first LP came out. I’ve seen Bruce play dozens of times since then in venues small and large and every concert has been a compelling experience.

Also on Friday, June 19, from 4:00 pm and again Saturday and Sunday, June 20 and 21, the festival shifts to Centennial Esplanade (corner of St. Patrick and Pitt) for lots of concerts and other activities – all free of charge – featuring a diverse selection of artists, many of whom are new to me. 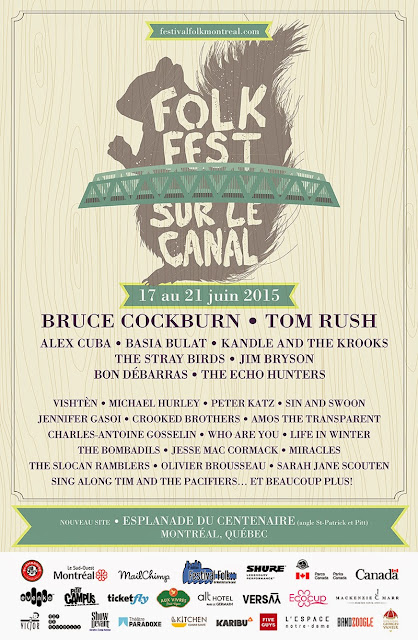 Highlights of the Friday schedule at Centennial Esplanade includes a concert by the terrific Acadian band Vishten and their contemporary approach to traditional music.

Among the Saturday highlights are concerts with The Bombardils, Sin and Swoon, The Stray Birds, and Basia Bulat. The Saturday concert I’m most looking forward to is with Michael Hurley, an obscure but legendary figure from the 1960s and ‘70s folk scene.

The complete schedule is available at this link.

Congratulations to Matt Large and Rebecca Anderson of Hello Darlin’ Productions and Carl Comeau of Hyperbole Music for founding the Montreal Folk Fest on the Canal and developing it into the great event it has become. 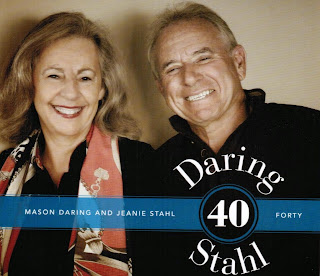 “What a surprise, that after a few decades, we would record another album,” write Mason Daring and Jeanie Stahl in the liner notes to Forty, an album that celebrates the four decades since they first worked together as a duo – and their first new recordings as a duo in well over three decades,

And how nice it is to hear this new music from old friends. Back in the late-1970s, I operated an independent booking agency for a few years and Mason and Jeanie were among the artists I worked with. They were among the top performers in the bustling New England folk scene back then and I started working with them on the strength of a great LP called Sweet Melodies in the Night that included several classics like Mason’s “Marblehead Morning,” Jeanie’s beautiful title song and definitive interpretations of songs by Bill Staines and Robin Batteau. During the time I worked with them they recorded a second great LP called Heartbreak. Years later, many of the songs from those LPs were collected on a CD called The Early Years, and now, decades after that, we have Forty.

By the time I wound down my agency, Mason was heavily into scoring films – notably for director John Sayles – and Jeanie went on to record several solo albums. While both have pursued other primary interests over the past three decades-plus, they have continued to get together to perform on occasion.

All this time later, Mason and Jeanie still sound great together on Forty’s 10 songs – half of them originals, half of them classics drawn from contemporary folk music, country, western swing and the Great American Songbook. Jeanie’s voice remains exquisite while Mason’s glides effortlessly on pieces like Roger Miller’s “King of the Road.”

There’s a timelessness to the songs on the album and originals like Mason’s “Too Much” and Jeanie’s “The Ring” stand tall next to the classics.

And while Forty is a delightful listen from start to finish, I’ll pick out a few of my very favorite tracks.

“The Ring,” is a lovely song which uses the metaphor of a 40-year-old ring in a jewel box for the seemingly quick passage of time that those of us of a certain age can now look back on. It also captures that passage of time celebrated with this album.

“It’s Funny,” written and sung by Mason, is a cool, love comes-love goes tune that would have been at home on a Frank Sinatra or Tony Bennett LP, while their versions of “San Antonio Rose” and Chattanooga Choo Choo,” – both of which I’m sure I remember Mason and Jeanie playing live back in the day – are full of playful swing.

Perhaps my favorite track, though, is Jeanie’s sublime interpretation of “Across the Great Divide,” a beautiful song written by my late friend Kate Wolf. Perfection. 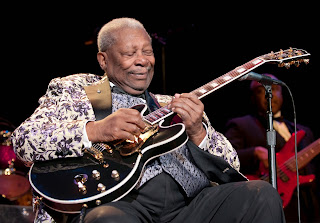 I was saddened to wake up to the news that B.B. King has passed away. He was always an inspiring artist. I saw him perform many times over the years and he was most gracious when I met backstage at the Molson Centre (now the Bell Centre) in Montreal before his 2001 concert there. Here’s my review from the February 2, 2001 issue of the Montreal Gazette of that concert.

B.B. King stands out sitting down

By Mike Regenstreif
Let the Good Times Roll! B.B. King was back in town last night and the good times, infectious, joyful good times rolled through the Molson Centre, planting big smiles on King, his band and the 4,500 or so in the crowd.

The only concession that King, 75, makes to age is that he now does the show sitting in a chair at the front of the big arena stage. But he still sings just as sweet on the ballads and shouts the blues with almost all of the power he had 50 years ago when Riley B. King, the Beale Street Blues Boy, became B.B. King, the undisputed King of the Blues.

The band started without the boss. Eight veteran musicians as tight a band as I've heard in years played a mid-tempo New Orleans second-line theme. Standout musicians including guitarist Leon Warren and keyboard ace James Tony, complemented by a rhythm section and four fat-sounding horns developed a groove that they would hold all night long. They slowed things down for a second number, a jazzy treatment of Summertime that had the crowd lounging in the hot Delta sunshine on a cold night in Montreal.

Seconds later, elation swept through the hall as King walked to his chair at centre stage. The crowd was on its feet shouting, King picked up the hollow-body Gibson electric that he calls Lucille and tore off a few riffs that seemed to tear the roof off the house.

King is an amazing guitar player, one of the most influential in music history. His lead lines positively sting as he bends the high notes like no one else. But, the thing is, King doesn't really play that much guitar. When he's singing, he's not playing, when he's listening to Warren or Tony take a solo, he's not playing, but he'll use his guitar in just the right places, providing just the right accents whether the tune is a swinging, jump blues or a quiet, soulful piece.

King plays another instrument brilliantly: the audience. Having done a couple of hundred shows a year for half a century, he's a master showman who knows how to work the room. He says just the right thing at just the right time. The facial movements and body language play to the folks down front and to those up top. And he's sharp as a tack. When his microphone lost its juice in the second song he started shouting out one-liners. "I thought it was just California that missed paying the electric bill," he told the laughing audience.

But, for all the show biz, it was a great night of music by a master musician. Whether he was delving into Memphis soul on Peace of Mind or jiving the crowd on Louis Jordan's Caldonia, King was absolutely terrific.