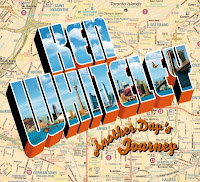 Ken Whiteley’s website notes that “his musical journey has taken him from jug band, folk and swing to blues, gospel and children's music.” With the exception of children’s music, Ken covers all of those grounds on Another Day’s Journey, which I think I can say without much reservation, is the finest solo album of his long career.

Of course, the term ‘solo’ is a bit of a misnomer as Ken, who sings and variously plays more than a dozen different instruments, works with cast of great collaborators – singers and instrumentalists – that changes, track to track, as the album unfolds on this journey through Ken's musical world.

The album begins with the title track, a joyous, uplifting song from the repertoire of the amazing Bessie Jones and the Georgia Sea Island Singers. Acoustic blues great Guy Davis, is Ken’s principal accomplice on this tune. Guy returns later in the CD to add his harmonies, harmonica and guitar playing to “Too Much Trouble,” a lovely, nostalgic original by Ken, and on a bluesy version of the traditional “Motherless Children.”

Kim and Reggie Harris – whose music and infectious personalities never fail to inspire – and sacred steel master Chuck Campbell join Ken for three songs including the inspirational “Butterfly,” and the poignant “No Answer,” both co-written by Ken and Reggie, and “I Want to Live So God Can Use Me,” an on-your-feet gospel number.

I’ve been on a listening to a lot of jug band music lately and two juggy tracks here are duets with Maria Muldaur, a central figure in the jug band revival of the 1960s and in its latest revival over the past few years. “Language of Love” and “Mike and Mary” are both recent Ken Whiteley originals that sound like they could have been recorded by the Memphis Jug Band in 1927, the Jim Kweskin Jug Band in 1965, or the Original Sloth Band in 1975.

Newfoundland swing guitarist Duane Andrews joins Ken for two other highlights on the album: Ken’s own “Old Wind Blow,” which also features some excellent harmonica work by Ken’s brother, Chris Whiteley, and “I Want To Be Happy,” an old swing tune that was a staple in the repertoire of the late, great Jackie Washington.

Ken Whiteley performs in Montreal on a split bill with Lake of Stew on Saturday, December 11, 8:00 pm, at Petit Campus. Click here for info.