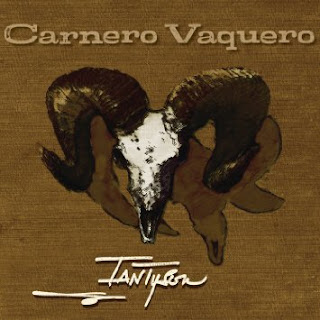 By now, the story of Ian Tyson’s losing much of the range in his voice is well known. And you can hear that loss on his last couple of albums. However, as I noted in a concert review about a year-and-half-ago, Ian’s got his voice back thanks to successful vocal cord surgery.

And that voice – familiar from those great Ian & Sylvia albums of the 1960s and early-‘70s and from so many great solo albums in the decades since – is in fine form on Carnero Vaquero a terrific collection that includes six new songs written or co-written by Ian, one of this country’s finest songwriters for more than a half-century.

My favorite of the new songs is “Wolves No Longer Sing,” a beautiful, poetic song co-written by Tom Russell about the changing West and the passage of the old ways. It’s even a lament for the days when music and songs came from people’s lives rather than a place of commerce. (The song first surfaced earlier this year in a version sung by Gretchen Peters on Tom’s brilliant folk opera The Rose of Roscrae: A Ballad of the West.)

Other favorites from among the new songs are a couple co-written with Kris Demeanor. “Jughound Ronnie,” is a contemporary take on the traditional “Black Jack David” story that is very much in the tradition of what Woody Guthrie did with the traditional source material in his “Gypsy Davy,” while “The Flood” uses the backdrop of the terrible floods in Alberta two years ago to set the scene for a story of a broken relationship.

Other highlights include the beautiful traditional cowboy song “Doney Gal,” Will Dudley’s infectious “Colorado Horses,” and new versions of “Will James,” Ian’s tribute to the great cowboy author (who was actually a French Canadian born in Quebec) and “Darcy Farrow,” Steve Gillette and Tom Campbell’s beautifully crafted traditional-style ballad first recorded 50 years ago by Ian & Sylvia.

Ian recorded the album on the ranch in Alberta with his working band and they know just what to do with these songs. At 81, Ian Tyson sounds as great as ever.

I was saddened to hear that traditional folksinger and storyteller Jack Nissenson passed away this week in Montreal at age 82.

Jack started performing traditional folksongs in Montreal in the 1950s and was a member of an early-‘60s folk group called the Pharisees.

Circa 1964, Jack and Peter Weldon, also a member of the Pharisees, met teenaged sisters Kate and Anna McGarrigle and formed the Mountain City Four, the most legendary of 1960s folk groups in Montreal.

After the Mountain City Four, Jack performed as a soloist and in several other groups – most recently the What Four, which also included Peter Weldon and Jane McGarrigle. He was also active in storytelling circles.

On July 2, 1962, when the still relatively unknown Bob Dylan performed at Shimon Ash’s Finjan coffeehouse on Victoria Avenue in Montreal, Jack recorded the set and, years later, the tape became one of the best Dylan bootleg albums.

Jack was one of my early mentors on the Montreal folk scene. I learned much from him in the late-1960s and ‘70s. Although I didn’t see him often in recent years, I continued to enjoy his friendship whenever our paths crossed.

The very sad news came through last night that Ronnie Gilbert has passed away at age 88.

Along with Pete Seeger, Lee Hays and Fred Hellerman, Ronnie was a founding member of the Weavers, the folk music group founded in the late-1940s that inspired and paved the way for all who followed.

The Weavers recordings occupy a valued place in my music library. So, too, do other recordings Ronnie made over the years in a duo with Holly Near, and as a member of HARP with Holly, Arlo Guthrie and Pete.

I got to meet Ronnie and hear her perform a number of times over the years at folk festivals. I particularly remember a delightful time having breakfast with her at the hotel during the Winnipeg Folk Festival sometime in the 1980s. She was very encouraging when I started the Folk Roots/Folk Branches radio show in 1994 and often responded graciously when I'd let her know that I was playing her music on the show.

The last time I saw Ronnie was September 17, 2004 when I was invited to the world premiere of the film, Isn’t This a Time! A Tribute Concert for Harold Leventhal, at the Toronto International Folk Festival. The film was a documentary on the tribute concert held the year before at Carnegie Hall for Harold Leventhal and told the story of Harold’s lifetime involvement in folk music and how he defied and masterminded the end of the McCarthy-era blacklist.

After the screening, there was a brief concert by the surviving members of the Weavers –  Ronnie, Pete, Fred and Erik Darling (who replaced Pete when he left the group in 1958) along with Eric Weissberg, who played bass and sang Lee’s vocal parts. A once-in-a-lifetime occasion for me to experience the Weavers live.

Ronnie was also an actor and practiced as a psychologist for several years. The New York Times has published a good obituary.