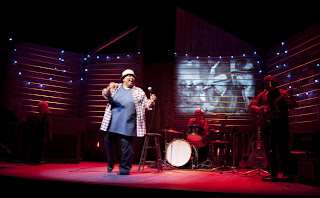 Big Mama: The Willie Mae Thornton Story continues at the National Arts Centre Theatre in Ottawa through May 11. This review is based on the performance of April 26.

Big Mama Thornton, was a larger than life blues singer from Alabama. Born in 1926, she was active from the 1940s until her early death, at age 57, in 1984. She was one of the essential links on the chain between the classic blues singers like Bessie Smith who preceded her and the rock ‘n’ roll and blues-rock performers like Janis Joplin, whom she directly inspired. Jackie Richardson, a profoundly talented singer and actor is magnificent as she brings Thornton to back to life, telling her story and singing some of the songs she performed during her career in Big Mama! The Willie Mae Thornton Story, Audrei-Kairen’s masterful summation of Thornton’s life story.

Set on Christmas Eve in a nameless blues bar, somewhere in Canada in the early-1970s, the play begins like a typical blues club set. The band enters – keyboardist Ron Casat in a red Santa hat – and launches into the opening number, a terrific version of Charles Brown’s “Merry Christmas Baby,” perhaps the greatest of all Christmas blues tunes, sung by guitarist and musical director Tim Williams.

Then, Casat introduces the star of the show, Big Mama Thornton, and as soon as Richardson as Thornton enters, it’s obvious she owns the stage. Dressed androgynously, as Thornton often did, in loose fitting men’s clothes, Richardson is riveting whether singing – in a voice that’s somewhat fuller and much less abrasive than Thornton’s was – or offering a series of monologues in which Thornton tells the story of her life – and, also a compelling history of the blues, from how it developed from the songs slaves sang in the fields, to the work of such important figures as Bessie Smith, Memphis Minnie, Muddy Waters, Johnny Otis and many others.

As Thornton’s life story unfolds, we hear of her early life and her discovery of music – like so many early blues artists, she began to sing in the church – as well such definitive events as witnessing Johnny Ace’s 1954 accidental death from a self-inflicted gunshot wound while playing with his gun, and a love life that encompassed both men and women.

And, of course, we hear Thornton’s describe recording her biggest hit, “Hound Dog,” in 1952. Her version was a number 1 hit on the Billboard R&B charts for seven weeks years before a tamer version became an early rock ‘n’ roll hit for Elvis Presley. Richardson brilliantly conveys Thornton’s bitterness at not receiving a share of the songwriting credits and royalties she felt she justly deserved. True or not, it’s a great case study of the kind of rip-offs of early artists that were all too common in the music business of the 1950s.

She also fondly recalls the emergence of Janis Joplin and how Joplin asked Thornton’s permission to record her song, “Ball and Chain.”

As an actor, Richardson’s timing is impeccable. She variously moves the audience to tears and to laughter at just the right moments. As the great interpretive singer that she is, Richardson captures the spirit of Thornton without being at all imitative. That her voice is quite different is irrelevant. This is a role Jackie Richardson owns. After seeing this production, I cannot imagine someone else playing the part.

Her interpretations of such numbers as “Hound Dog,” “Ball and Chain,” “Sassy Mama,” “Summertime,” “They Call Me Big Mama,” and so many others are superb. And part of the reason for that, of course, is the great band. Kevin Belzner, Ron Casat and Tim Williams are a terrific, versatile blues combo whether playing on the quietest numbers or the most raucous.

Lending to the authenticity of the performance is Richardson’s knack to get the theatre audience to respond as the audience might have at a great Thornton performance back in the day. During “Sassy Mama,” she randomly pulled three women out of the audience and each responded perfectly as they danced and sang along on stage.

I went to see Big Mama Thornton in Montreal at the Rising Sun club sometime in the late-‘70s. Although she was backed by the Stephen Barry Band – then, as now, Montreal’s best blues ensemble – she was clearly in decline and obviously not in the best of spirits. I recall feeling sad leaving the club after the show. In contrast, this performance by Jackie Richardson was invigorating, moving and inspired. Oh, how I wish I’d seen Thornton herself when she could perform like that.

Richie Havens, the great Greenwich Village folksinger who shot to prominence in 1969 as one of the hits of the Woodstock Festival – and the documentary film about it – died suddenly on Monday at age 72 after suffering a heart attack.

I didn’t know Richie that well, but always enjoyed and appreciated the brief times I spent in his company and in his audience.

When Richie was in Montreal in 1998 for a concert, I did a long interview with him in the afternoon before sound check for later broadcast on the Folk Roots/Folk Branches radio program.

We were sitting around the green room in between interview and sound check and I mentioned to Richie that Bruce Murdoch was a good friend of mine. Bruce – who by then was about 18 years into a 25 year hiatus from songwriting and performing – had had his first full-length LP, 33 1/3 Revolutions per Minute, produced by Richie. We got to talking about Bruce and Richie played a couple of lines from “Let’s Lay Down Our Drums,” one of Bruce’s songs from that 1971 LP during the sound check. He said it was a song he always meant to learn.

A few hours later, Richie did a beautiful version of the complete song during the concert.

In 2003, Richie played the Champlain Valley Folk Festival in Vermont where I was a main stage MC. We were chatting backstage and I thanked him for doing that Bruce Murdoch song in Montreal. Richie thanked me for reminding him of Bruce and his songs and that he felt compelled to work up the song after our chat.

Laura Smith – Everything is Moving 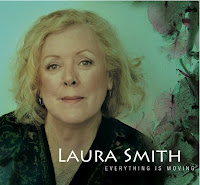 Laura Smith’s recordings were staples of the Folk Roots/Folk Branches radio program in the 1990s. Her re-imagined and rewritten version of the traditional “My Bonny” was a perennial request and she was my guest on the show in 1997 when she released It’s a Personal Thing, which turned out to be the last album she would release for 16 years.

A series of three unfortunate accidents led to years of debilitating pain and dependence on prescription narcotics which took control of her life. A moving CBC Radio documentary, The Blues & I – The Story of Laura Smith, broadcast in 2011, tells the story of those years and of the recovery which led her back to making music and performance.

Everything is Moving is a beautiful and inspiring return to form marked by five of her own compositions and superb interpretations of five other songs taken from tradition and other songwriters. “My life has been complicated and not particularly easy,” writes Laura in the liner notes. “I find myself realizing that fact furthers my connection to the people who like my music. We have all had rough times, and hopefully we have all come out of them stronger and happier than before. That is the spirit of this album.”

Indeed, there is a subtext of redemption, of recovery, of coming to terms with the hurdles of life that flows through these songs.

Two of Laura’s songs, “I Built a Boat” and “The Blues and I,” one of whose lines gives the album its title, metaphorically comment on both a longing for solitude and a deeper need not to be alone.

Her other originals include “John Keane’s Boys,” which sounds like it could be a traditional folksong from Nova Scotia; “What Goes Around,” perhaps my favourite song on the album, in which Laura reflects on “the puzzling relationship” she had with the man who raised her; and the beautiful and poignant “Safe Home, Sweet Light,” a farewell inspired by the deaths of a brother and old friend.

Among the others songs are “Lonely Waterloo,” a traditional song in which a woman laments the loss of her lover in the 1815 battle; Alex Sinclair’s “Magdalen McGillivray,” sung from the perspective of the Montreal-based wife of a fur trader two centuries ago who was declaring her independence on the realization of her husband’s other life and other wife in Fort William; and Kim Dunn’s “Inspiration,” a reflection on the creative process.

Laura’s versions of the other two songs on the album, “Gartan Mother’s Lullaby” and Micheál Ó h Ógáin’s “Horses and Plough,” both beautifully done, were inspired by the birth parents she grew up not knowing.

Laura singing throughout the album is supported by outstanding arrangements featuring such musicians as guitarists Paul Mills, who produced the album, and Tony McManus, bassist David Woodhead and keyboardist John Sheard. Guido Basso’s Flugelhorn adds much to a couple of songs.