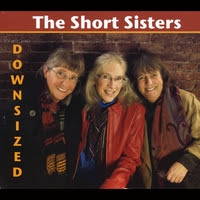 I really like what happens when three talented women singers come together in glorious harmony. Groups like the Wailin’ Jennys, the Good Lovelies, Herdman, Hills & Mangsen (Priscilla Herdman, Anne Hills, Cindy Mangsen) and the Marigolds – all of them very different in sound and repertoire – are quite wonderful with what they do with a song.

Along with the groups mentioned above, the Short Sisters are one of my all-time favorite trios of harmonizing women. They’ve been singing together since 1979, but Downsized is just their fifth album and their first since 2002 – and like its predecessors, the CD is a treat from the first song to the last. In fact, the opening paragraph I wrote 11 years ago for my Sing Out! magazine review of their previous album, Love and Transportation, is just as applicable to Downsized:

“The Short Sisters – Fay Baird, Kate Seeger and Kim Wallach – are not real sisters.  However, when their voices combine in sweet harmony on this set of traditional and contemporary songs drawn from a variety of sources, they sure do sound like siblings who have been harmonizing for a lifetime. It is also obvious that they have chosen and arranged these songs, to borrow a phrase from the late Townes Van Zandt, simply for the sake of the song and the joy of singing. When they’re not singing a cappella, the Short Sisters keep the arrangements tasteful and simple, acoustic guitars played by Kim and Kate, banjo by Fay and occasionally, some very nice harmonica work by Dean Spencer.”
The only thing I need to add is that Kate also plays autoharp on a couple of songs on the new album.

While all 16 songs in the hour-long set are delightful, a few of my favorites include “The Vikings,” a satirical tune by Jez Lowe (perhaps my very favorite British songwriter), a beautiful version “Ca’ the Yowes,” a Scottish song written or collected by Robert Burns, Kim’s “Home in Old New Jersey,” a delightfully arranged nostalgic piece about the state she grew up in, and “Tell Me Why You Like Roosevelt,” Otis Jackson’s tribute to the president who introduced the New Deal (this is the song my friend Jesse Winchester rewrote about 40 years ago to also pay tribute to the Canadian politicians whose policies allowed safe haven for Vietnam War resistors).

I was also delighted to hear the Short Sisters’ version of “Upon Finding Just One,” a terrific round written by my neighborhood pal Ann Downey, the traditional “Goin’ Down to Tampa,” and Lester Simpson’s “Twenty-Four Seven,” a labor song for these times we’re living in. 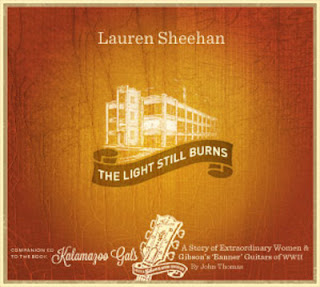 “Only a Gibson is good enough” was a banner slogan that adorned about 10,000 guitars produced by the Gibson Guitar Company of Kalamazoo, Michigan during the Second World War. With almost all the male workforce off to the War, the Gibson factory – like so many others at that time – employed mostly women. While the slogan itself was questionable (I’m more of a Martin-fancier myself), there is no denying that these “Banner” Gibsons were very good, sometimes great, instruments. A new book, Kalamazoo Gals: A Story of Extraordinary Women & Gibson’s “Banner” Guitars of WWII by John Thomas, was published this year.

The Light Still Burns by Lauren Sheehan is a companion CD to the book (author Thomas is a
co-producer of the album) on which she plays a different Banner Gibson built between 1942 and 1944 on each of the dozen tracks. With one exception – “Hard Times” by Gillian Welch and David Rawlings – these are all songs and tunes that could have been played on these guitars when they were brand new. In the CD booklet, Lauren notes these were songs that came to mind as she read the stories in the book and they range from jazzy blues like “I Wish I Could Shimmy Like My Sister Kate,” to “Home on the Range,” probably the most famous of all cowboy songs, as well as folk songs, parlor songs, gospel pieces and some intricate instrumentals (although I’ve heard many versions of “Soldier’s Joy” over the years, I didn’t know what soldier’s joy actually was until I read Lauren’s notes). 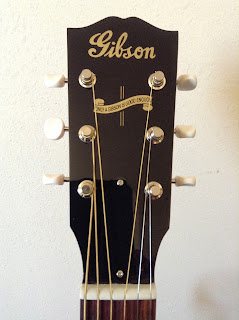 Given the circumstances of when these guitars were made, and who made them, the most poignant track is the medley of “When Johnny Comes Marching Home,” which dates from the American Civil War, and the traditional Irish song, “Johnny I Hardly Knew Ya.”

As I noted in my review of her earlier album, Rose City Ramble, Lauren is a lovely singer who knows how to use her voice to great effect and is an accomplished guitarist who crafts excellent arrangements for each of the songs she chooses. Most of the tracks are solo performances but she’s joined by guitarist John Schwab – also playing a Gibson Banner guitar – on “Soldier’s Joy” and by her daughter, Zoë Carpenter, who sings harmony on “Home on the Range” and a medley of “In the Sweet Bye and Bye/Keep on the Sunnyside.”

Each of Lauren’s previous albums has been a treat to hear and The Light Still Burns is no exception. The album title, by the way, comes from a Gibson magazine ad from 1943 – a reference to keeping the light burning while the boys were away at the war. 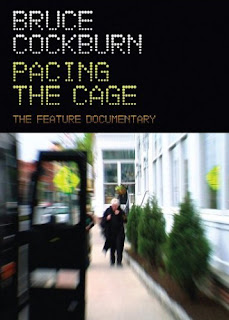 Pacing the Cage: The Feature Documentary – which debuted in a significantly shorter version on Vision TV and is now available in its full 65-minute version on DVD – is a compelling look at Bruce Cockburn, one of Canada’s greatest songwriters and guitarists. Written and directed by Joel Goldberg, and produced by Goldberg and Bernie Finkelstein, who has been Bruce’s manager since the beginning of his career, the film examines Bruce’s life and music from several angles and perspectives the influences of his spiritualism and activism.

Much of the filming took place during Bruce’s 2008 solo tour which formed the basis for his 2009 live album, Slice O Life: Live Solo, which I referred to in my Sing Out! magazine review as “the live Bruce Cockburn album I’ve wanted for years,” and at a couple of benefit concerts in 2009. While the film includes magnificent performances of several great songs, including “Pacing the Cage,” “All the Diamonds” and “Lovers in a Dangerous Time,” it is the insights provided in the interview segments with Bruce and several astute observers – including Bernie, Colin Linden, who produced Slice O Life and several others of Bruce’s albums, Sylvia Tyson, Michael Ondaatje, and Romeo Dallaire – that make this a worthwhile film.

Along the way, we hear Bruce explain the spiritual quest that led him to his own interpretation of Christianity, as well as his activism in the service of causes he supports. He also reveals his anxiousness as a performer when in one moody sequence he agonizes over what he felt was a show filled with errors that would have been imperceptible to anyone but himself. (I’ve seen Bruce play countless times since 1970 in venues ranging from tiny coffeehouses to major concert halls and big outdoor festivals and have never known him to give anything less than a stellar performance.)

I’ve interviewed Bruce several times for newspaper and magazine profiles and he did an extensive radio interview with me in 2002. I’ve always found him to be a thoughtful, contemplative person to talk to – and someone who is unafraid to discuss difficult subjects. In the film’s most striking moment he expresses regrets about mistakes he made and not appreciating his role as a parent at the time his now-adult daughter was a small child; mistakes he hoped he wouldn’t make again now that he is once again – in his 60s – the parent of a young child.

Pacing the Cage: The Feature Documentary is time well spent, certainly for Bruce Cockburn fans in particular, but also for anyone interested in an enhanced understanding of a particularly creative soul who has spent a lifetime in the pursuit of spiritual, political and musical truth.

Posted by Mike Regenstreif at 10:03 PM No comments: