The Good Lovelies -- Under the Mistletoe 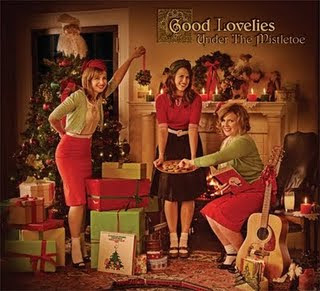 THE GOOD LOVELIES
Under the Mistletoe
The Good Lovelies
goodlovelies.com

I was talking to Kerri Ough of the Good Lovelies last night at the Canadian Folk Music Awards and mentioned that despite a low tolerance for a lot of Christmas albums, I do really like Under the Mistletoe.

So, what’s it about this album that makes it a winner for me?

Mostly, it’s their irresistible, three-part harmonies and wonderful sense of musicality that delightfully blends rootsy influences with a lot of swing. Even their version of “God Rest Ye Merry Gentlemen” swings. The musical arrangements, featuring some of Toronto’s finest players, are as delightful as the trio’s terrific singing. Then there’s a Christmas repertoire that, with a couple of exceptions, mostly avoids carols and religious songs in favour of secular songs about the holiday season.

Along with three fine originals, the Good Lovelies devote most of the CD to well known Christmas pop songs like “Rockin’ Around the Christmas Tree,” “Blue Christmas” and the best version of “The Chipmunk Song” since Simon, Theodore and Alvin’s original. My favourite, I think, is the Hawaiian-flavoured “Mele Kalikimaka (Merry Christmas).”

The Good Lovelies will be launching Under the Mistletoe with concerts on Friday, November 27, at Petit Campus in Montreal; Saturday, November 28, at the Black Sheep in Wakefield, QC; and Sunday, December 6, at Hugh’s Room in Toronto.

The Canadian Folk Music Awards made for a lovely evening last night at the Dominion-Chalmers United Church in Ottawa. The awards were supposed to have been at the Canadian Museum of Civilization across from Parliament Hill in Gatineau, QC, but had to be moved because of the strike at the museum.

There were some excellent performances including two-song sets by Yonder Hill, Old Man Luedecke, Les Charbonniers de l’Enfer, April Verch, Valdy and Catarina Cardeal & Mike Siracusa. The evening began in a grand style with a medley of tunes played by four fiddlers -- Bonita Leblanc, Anthony Brascoupe, Denis Lanctot and Terri-Lyn Mahusky -- from the Ottawa region who were in the balconies above the audience. Shelagh Rogers and Benoit Borque were the very able MCs.

The Good Lovelies were sitting beside Sylvie and me, so I got to be among the first to congratulate them when they got back to their seats after taking the award for new/emerging artist(s) of the year.

Congratulations to all the award winners.

Posted by Mike Regenstreif at 1:40 PM No comments: 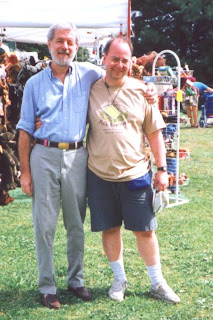 Pictured: Me and Jesse Winchester at the Champlain Valley Folk Festival on August 5, 2000. 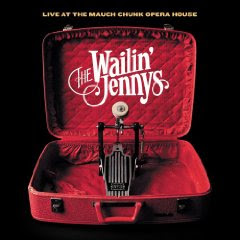 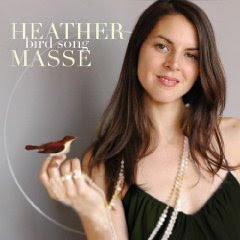 Live at the Mauch Chunk Opera House, recorded August 30, 2008, at an old theatre in Jim Thorpe, Pennsylvania, features what’s being referred to as version 3.0 of the Wailin’ Jennys. The original Winnipeg based trio – Cara Luft, Nicky Mehta and Ruth Moody – burst onto the folk scene in 2002 with an eponymously named EP and a fine full-length CD, 40 Days, released in 2004, that established the Jennys as one of the most glorious-sounding harmony groups around.

Cara had left the group and was replaced by Montreal’s own Annabelle Chvostek by the time they recorded their second full-length album, Firecracker, in 2006. After her two year-stint, Annabelle left the band and was replaced by Heather Masse, a New York-based singer-songwriter. With each personnel change, the Wailin’ Jennys have seemingly seamlessly adapted and evolved. There was something different, but consistently Jennyish, with each change.

As much as I’ve enjoyed the fully-produced tracks on their studio albums, I’ve always enjoyed the Wailin’ Jennys best on stage, when it’s just them, their stunning harmonies and the songs. And that’s how it is on this beautifully-recorded live concert set featuring six songs culled from their earlier albums and eight that they’ve recorded here for the first time.

As on the earlier albums, each of the Jennys takes her turns as lead singer with the other two adding sublime, hair-on-the-back-of-the-neck-raising harmonies. Most thrilling of all are the three a cappella songs in which their gorgeous voices are all that we hear. They do marvelous jobs on “Summertime,” the Porgy and Bess classic; Lead Belly’s “Bring Me Little Water Sylvie,” which they first recorded on the first EP, and which Heather now takes the lead vocal; and Heather’s own, too-short, “Paint a Picture.”

Among the other highlights are wonderful versions of couple of traditional songs, “Bold Riley” and “Sometimes I Feel Like a Motherless Child,” Jane Siberry’s “Calling All Angels,” Gillian Welch’s “Calling All Angels,” and a reprise of Ruth’s “One Voice,” from 40 Days which I think must be regarded as the Wailin’ Jennys’ signature song.

The Wailin’ Jennys are also their own band on this live set with Heather on upright bass, and Nicky and Ruth both playing guitars and switching off to several other instruments. The only other musician is the great fiddler, Jeremy Penner, who adds much to the arrangements he plays on.

Heather Masse, the newest Jenny, also has also just released Bird Song, her first, full-length solo album. It’s a fine effort that showcases Heather’s versatility as a singer and songwriter equally at home in jazz, folk, blues and rockabilly veins. In some ways, the album is reminiscent of the best of Norah Jones’ early work, but Heather seems to put herself into the songs in a way that the sometimes detached-sounding Jones didn’t always do.

On Live at the Mauch Chunk Opera House, Heather proved she can blend beautifully with two other singers. On Bird Song, she proves she and her songs can also stand beautifully on their own.

Posted by Mike Regenstreif at 10:51 PM No comments: 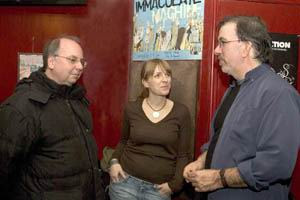 Pictured: Me, Rebecca Anderson and James Keelaghan at the Green Room on December 3, 2006.

Geoff Bartley -- Blackbirds in the Pie 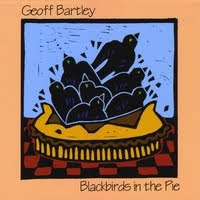 Geoff Bartley has been a mainstay of the Boston folk and blues scene for about four decades and I’ve enjoyed his singing, playing and songwriting since the first time I encountered him – circa 1973 – at a benefit concert there.

Blackbirds in the Pie includes a number of examples of Geoff’s always-excellent acoustic blues work including fine versions of such classics as Reverend Gary Davis’ “Candy Man,” featuring some delicious-sounding fingerpicking; the Bessie Smith classic “Send Me to the ‘Lectric Chair,” featuring some nifty clarinet playing by Billy Novick, one of my all-time favourite horn players; and “Backwater Blues” that’s filtered through both Ma Rainey and Lightnin’ Hopkins.

From the folk canon, Geoff does beautiful jobs on “Central Square,” a previously unrecorded Tom Paxton song, that nostaligically recalls a found and lost love, and on Malvina Reynolds’ classic, “God Bless the Grass.”

Geoff’s also a fine songwriter and shines on such tunes as “Bozos on the Road No. 2,” a jazzy and very funny remake of an earlier tune that he sets from the P.O.V. of a gas-guzzling, cell phone-talking driver of a big SUV; “The Song of Imaginary Gifts,” a list of imaginary gifts for a special person that really boil down to love, the best gift of all; “Redemption,” a slow, beautiful, slide guitar instrumental played on a resonator guitar; and “Lemonade Redux,” a ragtime guitar instrumental that I think would make my late friend, Dave Van Ronk, smile.

From Geoff’s first-rate – mostly solo – interpretations of folk and blues standards, to his own fine songs and instrumentals, Blackbirds in the Pie is an engaging set by an always worthy artist.

Posted by Mike Regenstreif at 10:41 PM No comments: 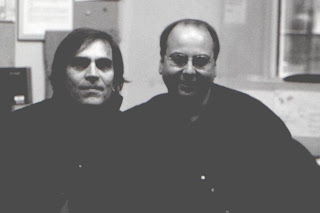 Pictured: Eric Andersen and me in the CKUT studio during Folk Roots/Folk Branches on November 9, 2000.

Posted by Mike Regenstreif at 7:44 AM No comments: 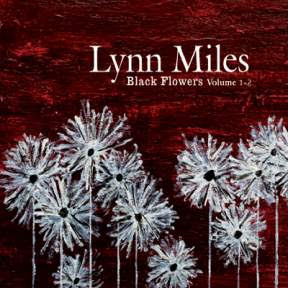 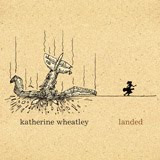 Lynn Miles has long been one of my favourite confessional singer-songwriters. Although, I’ve enjoyed most of her earlier recordings, I’ve always preferred hearing her perform live in solo settings which allow both her beautiful voice and her excellent songwriting to shine. Sometimes, I’ve thought the studio arrangements on Lynn’s albums have distracted me from what I really wanted to hear.

Recently, Lynn has undertaken to record basic acoustic versions of her entire song catalogue. The two Black Flowers CDs, which she first released independently and individually, and which are now packaged together in this 2-CD set, collect the first 20 songs recorded in that undertaking.

Without other musicians on these tracks, my attention as a listener is, indeed, focused directly on Lynn’s voice and the songwriting. Listening, I’m thrilled to really hear these songs on a much deeper level than I have before. I’m really looking forward to hearing many more of Lynn’s songs recorded and re-recorded this intimately.

Lynn, along with Scott Merritt, is also the co-producer of Landed, Katherine Wheatley’s excellent new recording focused mostly on songs about broken relationships.

Although there are a few uptempo tracks, most of Katherine’s songs on Landed are quite intimate and personal. But, unlike some songwriters, she doesn’t make us wallow in her misery. These are songs that help us understand the vagaries of the human heart. Listening, I was reminded of something my old friend, Rosalie Sorrels, once told me after a relationship ended: “He broke my heart, but I got a bunch of great songs out of it.”

Posted by Mike Regenstreif at 7:41 PM No comments: