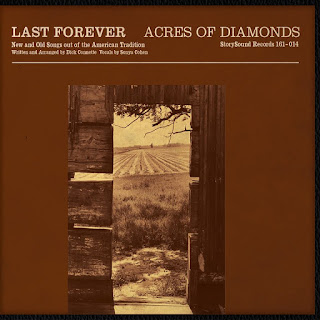 In 1997, I was highly taken with Last Forever, a self-titled album by Last Forever, a project centered around composer-arranger Dick Connette and singer Sonya Cohen that included highly reimagined versions of traditional folksongs like “In the Pines” and “Ain’t Going Down to the Well No More” and new compositions of Dick’s that seemed inspired and informed by folk music. I played the album a lot on the Folk Roots/Folk Branches radio program.

They did a second album in 2000, Trainfare Home, which I loved just as much. I played it a lot on the radio show, reviewed it in Sing Out! magazine (see below), and did phone interviews with Dick and Sonya for the show.

The tour-de-force is the finale – variations on the traditional “Boll Weevil Blues,” an amazing 13-minute performance that begins with a string section playing classical-style variations on the folk music theme before the folk-style instrumentation and Sonya’s lovely, but oh so powerful, voice come in. Eventually, the folk and classical elements blend seamlessly leading to a hair-raising ending of Sonya’s vocalizations on top of a single violin bowing the very highest notes.

Although each of the other songs could well be cited as a highlight, I’ll mention “Lady Franklin’s Lament,” a reimagined version of the traditional ballad in which Sir John Franklin’s wife laments his death while searching for the Northwest Passage through the Arctic Ocean in 1845; “Mr. Olio,” a sad but beautiful set piece about an old vaudevillian co-written by Dick and Loudon Wainwright III; and “Acres of Diamonds,” a catchy, very folkish song, originally written by Dick for Loudon’s High Wide & Handsome: The Charlie Poole Project.

Every time I’ve listened to this album, I’ve discovered something new in the music, the lyrics, the strikingly original arrangements, the beautiful singing, or the totality of it all. I’ve returned often to the early Last Forever albums over the past 15 years and I expect I’ll be returning often to Acres of Diamonds.

Sonya was born to a folk music family as the daughter of John Cohen of the New Lost City Ramblers and the late Penny Seeger. There’s a photo I recall – I’m sure it was taken by David Gahr – of Sonya being held as a small baby by her uncle, Pete Seeger, as he spoke on stage at the 1965 Newport Folk Festival. Sadly, Sonya died of cancer on October 9, a week before Acres of Diamonds was released. She was just 50 years old. 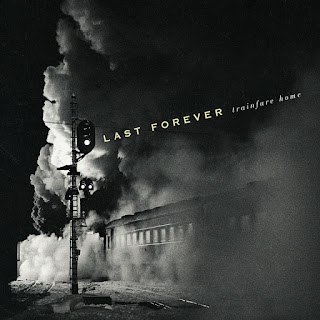 Dick Connette spent much of his composing career working in neo-classical and avant-garde music before turning his attention to rearranging traditional folk songs and writing new songs inspired by traditional music. Last Forever was formed when he began collaborating with vocalist Sonya Cohen, the daughter of New Lost City Rambler John Cohen and niece of Pete, Peggy and Mike Seeger.

Their first album, released in 1997, was a fascinating blend of old and new music that quickly became a favorite of mine. This sophomore effort from Connette and Cohen is just as fascinating and is one of the best releases of the past year. Like Last Forever’s first album, this one mixes old songs recast in new ways with new songs based on old melodies or lyric phrases.

Among the already-familiar songs is “Louis Collins/Spike Driver Blues,” a medley of two Mississippi John Hurt songs that begins with Cohen’s voice multi-tracked to sound like a choir on a brief refrain from “Louis Collins” before the familiar guitar notes of “Spike Driver Blues” come pouring out of Connette’s spinet and the accompanying violins, saxophone, bass, harmonium, guitar and drums begin to emulate the sound of a train as Cohen sings the lyrics. It’s all so very familiar and so very different at the same time.
On most of the original material, Connette draws on traditional elements in his compositions. “Down the Road,” sung from the point of view of an emancipated slave in the 1860s, uses “Feather Bed,” the old jug band song as its melodic starting point. The upbeat arrangement features Connette’s spinet interacting with trombone, banjo and drums. Connette’s “Bachelor’s Hall” borrows the traditional melody from “Pretty Saro” for a drawing room arrangement.
One of the most ambitious of the original songs is “Oklahoma,” which encapsulates some of the history of the state stretching from the forced relocation of the Cherokee from Georgia to the devastating bombing by a domestic terrorist in 1995.
With the new music they are creating, Connette and Cohen are proving that there is much to learn from, and to be inspired by, in traditional folk music while they create something new and different. 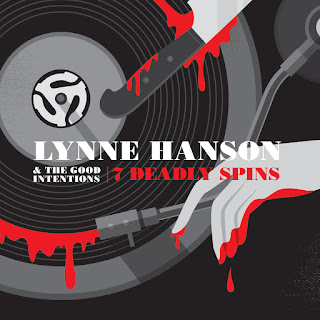 Just in time for Halloween, Ottawa-based singer-songwriter Lynne Hanson has released 7 Deadly Spins, a thematic EP that adds seven new songs – four written by Lynne and three more that she co-wrote – to the murder ballad traditions in folk, rock and real-deal country music.

Lynne sings in character in most of these songs, either as an observer like the title persona in the Waitsian “Gravedigger,” or more often, from the perspective of a killer like the wronged – and possibly battered – wife who killed her husband in “Water’s Edge.”

One of the most interesting songs is “Cecil Hotel,” in which a farmer who went into a rage and killed the banker who was going to foreclose on his farm is holed up at a skid row hotel. Curious, I Googled Cecil Hotel and discovered it was an infamous hotel in Los Angeles that had been both home to several murderers on the lam over the years and the site of several murders. I assume Lynne knew that and purposefully chose that name for the song and the hotel in it.

Other highlights include “Black Widow,” about a woman who’s been married five times and whose husbands quickly “drop like flies it never ends well”; and “Run Johnny Run,” co-written with producer Lynn Miles, that seems to be about a late-night incident in which five people were left dead after a violent confrontation and arson to cover it up.

Most of the songs strike me as being set in rural areas or small towns and I can imagine them as black-and-white film noirs from the 1940s or ‘50s.

Various Artists – Joy of Living: A Tribute to Ewan MacColl 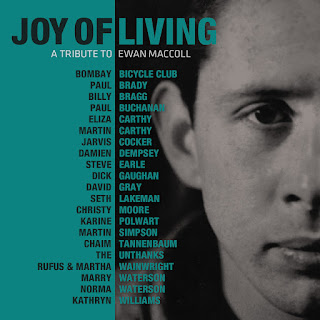 Last month, I attended a Friends of Fiddler’s Green concert in Ottawa to launch their new album, Old Inventions, and Ian Robb introduced his song, “The Reason Why,” with an anecdote about the first time he sang, as a floor singer, at the Singers Club in London when he was a teenager.

After Ian sang, he was approached by Ewan MacColl (1915-1989), the legendary British folksinger, songwriter and activist who ran the Singers Club with life partner Peggy Seeger. MacColl asked Ian why he sang whatever song it was that he had just performed. The lesson Ian took from the encounter was that a singer (or songwriter) should always have some sort of convincing reason for investing themselves in a song.

Although I never had an opportunity to see MacColl perform live, I have listened to many of his recordings, have had conversations about him with Peggy, and have no doubt that there was always a reason why for every song he ever sang or wrote.

To mark the centennial of his birth, his children with Peggy – Neill, Calum and Kitty MacColl – have assembled Joy of Living: A Tribute to Ewan MacColl, an outstanding, 2-CD collection of 21 of MacColl’s songs performed by an eclectic array of singers from both sides of the Atlantic – some of whom I’ve known personally for many years, others whose own music I’ve listened to over the years, and a few of whom I’ve heard for the first time on this album. And each of them leaves absolutely no doubt as to their reason why.

But the songs of MacColl’s written from others’ perspectives that have always moved me most are those about the Romany travelling people – also known as Gypsies, a term now considered to be derisive. Among those songs included here are poignant versions of “Thirty-Foot Trailer” by Eliza Carthy, “Freeborn Man” by Paul Brady, “Moving On Song” by Norma Waterson and “The Terror Time” by Karine Polwart.

Some of the other highlights here include a beautiful version of “Sweet Thames, Flow Softly,” mainly credited to Rufus & Martha Wainwright, but which equally belongs to their half-sister, Lucy Wainwright Roche, and cousin, Lily Lanken; Montreal singer Chaim Tannenbaum’s exquisite version of “My Old Man,” a song in which MacColl both recalls his father and offers advice to his son; Steve Earle’s version of “Dirty Old Town,” MacColl’s portrait of Salford, the town of his birth; and the finale, a sweet interpretation of “The Joy of Living,” an end-of-life celebration of life and farewell to loved ones sung by David Gray.

And, of course, no tribute to Ewan MacColl would be complete without a version of “The First Time Ever I Saw Your Face,” his love song for Peggy which has become a standard recorded by countless folk and pop artists. It’s convincingly performed here by Paul Buchanan.