Folk Roots/Folk Branches with Mike Regenstreif is a thematic program streamed on the radio service at Roots Music Canada. – http://www.rootsmusic.ca/

A new show debuts every Saturday and repeats daily through the rest of the week.

This show can be heard at http://www.rootsmusic.ca/radio/ on:

The times listed are Eastern Standard Time. Please adjust the schedule for whatever time zone you’re in.

Programming note: This program was recorded on January 25 and I mentioned at the end of the show that next week’s theme would be a visit to Leonard Cohen’s Tower of Song. That program will be delayed by one week. 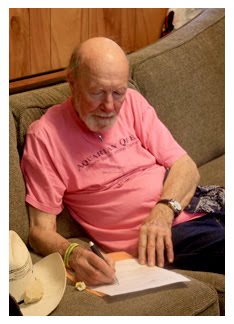 I was deeply saddened this morning to awake to the news that Pete Seeger, always one of the most inspiring people I’ve ever known, passed away of natural causes at age 94. He His wife, Toshi, died last year after nearly 70 years of marriage.

In a post marking Pete’s 90th birthday, I recalled listening to Pete’s music since I was a young kid and that I was 20 years old in 1974 when I first met and worked with him when I was an area co-ordinator/stage manager at the Mariposa Folk Festival and Pete’s concert was on my stage.

I am grateful for having had the opportunity to have known Pete for most of my life and to have enjoyed some small measure of friendship.

I’ve interviewed Pete a number of times, both for radio and newspapers. When Pete did a surprise 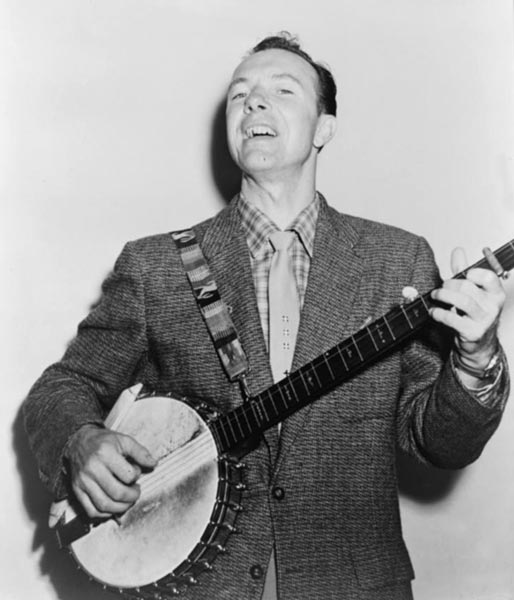 Canadian tour of small venues in 2008, I interviewed him for the July 3, 2008 issue of the Montreal Gazette (the article also appeared in several other newspapers).

The first thing Pete said to me when I called him for the interview was, “What can I possibly tell you that you don’t already know?”

There was – there is – always a lot to learn from Pete Seeger.

Here is that article.

Mike Regenstreif
Special To The Gazette

The last time I interviewed Pete Seeger was in 1999 just as he was about to turn 80. He was planning to stay close to his Hudson River Valley home and just play a few songs occasionally for school kids or at benefit concerts. It was unlikely, he said then, that he’d travel far enough from home to perform in Montreal again.

Almost a decade later, though, the still-vigorous Seeger is on his way back to Montreal. His July 5 concert here kicks off a quickly-arranged, and quickly sold-out, tour of small venues that also takes him to Toronto, for two nights, Kingston and Ottawa in the company of acoustic blues revivalist Guy Davis and his grandson, Tao Rodriguez-Seeger of the folk-rocking Mammals. The three will share the stage, swapping songs and backing each other.

Reached at his home overlooking the Hudson River in upstate New York, Seeger told me he has fond memories of performing in Montreal.

“Sam Gesser hired me when nobody else would,” Seeger said, referring to the late Montreal impresario who broke into the concert business with a Seeger concert in 1952 when most of the folksinger’s performing opportunities were lost to the McCarthy-era blacklist. Gesser, who died April 1, brought Seeger to Montreal often over the next four decades.

Seeger is one of the most revered musicians of all time and has been a major influence on the likes of Bob Dylan, Bruce Springsteen – who’s done two albums of songs he learned from Seeger LPs – and almost everyone else who’s picked up a banjo or acoustic guitar in the past 60 years.

Seeger’s lengthy résumé includes forming two legendary folk groups: the Almanac Singers, with Woody Guthrie, before both shipped out to serve in the Second World War; and the Weavers, the group that brought folk music to the pop charts with "Goodnight Irene" and "Tzena Tzena Tzena" in 1949 before being blacklisted. Seeger has written or co-written scores of enduring songs, including "Where Have All the Flowers Gone" and "If I Had a Hammer," has made hundreds of recordings, and has been at the forefront of the civil rights, peace and environmental movements.

“I really don’t take concert tours anymore,” Seeger said when asked about what made him decide to do this four-city Canadian jaunt. “But my grandson, Tao, is a great performer, and Guy Davis is a great performer, so I decided to do a few things with them. The five concerts I’m doing in Canada are more than I’m doing almost anywhere else.”

Talking to Seeger now, he seems motivated by many of the same concerns that spurred his activism decades ago. “I think there’s a chance the human race will survive,” he said. “I’m not as pessimistic as I was after Hiroshima,” referring to the atomic blast that spurred a lifetime’s devotion to the peace movement. During the Iraq War, Seeger has been leading weekly peace vigils near his home.

One of Seeger’s greatest successes as an activist has been leading the movement to clean up the Hudson River. The river was horribly polluted when he founded the Clearwater organization in the 1970s. Now, he points out, people swim safely in many parts of the Hudson.

In separate interviews, Guy Davis and Tao Rodriguez-Seeger both spoke about being directly influenced by Seeger as children.

Davis’s parents, the actors Ossie Davis and Ruby Dee, were longtime friends of the Seeger family. In 1960, eight-year-old Guy developed a love for the banjo while attending Camp Killooleet, a kids’ camp in Vermont that was run by John Seeger, Pete’s brother. Ossie Davis bought his son a banjo and the youngster learned the instrument from Seeger’s classic book, How to Play the Five-String Banjo.

“Over the years, Pete sparked my interest in Big Bill Broonzy and Lead Belly, both of whom he had known, and my interest in the 12-string guitar began to grow. One thing led to another and I wound up going on the road with Pete as an opening act in the mid-70s,” said Davis. “This tour’s going to be a wonderful hoot.”

Rodriguez-Seeger grew up playing music with his grandfather and began performing concerts and recording with him as a teenager in the 1980s. “We played concerts together for about 13 years.” he recalled.

Wanting to articulate his own musical ideas, Rodriguez-Seeger formed a trio with Sarah Lee Guthrie, Arlo Guthrie’s daughter, and her husband, Johnny Irion, in 1999. Two years later, he hooked up with Ruth Ungar and Michael Merenda as the Mammals.

With the Mammals currently on hiatus, Rodriguez-Seeger recently performed a concert with his grandfather and Davis at the Franklin Delano Roosevelt Presidential Library and Museum in Hyde Park, New York.

“We had a really good time,” said Rodriguez-Seeger. “We got home and Grandpa was bouncing off the wall with excitement. ‘Let’s do that again,’ he said.”

The Canadian tour was quickly arranged and generations of folk fans eagerly snapped up all available tickets.

The Claytones- If I Needed You
Reserva (Rip Roar Music)

Monkeyjunk- You Made a Mess
All Frequencies (Stony Plain)

Telephone conversation with Bill Garrett, Andy Frank and Steve Pritchard.
Me, Bill, Andy, and Steve and are among the radio hosts with programs on the web radio service at Roots Music Canada. http://www.rootsmusic.ca

The next two songs punctuated our studio visit with Bobby Watt.

Bobby Watt- My Love is Like a Red, Red Rose
Live in the studio

The show is now available for online listening. http://cod.ckcufm.com/programs/129/15521.html

Posted by Mike Regenstreif at 4:15 PM No comments: