Joan Baez in Kitchener, Montreal and Ottawa this week 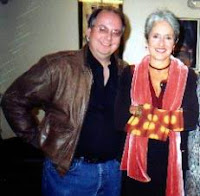 Ottawa is folk music central this coming weekend as it hosts the annual Ontario Council of Folk Festivals  (OCFF) conference. I’m going to step out of the conference for a couple of hours on Saturday evening for the Joan Baez concert, five blocks away at the National Arts Centre.

Half a century after a still-teenaged Joan took the 1959 Newport Folk Festival by storm, she remains a great performer. The last time I saw her perform – 2003 in Burlington, Vermont – Joan was remarkable.

According to Joan’s website, her band includes three great acoustic musicians: John Doyle, the great Celtic guitarist; Dirk Powell, an incredible multi-instrumentalist who’s one of the most innovative of today’s old-time and Cajun musicians (I’ve hosted folk festival workshops a couple of times with Dirk, see the photo in the post below, and he is truly amazing – when Linda Ronstadt was a guest on Folk Roots/Folk Branches, she raved about Dirk’s playing on the Zozo Sisters CD she’d just released with Ann Savoy); and virtuoso bassist Todd Phillips, whose work, 30 years ago, with the original David Grisman Quintet redefined the possibilities in acoustic music.

Addendum (October 13): As noted, the above information about who is in Joan's band was found on her official website. However, I'm now given to understand that Dirk Powell will be the only musician with her. -MR

Here’s a CD review I wrote for the September 4, 2008 issue of the Montreal Gazette.

Almost 50 years into her recording career, Joan Baez teams with producer Steve Earle and a select group of acoustic musicians for one of her strongest albums in three decades. Although these songs – by such writers as Earle, Eliza Gilkyson, Tom Waits and Diana Jones – are all of recent vintage, each has a timeless quality to it. Waits’s title track, for example, written from the perspective of a soldier returning home, dates from the current Iraqi War. But it could have come from any other war time. The most beautiful song is Gilkyson’s "Rose of Sharon," an adaptation of the biblical "Song of Solomon." Baez’s voice, though lower than it was in her youth, is a remarkable instrument still capable of great beauty and power.