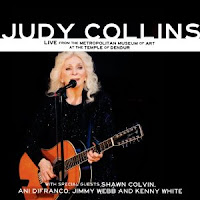 JUDY COLLINS
Live at the Metropolitan Museum of Art at the Temple of Dendur
Wildflower
wildflowerrecords.com

Judy Collins, who gracefully bridges the worlds of folk, art and popular song, has been one of our most compellingly elegant singers for more than 50 years – a milestone celebrated at this concert recorded at the Metropolitan Museum of Art in New York. Her voice is as beautiful as ever as she moves through a 12-song set encompassing both classic and recent material.

Although known primarily as an interpretive singer, Judy is also a very fine songwriter and includes three of own songs in this set. She begins with “Open the Door,” which was titled “Song for Judith (Open the Door)” when she originally recorded it in 1971, is a perfect invitation-in-song. “Since You Asked,” dating from the mid-1960s, is a beautiful love song performed this time as a duet with Shawn Colvin, while the more recent “In the Twilight” evokes the memories of an older woman who has lost them to Alzheimer’s disease.

Among the most overtly folk-rooted songs are Woody Guthrie’s “Pastures of Plenty,” sung as a duet with Ani DiFranco in a surprisingly effective collaboration, and Bob Dylan’s “Mr. Tambourine Man,” which she precedes with a story of hearing Dylan write the song, one of his most enduring classics. Judy’s much more mature phrasing on this version of “Mr. Tambourine Man” makes it even more convincing than it was on her 1965 recording.

Other songs that seem even more convincing decades later include Joni Mitchell’s “Both Sides Now,” “Moon is a Harsh Mistress,” with composer Jimmy Webb at the piano for the occasion, and a sublime piano, cello and voice arrangement of Stephen Sondheim’s “Send in the Clowns.”

I’m surprised, I suppose, at the absence of any of the Leonard Cohen songs that have been such an important part of Judy’s repertoire and, perhaps, by the inclusion of “Diamonds and Rust,” Joan Baez’s recollection of her love affair with Dylan, written a decade after the fact. Although there’s no denying the beauty and grace in Judy’s version, it is such a personal song about such a well known relationship that I find it odd hearing it from anyone but Joan – a reaction I also had when I heard Judy and Joan’s duet of “Diamonds and Rust” a few years ago.

Live at the Metropolitan Museum of Art at the Temple of Dendur is a beautiful and intimate concert recording.

The Pogues – The Very Best of the Pogues 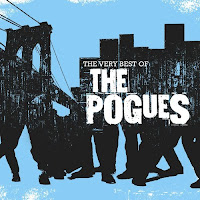 THE POGUES
The Very Best of the Pogues
Shout! Factory
pogues.com

When they burst on the scene in 1984 – 29 years ago – with their first LP, Red Roses for Me, the Pogues were something special playing traditional Irish folksongs, and some in-the-tradition contemporary material, with an attack that was equal parts Clancy Brothers and the Clash. By the second album, Rum, Sodomy and the Lash, a year later, their original material, good enough that much of it could be mistaken for traditional, was dominant.

The Pogues in their prime were a great band fronted by Shane McGowan, an inspired singer and songwriter, with a seeming predilection for self-destruction and unpredictability that meant their star shone all too briefly before flaming out.


Among the highlights are such exceptional McGowan songs as the rousing “If I Should Fall from Grace with God,” “Sally MacLennane,” whose drunken main character seems like it could have been inspired by the author, and “Body of an American,” as great a song about an Irish wake as I’ve ever heard.

Of course, “Fairytale of New York,” McGowan’s fabulous duet with the late Kirsty MacColl, one of the best Christmas season songs ever, is included, as is their compelling version of Ewan MacColl’s “Dirty Old Town.”

Listening to these songs, I'm reminded how great the Pogues were in those days. The songs are as fresh and as vital now as they were back in the day – in fact, thanks to remastering, they sound better than ever.