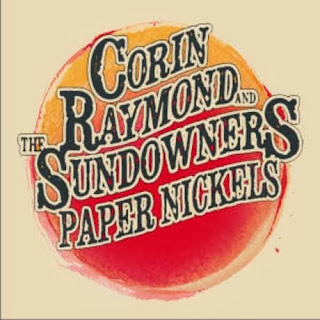 I discovered the music of Toronto singer-songwriter Corin Raymond in 2009 through a fine album called There will Always be a Small Time and its title track which I described as “a near-perfect piece of songwriting that captures the essence of why musicians are compelled to play music, of why songwriters are compelled to write songs, of why they’re compelled to play their music and perform their songs for whoever’s wanting or willing to listen, and of why they make records to sell from the stage. It’s a song that celebrates the human connections that are possible when real musicians play real music for real people without any kind of corporate filters.”

For his latest album – Paper Nickels, a 2-CD live set recorded with the Sundowners: Treasa Levasseur on accordion and piano, David Baxter on guitar and mandolin, and Brian Kobayakawa on upright bass – Corin has taken the small time to new heights by not only enlisting support by his fan base to finance the album, something many artists now do, but by getting them to do it by sending in their Canadian Tire money. He collected enough Canadian Tire money – those paper nickels – to finance the two CDs within a hard cover booklet that includes the story of the album (“The Great Canadian Tire Caper of 2012”), stories about the songs and their writers (only four of the 20 songs were written or co-written by Corin) and the lyrics.

The songs Corin has chosen for this project are mostly written by other songwriters working that same small time for the same kinds of rewards and satisfaction that Corin referred to in that 2009 song.

While I enjoyed the album from start to finish, some of my favourite tracks include Max Metrault’s “Anastasia,” a lovely postmodern love song that makes you wonder what some of it is about while actually leaving no doubt about what it all means; Scott Cook’s “The Lord Giveth (and the Landlord Taketh Away”), an infectious ditty about little guys, big guys and the eternal class struggle; “Nine Inch Nails,” by Ridley Bent and Dustin Bentall, a clever little tune about music-crossed lovers; and David Ross Macdonald’s lovely “Time to Leave,” in which the narrator offers sage advice to a friend, or perhaps to himself, about recognizing the end of a relationship and the time to move on.

Another favourite is “Little Bird,” on which Treasa Levasseur takes over the lead vocal for a beautiful version of Jonathan Byrd’s heartfelt love song.

The Sundowners provide fine backup to Corin’s vocals and the live recording has a friendly feels-like-you-there in the small club ambiance that is helped by leaving in the between song patter.

Posted by Mike Regenstreif at 5:07 PM No comments: 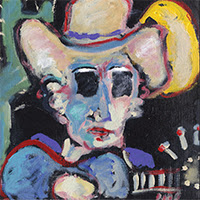 I’m on record as saying I think Tom Russell is the best singer-songwriter of my generation – the generation that came along 10 or 15 years after Bob Dylan bussed into New York from Minnesota and went to see Woody Guthrie in the hospital almost 53 years ago.

Tom has been incredibly prolific over the years turning out album after album – many of them brilliant concept albums – of stellar songs. And, like Dylan, there’s been a significant output of great Tom Russell songs that for whatever reasons have not been included on his official albums or on the limited edition bonus EPs that he’s released over the years.

Back in 2002, Ed Becker and John Yuelkenbeck assembled Museum of Memories 1972-2002, a collection of previously unreleased rarities, including demos and live tracks, most of which were great songs. Eleven years later, John has put together a second collection – Museum of Memories Vol. 2: 1973-2013 – that is chock full of more great material. 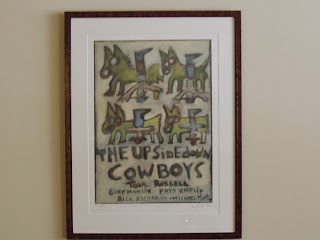 I know Tom’s music pretty well and there are only a few here that I’ve ever heard before: “Small Engine Repair,” a 2001 radio performance that was offered as a download bonus to people who bought the lyric book to Borderland; Tom singing a live version of “The Outcast,” which was originally sung by Dave Van Ronk on The Man from God Knows Where, Tom’s great folk-opera; and the two songs here that Tom didn’t write, the Irish song, “Fields of Athenry,” that I know from versions by Danny Doyle and Petra Haden, and the Mexican “Cancion Mixteca,” which is performed in a medley with the spoken “Donkey Show,” an early version of what evolved into “Border Lights” on the fascinating Hotwalker, Tom’s brilliantly-conceived audio collage of songs, poetry and spoken word that paid tribute to great, but seemingly lost aspects of American culture.


So most all of these 21 songs running some 76 minutes were new to me – and I bet that if they’re new to me, they’ll be new to almost everyone else reading this review. The album is sequenced in reverse chronological order beginning with a new recording of “Old Saltillo Road,” a co-write with Greg Trooper from the 1980s, about Elvis Presley and his boyhood home. The version included on the CD was recorded at a recent sound check. The always excellent Thad Beckman, Tom’s guitarist of the last several years is heard with him on this song. A superb musician, Thad is a most worthy successor to the great Andrew Hardin, who played with Tom for about 25 years and is heard on many of these tracks.

I mentioned Hotwalker, Tom’s exploration of lost aspects of American culture – a theme he’s returned to frequently over the years. That song about Elvis is certainly part of that body of work along with several other great songs here including “In the American Grain,” which reflects on American culture and American folksongs; “The Coat Hank Williams Wore,” a deservedly critical song inspired by a visit to the Rock and Roll Hall of Fame; and “Neighbors (Bill and Joan),” about the bizarre 1951 killing of Joan Vollmer by her husband, the beat writer William S. Burroughs. 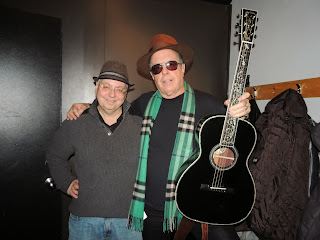 A few other highlights include “de Kooning,” inspired by the life of the artist Willem de Kooning; “Business End of the Blues,” a co-write with Katy Moffatt that's done as a duet with Amos Garrett;  and the poignant “John Doe Mexican,” which could be about so many of the anonymous refugees that have come north over the Rio Grande (and which reminds me of those until-recently nameless deportees that Woody Guthrie wrote about).

Museum of Memories Vol. 2: 1973-2013 is a limited release available only at Tom’s concerts and online at Village Records. You can download the liner notes at this link.

Pictured: “The Upside Down Cowboys,” a Tom Russell painting hanging in my living room, and me and Tom, backstage at Petit Campus in Montreal, November 2012.