CD reviews will start in mid-April

I mentioned in an early post that, in the wake of the Gazette cutting CD reviews, I'd be using this blog to post CD reviews. I'll be getting started on that in mid-April just as soon as I finish all the Sing Out! Magazine reviews that are currently on my plate.
Posted by Mike Regenstreif at 8:22 PM No comments:

Pete Seeger's 90th birthday will be celebrated at a huge hootenanny-style concert at Madison Square Garden in New York City on May 3. I wish I could be there.

The line-up of artists is amazing. I was happy to see a bunch of friends on the list. But I must say there are several performers on the list that I would have forsaken in favour of more appropriate artists like Mike Seeger, Peggy Seeger, Rosalie Sorrels, Ronnie Gilbert, Peter, Paul & Mary, and a bunch of others I could easily think of.
Posted by Mike Regenstreif at 12:33 PM No comments: 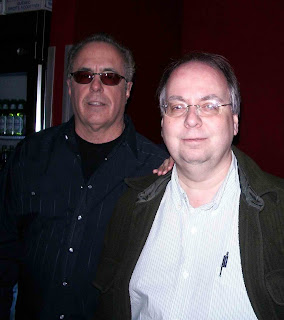 I recently wrote the liner essay for The Tom Russell Anthology: Veteran’s Day, a 2-CD, career-spanning retrospective of the artist I consider to be the finest singer-songwriter of my generation – the generation that started making its mark 10 or 15 years after Dylan.

I’ve been a big fan of Tom’s writing since I started hearing people like Bill Staines, Nanci Griffith and Ian Tyson singing them in the 1970s and early-‘80s. Then I started collecting Tom’s albums – LPs and then CDs – and every one has been among the best, if not the best album of its year. One of them, The Man From God Knows Where, was, in my opinion, the most important folk-rooted album of the past 25 or more years.

I first crossed paths with Tom at a folk festival in the mid-1980s and he proved to be as compelling a live artist as he was a songwriter and recording artist. Since then, I’ve seen Tom perform (God knows how) many times. To me, he’s one of those very rare never-miss artists.

Folks in the Ottawa and Montreal areas have two chances to see Tom next weekend.

On Saturday, March 14, 8:30 pm, he’s at the Black Sheep Inn in Wakefield (near Ottawa). www.theblacksheepinn.com/

Like I said, not to be missed.
Posted by Mike Regenstreif at 5:25 PM No comments:

In Praise of Tom Paxton, Part 1

In Praise of Tom Paxton, Part 1

This was the first of three Folk Roots/Folk Branches features in praise of Tom Paxton.

Many years ago, Tom wrote a series of three beautiful songs that I’ve always loved about a woman named Annie. They’re such vivid songs and the Annie character seemed so real that I once asked Tom about her. Tom’s a friend of mine and I knew how deeply committed he’s always been to Midge, his lovely wife, so I was pretty sure that Annie wasn’t a real person. Tom confirmed that Annie was, indeed, fictional.

A few weeks ago, the Grammy Awards gave Tom a Lifetime Achievement Award for the tremendous body of work that he’s produced over the past 45 or so years. Tom has never been one to rest on his laurels and continues to write great songs. His 2008 album, Comedians and Angels, was also nominated for a Grammy.

http://frfb.blogspot.com/
Posted by Mike Regenstreif at 7:42 PM No comments:

The Montreal Gazette’s CD weekly page of CD reviews was published for the last time this past Saturday (February 28). I’ve been covering roots (country, blues, folk) albums since the page began back in the late-1990s. Before the Gazette decided to combine all its CD reviews in a weekly page, I wrote a CD review column in my specialty area that appeared once every three weeks for several years. My Gazette reviews were frequently republished in many other Canadian newspapers including the National Post, Ottawa Citizen, Winnipeg Free Press, Calgary Herald, Edmonton Journal, Vancouver Sun, Halifax Daily News and Kingston Whig Standard.

Cutting the CD review page was part of the latest round of severe budget cuts taking place throughout the Canwest chain. At least for the time being the Gazette will continue to run its album-of-the-week feature, and I might still contribute to the occasional review to it, but the weekly collection of CD reviews encompassing all genres of music is gone.

That was part of the impetus for setting up this blog. The reviews I would have done in the Gazette will appear here for the time being. And I’ll have a lot more freedom to say what I want to without the tight word and format restrictions I was under there. I’ll have my first CD review up here soon.
Posted by Mike Regenstreif at 4:57 AM 1 comment:

Welcome to Folk Roots/Folk Branches. Folk Roots/Folk Branches was the weekly radio show I hosted on CKUT in Montreal from 1994-2007 on Thursday mornings. The focus of the show was on “music rooted in or branching out from some sort of folk tradition. I gave up the show when I accepted an editor’s job in Ottawa (although my schedule sometimes varies, I’m usually in Montreal on weekends).

Since giving up the full weekly show, I’ve continued Folk Roots/Folk Branches as half-hour feature segments that are heard occasionally on CKUT.

I’ll be using the blog for annotated playlists for the Folk Roots/Folk Branches features and for CD and concert reviews, concert suggestions, news views and miscellaneous commentaries. I’m hoping to post at least once or twice a week, sometimes maybe more. So please check back often and spread the word.

Posted by Mike Regenstreif at 8:28 PM No comments: