Canadian Spaces on CKCU in Ottawa is Canada’s longest-running folk music radio program. It is heard Saturday mornings from 10:00 am until noon (Eastern time). It was hosted for more than 33 years by the late Chopper McKinnon and is now hosted by Chris White and a rotating cast of co-hosts. Today was my first time in the co-host’s chair and I had a ball hosting live radio again for the first time since ending the almost-14 year run of Folk Roots/Folk Branches on CKUT in Montreal in 2007.

Deborah Holland- I Wanna Be a Canadian
Vancouver (Rage On)

The next five songs punctuated our conversation with Bec & Rusty.

Bec & Rusty- A Good Woman’s Love
Live in the studio

The show is now available for online listening at cod.ckcufm.com/programs/129/12561.html.

Sing Me the Songs: Celebrating the Works of Kate McGarrigle 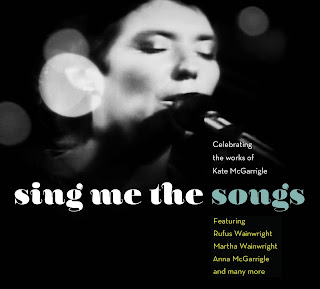 Since my friend Kate McGarrigle passed away in 2010 following a battle with sarcoma, a rare form of cancer, a series of concerts have been held to celebrate her life and works and to raise money for the Kate McGarrigle Fund in support of sarcoma care and research. The concerts have featured Kate’s kids, Rufus Wainwright and Martha Wainwright, Kate’s sister, Anna McGarrigle, other family members, longtime musical friends, peers and younger artists.

Sing Me the Songs: Celebrating the Works of Kate McGarrigle is a 2-CD collection drawing on concerts in 2010 at the Royal Festival Hall in London, 2011 at Town Hall in New York City, and 2012 at Massey Hall in Toronto during the Luminato Festival. Hometown concerts will be held in Montreal at the Outremont Theatre on August 8.

With a few exceptions, these songs were written or co-written by Kate, and many of the performances feature Rufus and/or Martha. Among their highlights is their duet on the soaring “First Born,” a song Kate wrote about Rufus when he was a small child. Rufus particularly shines in versions of “Southern Boys” and Walking Song,” two of my favourite songs from Dancer with Bruised Knees, and in a duet with Antony on the heartbreaking “I Cried for Us.”

Among Martha’s best performances is “Matapedia,” a song inspired by memories of an old boyfriend of Kate’s from when she was a teenager and Martha’s meeting him, many decades later when she was about the same age as Kate was then. She also does a lovely version of “Tell My Sister,” one of several poignant songs of separation Kate wrote during her rocky marriage to Loudon Wainwright III – Rufus and Martha’s father. The song dates from before Martha was born.

Anna, who so rarely sang in public without Kate at her side, is heard on a number of songs including a touching duet with her daughter, Lily Lanken, on “Jacques et Gilles,” Kate’s beautiful song about the French Canadian migration from Quebec to New England to work in the mills and lumber camps. The song was inspired by research Kate was did on the life of Jack Kerouac (Kerouac’s parents were part of that migration) and I’ve long felt it was one of Kate’s most important songs. Other of Anna’s highlights include a collaboration with her children, Sylvan Lanken and Lily, on “On My Way to Town,” one of Kate’s most folk-like songs, and a collaboration on “Heart Like a Wheel,” the first of Anna’s songs to bring her renown, with Emmylou Harris, Krystle Warren, Martha and Lily.

Almost all of the contributions from other artists are extraordinary. Norah Jones sings a beautiful version of “(Talk to Me of) Mendocino,” another of Kate’s very best songs. Justin Vivian Bond, who I’d never heard before, soars on “The Work Song,” Kate’s reminiscence of the songs she and her sisters were taught by their father as little girls,and Emmylou offers her own song, “Darlin’ Kate,” a touching elegy written for Kate after she died. Robert Charlebois, perhaps the most legendary of Quebec singers, teams with Anna for a tender duet on “Dans le silence,” with harmonies from Rufus and Martha.

Martha’s version of “Tell My Sister” mentioned earlier was from one of the New York concerts. A second, equally lovely version sung by Peggy Seeger at the Toronto concert is also included. I was especially happy to see Peggy taking part in the concert because I remember Kate citing Peggy when we talked about who her influences were back in the 1960s.

There are also two very special versions of “Go Leave,” perhaps the most heartbreaking of the songs Kate wrote about her relationship with Loudon: Antony’s, recorded in New York City, and Linda Thompson and Richard Thompson’s recorded in London. Richard and Linda, who were once a brilliant musical duo, had their own storied breakup 30-odd years ago and this may well be the only performance they have given together since.

I always loved hearing Kate and Anna sing traditional folk songs and there’s a beautiful version of “Dink’s Song,” with Anna, Chaim Tannenbaum, Lily, Rufus and Martha each taking a verse. Chaim also leads a rocking version of “Travelling on for Jesus,” the traditional Bahamian gospel song Kate arranged for the finale of the first Kate and Anna LP, and which was often the concert finale back in the 1970s when I worked with them (click here for background on the years I worked with Kate and Anna).

Each of the CDs ends with tracks featuring Kate’s own voice. The first disc finishes with “Proserpina,” the last song Kate wrote. A recording of Kate singing the opening lines of the song fades into a beautiful duet by Sloan Wainwright and her niece, Martha. At the end of the second disc, Kate is heard by herself singing “I Just Want to Make It Last,” in which she asks the powers that be to “make the earth slow down a bit/We’re going way too fast/And I just want to make it last.” As the song ends, the last thing we hear is Kate saying “thank you.”

No, Kate, thank you. 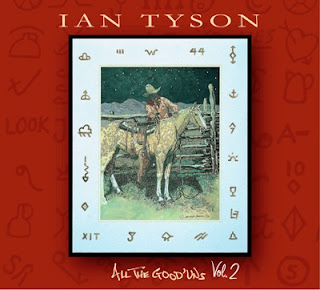 The early Ian & Sylvia albums had a lot to do with getting me into folk music when I first started buying records as a kid in the 1960s. Together with Ian Tyson’s solo work from the 1970s to now, he is responsible for one of the most significant bodies of work bridging folk, country, and western music.

In 1996, Ian put together All the Good’ Uns, a best-of collection of songs drawn from the six albums he’d released since 1983 – albums that revitalized his career and essentially kick-started the revival of cowboy culture in the contemporary world. In my Montreal Gazette review, I gently took Ian to task for the album title. “It would pretty much take a boxed set of all the earlier albums to get ALL the good ‘uns,” I argued.

And that is pretty much the case with All the Good ‘Uns Vol. 2, a collection of 19 great songs drawn from five albums released between 1999 and 2012. But, I guess, choices have to be made in assembling such collections and it’s hard to argue with any of the choices: they are all good ‘uns.

Among the songs included from 1999’s Lost Herd is “La Primera,” a ballad about the
history of horses in the Americas that Ian anthropomorphically tells from the point of
view of one of the first 16 horses brought to the New World in 1493. It’s an ambitious and potentially pretentious concept for a five minute song, but with it Ian proves he is a master of timeless and classic songwriting. A couple of other Lost Herd songs, including the title track and “Brahmas and Mustangs” lament the loss of the old west to modernity.

A three-song segment of then-new material from Live at Longview, a concert recording from 2002, is highlighted by “Bob Fudge,” the story of a disastrous 1882 cattle drive that Ian sings from the perspective of a cowboy who survived it.

Among the four songs included from 2005’s Songs from the Gravel Road are “Land of Shining Mountain,” the lead-off song on the CD, in which he describes the foothills of the Rocky Mountains where he lives and, in the third person, mentions that the only girl he wanted has left and is not coming back, and “This is My Sky,” in which he cynically wonders if anyone mates for life before speculating that perhaps it’s only the Canada goose that does.

Four songs are included from 2008’s Yellowhead to Yellowstone and Other Love Songs and two from 2012’s Raven Singer, the albums he recorded after vocal cord scarring and a virus combined to give Ian what he called his “new voice.” Although his singing was hoarser, grittier and even whispery at times, Ian remained a master at song communication. In the vivid “Yellowhead to Yellowstone,” Ian is again singing anthropomorphically, this time from a wolf'’s perspective, as he describes the territories he travels and in “Charles Goodnight’s Grave,” he sings about the legendary cattle rancher who forged the Goodnight-Loving cattle drive trail.

Ian ends All the Good ‘Uns Vol. 2 with his the only song on the CD he didn't write or co-write, a poignant version of Yip Harburg and Harold Arlen’s classic “Somewhere Over the Rainbow” from Lost Herd that he completely makes his own.

Ian is reporting that recent surgery and therapy have pretty much restored his voice to what it was and he’ll be back on the road this year including a concert with Corb Lund, November 30, at the National Arts Centre here in Ottawa that I’m highly anticipating.