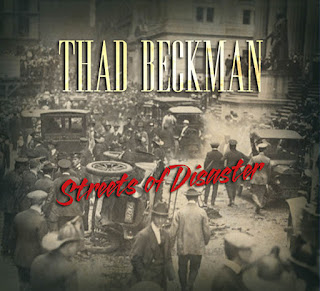 I first became aware of Thad Beckman several years ago when he began working as Tom Russell’s back-up guitarist. Knowing Tom as I do, particularly after 25 years with the great Andrew Hardin as his primary accompanist, there was no doubt in my mind that Thad would be a great guitarist. And he certainly proved that to me when I first saw them play together in 2012. Listening to Thad’s two previously released CDs, Me Talkin’ to Me and Blues Gone By, I also found out that Thad was a good singer-songwriter, and a particularly fine interpreter of traditional blues, in his own right.

As good as the songs were on Me Talkin’ to Me, released on 2008, Streets of Disaster is a giant step forward. Seamlessly working in blues, country and contemporary folk styles, Thad’s songwriting – and his fine performances – now seems classic and timeless.

“Street of Disaster,” the quasi-title track, opens the album. Using a traditional blues mode, the song is a compelling commentary on the state of the contemporary world.

Other highlights include “Blues in My Blood” and “Stirring Up Some Ashes,” a couple of country songs that seems like Merle Haggard at his best; “If Only My Heart Had a Brain,” a look back at romantic history set to a lovely solo guitar arrangement; “200 Dollars,” a witty blues tune in a Mississippi John Hurt mode; and “A Soldier Returns Home,” an extended, impressionistic blues guitar instrumental.

In addition to nine of his own compositions, Thad also includes a slinky version of Richard “Rabbit” Brown’s “James Alley Blues,” one of my all-time favorite blues songs (the original was included on Harry Smith’s legendary Anthology of American Folk Music), in which Thad’s vocals are very effectively complemented by Mike Emerson on organ, Kurtis Piltz on harmonica, and Thad on electric lead guitar; and a terrific live duet with Tom Russell on Tom’s enduring, “Blue Wing.”

The folk music community in Ottawa, in Ontario, and, indeed, across Canada, was dealt a harsh blow today with the announcement that the Ottawa Folklore Centre has fallen into bankruptcy and has closed.

The announcement came in a letter to the community (see below) from Arthur McGregor, who founded the Ottawa Folklore Centre in 1976 and ran it with tremendous dedication and love for nearly four decades – most of his adult life. As Arthur writes in his letter, it has been his life’s work.

The Ottawa Folklore Centre was never just a musical instrument store. It was also a music school where skilled musicians taught novices how to sing and play guitar, banjo, ukulele, mandolin, fiddle and who knows what else. It published songbooks by the likes of Stan Rogers and Bruce Cockburn and it was a community gathering point. The Ottawa Folklore Centre was a place to drop in and hang out. It was a great source of information about what was happening on the folk scene. The Ottawa Folklore Centre was a beloved community institution that nurtured and supported other community institutions – from the Ottawa Folk Festival to Canadian Spaces on CKCU to the Canadian Folk Music Awards, Rasputin’s Folk Café, Irene’s, the Black Sheep Inn, the Ottawa Grassroots Festival, and virtually every other festival, concert venue and music producer in the region.

But, noting all of that, and so many other incredible accomplishments, doesn’t begin to address the real, lasting contribution of the Ottawa Folklore Centre – which was to make folk music an accessible, affordable, participatory part of people’s lives.

Thirty-eight years! It’s been a great run, Arthur. The entire folk music community is giving you a well-deserved standing ovation for all that you’ve done and accomplished with the Ottawa Folklore Centre.

There are few things more important to me than folk music and the deep community that it engenders. I have dedicated most of my life to this community.  For the past 38 years the main symbol of that dedication has been the Ottawa Folklore Centre. I opened it on Bronson Avenue in 1976 and later, Terry Penner, my late wife, and I moved it to its present location on Bank Street. These thirty-eight years have not been easy but I have continued, with the help of family and friends…hundreds, in the face of many challenges and been proud of what we have accomplished. I have persisted in upholding the original vision of the OFC as a true centre for musicians to come together as well as a centre for teaching. The pursuit of this vision has meant much personal sacrifice over the years and the road has been far from easy. But it has been my life’s work and I am particularly proud of the esteem the community has held for this work and this vision.  That esteem was gloriously on display when it first became known that the business was running into trouble last year. A benefit concert was held which raised enough money to keep us afloat for a while.  This outpouring of love was humbling and heart-warming at the same time.  It is because of this love and community support that the decisions I now have to make are so onerous and difficult.

In recent years the challenge of keeping the OFC alive has been steadily increasing to the point where the impact on my personal life is no longer bearable.  It has become quite clear that in spite of our on-going efforts and personal sacrifices, this business is simply not sustainable.

We have sought much professional advice and explored several options. I have pursued possible buyers of the business, real estate agents to see if sub-leasing parts of the building is feasible, hired consultants to help organize the business to reflect current realities. We have worked with community organizations to share programming. I have tried everything I know to keep this business afloat. I have invested all the money that I have available to me. I have nothing left to give, monetarily or physically.

With sales recently weakening as the summer arrives, the final decision has been made for me.

Effective July 23, the Ottawa Folklore Centre Ltd. is declaring bankruptcy and will be in the hands of a bankruptcy trustee, Ginsberg/Gingras. There will be customers, students, staff, suppliers, and teachers who will not understand this choice and who will lose earned income and payments for lessons and goods that The Folklore Centre will not be able to honour. I apologize for this. It is not for lack of trying.

Jane Voss & Hoyle Osborne – Never No More Blues; Get to the Heart; Pullin’ Through 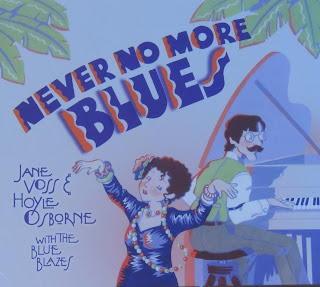 Jane Voss & Hoyle Osborne, who have been making great music together for 35 or so years have just released a fabulous new album, Never No More Blues, and have also recently reissued two of their earliest LPs, Get to the Heart and Pullin’ Through, which I don’t believe have ever been on CD before.

Never No More Blues is an absolutely sublime set of songs and tunes dating from the early days of classic blues, jazz, ragtime and country music – many of them showing the extent to which musical styles and influences were already blending in the early decades of the last century.

With 17 tracks stretching more than 77 minutes, it’s a very full set with nary a wasted moment. Jane is a great blues singer and does wonderful interpretations of such tunes as Ma Rainey’s “Farewell Daddy Blues,” Alberta Hunter’s “Downhearted Blues” and a version of “Blues (My Naughty Sweetie Gives to Me),” based on a 1919 version by Esther Walker, a slower, very different version than the one popularized in the ‘60s by Jim Kweskin & the Jug Band.

Some of my favorites in the set include Elizabeth Cotten’s “(That’s Why) I’m Going Away,” which Jane sings with a gentle country lilt; Jimmie Rodger’s “Drunken Bar Room Blues,” in which the blues and early country music collide (I’ve always heard this song as a relative of “St. James Infirmary”); “Cheer Up! Smile! Nertz!” a Depression-era song that lampooned the efforts of popular culture of the day to get people’s minds off their troubles; and “Leaving Home,” a version of “Frankie and Johnny” recorded by Charlie Poole in 1926.

Jane (lead vocals and guitar) and Hoyle (piano, vocals and guitar) are joined throughout the album by The Blue Blazes, a stellar group that includes fiddler Suzy Thompson, guitarists Eric Thompson and Tony Marcus, both of whom also play mandolin and banjo, and bassist Stuart Brotman, who also plays tuba.

The Blue Blazes are heard to great effect on three terrific instrumentals built around Hoyle’s formidable skills playing ragtime and jazz piano. “St. Louis Tickle,” adapted for the guitar by Dave Van Ronk, is returned to pianistic roots. “Ape Man,” written by pianist Jimmy Blythe is guaranteed to put a smile on your face, while the extended version of William H. Tyers’ 1911 composition, “Panama (A Characteristic Novelty),” is sweet and lovely. 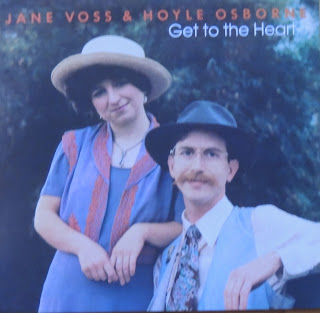 Jane and Hoyle’s first album as a duo, Get to the Heart, originally released back in 1981, was one of my favorite LPs of the day. The album opens with Jane’s, “Gateway Blues (Blues for Bessie), an infectious and unforgettable tribute to Bessie Smith, and continues with a mix of original and borrowed tunes including Hoyle’s “Salamander Shuffle,” a wonderful piano instrumental; Jane’s title track, which explains all the right reasons for singing and playing music; and Larry Clinton’s “The Devil with the Devil,” a swinging, personal declaration of independence.

Their second album, Pullin’ Through from 1983, includes more of the (equally great) same with a mix of old tunes like Memphis Minnie’s “In My Girlish Days” and “I’m Pulling Through,” a jazz ballad recorded by Billie Holiday, with in-the-tradition originals like Jane’s “Good-for-Nothin’ Blues” and “I’ve Been on the Road Too Long.” 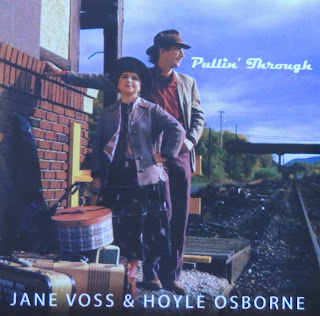 Pullin’ Through also includes several great songs dating from the 1970s folk scene. These include Malvina Reynolds’ “On the Rim of the World,” a sad, compelling portrait of a homeless young girl; Tommy Thompson’s “Hot Buttered Rum,” a dreary-but-lovely love song set in the dead of winter; and Bob Bossin’s “Show Us the Length,” a hilarious response to high school beauty pageant culture. The latter is one of two bonus tracks on the CD reissue that were originally released on a 45-rpm single in 1983.

I will indulge myself with a personal reminisce of one of those songs. In 1973, I produced a double-bill concert at Dawson College in Montreal with Malvina and Bruce “Utah” Phillips. Before the concert, Malvina asked me for some tape so she could tape the lyrics to a new song she’d written that day to the mic stand. So I produced the world premiere performance of “On the Rim of the World.”