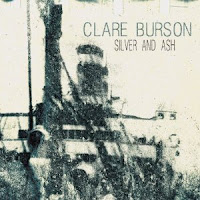 (This review is from the November 29, 2010 issue of the Ottawa Jewish Bulletin.)

Clare Burson addresses her grandmother in “The Only Way,” the first of 10 original songs on Silver and Ash. “Someone said you left there just in time,” she sings. It was, quite literally, just in time when Burson’s grandmother escaped Nazi Germany for the United States on the morning of Kristallnacht in 1938.

With a grant from Six Points Fellowship, an organization that supports artists exploring Jewish themes in their work, the New York-based singer-songwriter wrote these folk-like songs by imagining her grandmother’s life in Germany during the trying years preceding the Holocaust.

Most of the songs are impressionistic with few explicit references. It’s almost like each song offers an interpretation of a faded photograph (in fact, there are several faded photos included in the CD booklet). Images of a small baby pervade one song while another offers sketches of people in – seemingly sudden – transit. In “Everything’s Gone,” Burson remembers her great-grandparents – soon to be lost in the Holocaust – through the eyes of her grandmother about to “take the last train from the last train station.”

Steel Rail concerts have been too few and too far between in the years since guitarist and songwriter Dave Clarke left Montreal for the milder climes of Victoria, BC. Soon, though, Dave will be back in Steel Rail action with bass player and singer Ellen Shizgal and singer-guitarist Todd Gorr for concerts in Lennoxville and Montreal. They’re promising some new songs and lots of the old favourites in their patented folk-meets-bluegrass style.

The concerts are both double bills with the most excellent duo of Bill Garrett & Sue Lothrop.

Here are my Montreal Gazette reviews of the most recent CDs by Steel Rail and Bill Garrett & Sue Lothrop.

This third album by Steel Rail, rooted almost equally in country, bluegrass and folk music, is their best effort yet. The trio’s ensemble sound features vocalist and rhythm guitarist Tod Gorr, who has one of the most naturally country voices this side of George Jones, lead guitarist Dave Clarke, one of the most fluid acoustic pickers in the country, and bassist Ellen Shizgal, who provides the band’s heartbeat, some gorgeous harmonies and two lead vocals. Steel Rail’s secret weapon, though, is the fine craftsmanship of their songwriting. Songs of love and loss mix with pieces that nostalgically recall Belmont Park or that conjure images of the sailor’s church in Old Montreal, the Quebec countryside, beautiful prairie skies and the tough streets of downtown Winnipeg. ****

On their duo debut, veteran Montreal singer-guitarists Bill Garrett and Sue Lothrop have crafted a fine blend of country, Cajun and folk-rooted material. One of the most affecting songs is the beautiful title track written about Lothrop’s mother at the end of her life. Another is "That’s How the Summer Slips Away," a poetic and wistful piece written by Lucinda Chodan and Dave Clarke. Two topical songs, Shelley Posen’s "No More Fish," and Terry Tufts’s "Never No More," provide moving commentary on contemporary issues, while "Leaving Louisiana," Rodney Crowell’s Cajun stomper, is the album’s most exciting tune. Garrett and Lothrop share the lead and harmony vocals and are well served by a supporting cast that includes Clarke and Tufts, fiddler Don Reed and clarinetist Vern Dorge. ****

The Ottawa Citizen has a front page story today reporting that the Ottawa Folk Festival has been bailed out and taken over by the Ottawa Bluesfest.

Reading the article, I surmise that the folk festival will likely move from Britannia Park and have more commercially viable headliners. It remains to be seen what that means for the rest of the artistic direction, artistic legacy and traditions of the festival (or the staffing and volunteer continuity). I guess we'll see in the coming months. 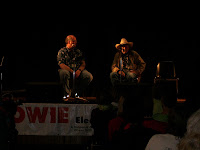 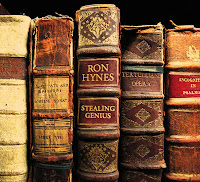 Ron Hynes, the pride of St. John’s, Newfoundland and Labrador, is, without question, one of Canada’s greatest singer-songwriters – a writer whose genius can be found in decades worth of great songs.

Ron calls his new album Stealing Genius because most of its songs are inspired by specific works written by several poets and novelists, mostly from Newfoundland along with one American. In some songs, Ron actually gives the inspiring writer a co-writing credit.

The album opens with “Blood and Bones,” a song inspired by What They Wanted, a novel about a family’s resettlement by Donna Morrissey. It’s a familiar story that Ron sings about: a family forced to leave their home for someplace new because the work is no longer there. In this case, presumably, it’s the local fishery that’s no longer viable as “the ocean died like late night embers in the stove.” Ron’s lyrics and his singing seem to combine poignancy with regret and a hint of anger.

Morrissey’s book, as well as Michael Crummy’s The Wreckage, inspired “My Father’s Ghost,” a song that is both a remembrance from long ago of discovering a father’s death and a brilliantly drawn contemporary portrait of a lonely life in sea coast village.

In “House,” inspired by Stan Dragland’s Stormy Weather: Foursomes, Ron sings about an old house as the shell for the lost love that no longer lives within its walls.

“I Love You More Than God” and “Love and Hunger” are two stunning love songs based on poems by Des Walsh and which are reminiscent of the great romantic poets.

One of my favourite songs in the set is "30 For 60," inspired by a poem by Al Pittman, that's a powerful portrait of a man, no longer young, damning his regrets.

One song that takes its inspiration from an American book is “Judgement,” a song based on Ron Hansen’s The Assassination of Jesse James By The Coward Robert Ford. Ron sings from the perspective of Ford trying to rationalize his act.

As a singer, Ron knows exactly how to communicate the essence of the songs to his listeners and the arrangements, featuring such musicians as Paul Mills (who also produced the album), Alec Fraser, Tom Leighton and Burke Carroll, frame the songs almost perfectly.

Stealing Genius represents the finest set of original songwriting to be released in Canada this year. 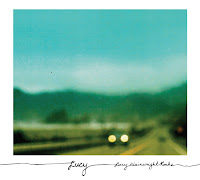 Being the daughter, niece, and half-sister of a bunch of accomplished singer-songwriters, Lucy Wainwright Roche probably had a lot to prove when she decided to give up her teaching career and go into the family business. After all, her parents are Suzzy Roche of the Roches and Loudon Wainwright III. Her aunts are Maggie and Terre Roche, also of the Roches, and Sloan Wainwright, and her half-siblings are Rufus and Martha Wainwright. That’s an awful lot of familial talent to live up to. Well, first on a couple of eight-song EPs, and now on Lucy, her first full-length release, Lucy has more than proven herself worthy of a seat at a Wainwright and/or Roche family round-robin session.

Although her songs have their own distinctiveness, Lucy reminds me more of her mother’s music than her father’s. The melodies, the sometimes quirky lyrics, the way she harmonizes – sometimes with herself, or with back-up vocalists like her father, or the Roches, or the Indigo Girls, or Girlyman – have a similar kind of appeal to the Roches. Take “Once In,” the lead-off song, for example. The lines seem to be disjointed, but they come together as images of time on the road leading back to home. The travelling life, represented by the blurry, lonely, highway scene depicted on the CD cover, is a recurring theme in many of Lucy’s songs.

My favourite songs in the set include “Accident and Emergency,” an observational piece about a night spent in a British hospital’s emergency room, and “Statesville,” which uses images of a torn down high school in that North Carolina town, and the hanging of Tom Dula – immortalized in the folksong “Tom Dooley,” which happened in Statesville in 1868 – as metaphors for a broken relationship.

After 10 of her own songs, Lucy ends the album with a pair of interesting covers. With Paul Simon’s “America,” featuring the patented Roches harmonies, Lucy beautifully captures the same kind of innocence, alienation and anomie that Simon and Garfunkel brought to their recording more 40 years ago. Then, with Elliot Smith’s “Say Yes,” Lucy and duet partner Ira Glass, express the seemingly contradictory thoughts of someone who’s broken up, but apparently still linked in love, with his ex-girlfriend. 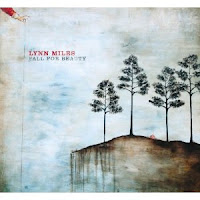 As I’ve said before, Ottawa’s Lynn Miles has long been one of my favourite confessional singer-songwriters. This past August, Lynn was one of several artists I hosted in a round-robin set at the Ottawa Folk Festival and I got to preview several of the10 new songs she’s recorded on Fall for Beauty, a collection that ranks with her best work.

It’s often been said that the definition of a good country song is “three chords and the truth,” and that’s something that Lynn, as a veteran singer-songwriter knows well. In her country-flavoured song of that name, Lynn lets us know that three chords and the truth is still what she is looking for as an artistic statement and, indeed, these songs hit that mark time and again in various shades and combinations of contemporary folk, country and mature pop music.

The most powerful song in the collection is also – in terms of the production – the quietest. “Love Doesn’t Hurt,” is an astute, analytical piece about domestic or relationship abuse that draws definitive lines in the sand about what needs to be recognized as unacceptable in a relationship. I think Lynn was right to leave this track to just voice and guitar – nothing else was needed.

Also quite powerful is “Little Bird,” a song she sings compassionately and with understanding to someone who seems to battling with personal demons.

Another highlight is “Fearless Heart,” a wish list song set to a bright, up tempo arrangement and hooky melody that sets out a whole bunch simple desires and one big one, a fearless heart. She shows us that fearless heart in the following song, “I Will,” in which she declares her determination not to be laid low by the kind of setbacks that life throws in our path.

The album ends with the optimistic “Time to Let the Sun,” a sweeping, string-laden piece that recalls era when the likes of Yip Harburg, Harold Arlen and George and Ira Gershwin were creating the Great American Songbook.