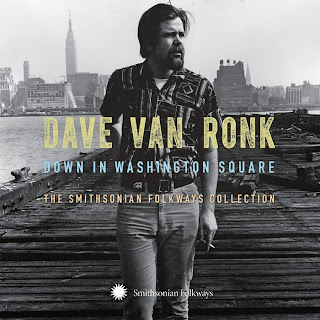 “Van Ronk could howl and whisper, turn blues into ballads and ballads into blues. I loved his style. He was what the city was all about. In Greenwich Village, Van Ronk was king of the street, he reigned supreme,” wrote Bob Dylan in his memoir, Chronicles: Volume One.


The late, great Dave Van Ronk (1936-2002) was one of my teachers. I never took a guitar lesson from him but I learned a lot from him about the history of music – about Bessie Smith, Jelly Roll Morton, Furry Lewis, Bertolt Brecht and many other seminal figures, and about a Greenwich Village scene that was happening about a dozen years or so before I first got there.

I first met Dave sometime around 1970 when he played at the short-lived Back Door Coffee House in Montreal. He was more than gracious in chatting with the teenaged me and in answering any and all the questions that this fascinated kid could throw at him. He also pointed me in some interesting directions in music to listen to.

A few years later, an actual friendship developed when we’d meet regularly at folk festivals, on trips that I took to New York City in the mid-‘70s to early-‘80s, and on his trips to Montreal to play at the Golem, the Montreal folk club I ran in the ‘70s and ‘80s.

I spent a few late nights sitting on Dave’s couch in New York, and a few more when he sat on my couch in Montreal, as we listened to music, talked about music and occasionally argued about politics.


More than the history of music, Dave taught me how to listen to music – I mean really listen to 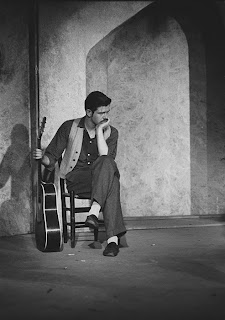 music. How to give the music I was listening to the attention it deserved. I remember one night in the 1980s when he was staying with me during a visit to Montreal to play at the Golem, he made me listen to a Lester Young solo on an LP that I had over and over again until I fully understood and appreciated some point Dave wanted me to understand about the solo.

Dave’s last visit to Montreal was in 1998 to play the Montreal International Jazz Festival and we used that visit as an opportunity to sit down and do an extensive interview for the Folk Roots/Folk Branches radio program. I was very proud to see that interview credited as one of the sources Elijah Wald drew on when he completed The Mayor of MacDougal Street, Dave’s posthumously published memoir. The new Coen Brothers film, Inside Llewyn Davis, which comes out in December, is a fictional story inspired by the book.

And, of course, I also learned so much watching Dave perform and from listening to his recordings. I still go back and listen often to the recordings from across his career. The new 3-CD collection, Down in Washington Square: The Smithsonian Folkways Collection, includes all of the tracks from Dave’s Folkways albums from 1959 and 1961 as well as other rarities and unreleased recordings from that period, and before, and from other periods, including his full set from a 1997 Wolf Trap concert honoring the reissue of Harry Smith’s Anthology of American Folk Music, and some final studio recordings made shortly before he died while undergoing treatment for colon cancer.

Most of the first two discs are devoted to the songs that Dave recorded for Folkways back in the day – for his first two solo LPs, Dave Van Ronk Sings Ballads, Blues & a Spiritual (1959) and Dave Van Ronk Sings (1961), and three sea shanties he sang lead on as part of the Foc’sle Singers, a group organized by Paul Clayton to record Foc’sle Songs and Shanties (1959). 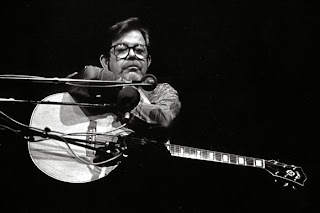 Although, Dave himself professed not to like the song, I still enjoy hearing Dave’s original composition, “River Come Down,” which became known as “Bamboo” on Peter, Paul and Mary’s first LP, and he acquits himself most credibly as an a cappella shanty man on “Haul On the Bowline,” “Santy Ano” and “Leave Her Johnny.”

Among the previously unreleased tracks on the second CD are concert versions of “Mean Old Frisco (1961), “Stackalee (1961), “Ain’t No Grave Can Hold My Body Down (1958)” and Dave’s impressive arrangement of “House of the Rising Sun (1961),” an arrangement Dylan lifted and famously recorded on his first LP before Dave had had a chance to record it himself.

Most of the third CD is devoted to previously unreleased or rare live recordings from the 1950s, ‘60s, ‘80s and ‘90s. Some of the earlier material, like the blues standard “Trouble in Mind (1958),” Reverend Gary Davis’ “Oh Lord, Search My Heart (1958)” and his beautiful interpretation of Billie Holiday’s “God Bless the Child (1963)” show a depth of arrangement at a young age that few artists ever achieve (and Dave’s depth of arrangement continued to deepen over the course of his career).

While Dave was never a prolific songwriter, he was a great one, and there are versions of some of my favorite Van Ronk originals including “Losers (1988),” a clever spoof of all who take themselves too seriously, and “Another Time and Place (1982),” one of the most beautiful love songs I’ve ever heard. I remember being stunned by it at the Golem – probably also sometime in 1982 – when Dave introduced it as a brand new song.

The third CD also includes the marvelous four-song set Dave performed in 1997 at the Wolf Trap concert honoring the reissue of the Anthology of American Folk Music. Compare those 1997 versions of “Spike Driver’s Blues” and “St. James Infirmary (Gambler’s Blues)” to the ones from almost four decades earlier to to see what I mean about the continuous deepening of his arrangements over the years.

And it’s a real treat to hear the final five songs in the set – previously unreleased solo studio tracks he recorded in 2001, just months before he passed away: “Ace in the Hole,” which he’d recorded in the early-‘60s with the Red Onion Jazz Band;” the blues standard “Going Down Slow”; “Jelly Jelly” and “Sometime (Whatcha Gonna Do),” which he drew from the singing of Josh White; and an exquisitely beautiful version Dylan’s “Buckets of Rain.”

Along with annotated song information, the album booklet includes a lovely introduction by Andrea 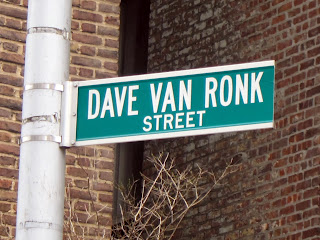 Vuocolo, Dave’s widow, and an essay by Jeff Place of Smithsonian Folkways, who compiled the set.

Although about two-thirds of the 54 tracks in this collection were already on my shelves, the fact that they’ve never sounded as good as they do here plus all the magnificent tracks that were previously unreleased, add up to making Down in Washington Square, one of the most essential releases of the year.

It’s been more than a decade now since Dave passed away and he’s missed greatly. I’m honored to say “he was a friend of mine.”

CKCU can be heard at 93.1 FM in Ottawa and ckcufm.com on the web.

This week’s show was co-hosted by Mike Regenstreif and Pat Moore.

Canadian Spaces on CKCU in Ottawa is Canada’s longest-running folk music radio program. It is heard Saturday mornings from 10:00 am until noon (Eastern time). It was hosted for more than 33 years by the late Chopper McKinnon and is now hosted by Chris White and a rotating cast of co-hosts. Today was my fourth time in the co-host’s chair and Pat Moore was sitting in for Chris White.

Norah Jones w/Martha Wainwright & Rufus Wainwright- (Talk to Me of) Mendocino
Sing Me the Songs: Celebrating the Works of Kate McGarrigle (Nonesuch)

The next three songs punctuated Pat’s conversation with Paul Langille and Paul Sims.

The next four songs punctuated my conversation with Kevin Head.

The show is now available for online listening. cod.ckcufm.com/programs/129/14032.html

Posted by Mike Regenstreif at 2:27 PM No comments: