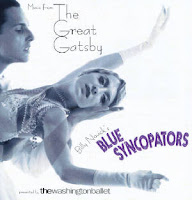 
Clarinet and sax player Billy Novick has been one of my favourite musicians since I first heard him playing with David Bromberg in the mid-1970s. A few years later, I got to know him and to hear him a lot when the small booking agency I operated for several years in the late-‘70s represented Billy’s duo with master finger-style guitarist Guy Van Duser. Thirty years later, as evidenced on this CD, Billy is still making exceptional music.

Billy was commissioned by the Washington Ballet to provide the score for their production, earlier this year, of The Great Gatsby, a ballet based on the classic novel of the 1920s by F. Scott Fitzgerald. Not having seen the ballet, I can say, without reservation, that the CD stands on its own as a great set of 1920s-era jazz, blues and ragtime that includes a bunch of period classics and some great in-the-tradition pieces composed by Billy.

Also delightful is the work of vocalists Louise Grasmere and Dane Vannater on several numbers. Whether it’s Grasmere’s humorous scatting on Billy’s “Dance of the Ashes” or sounding like a classic blues singer on “He May Be Your Man,” or Vannater singing poignantly on Irving Berlin’s “What’ll I Do,” or camping it up on “We Are All Going Calling on the Kaiser,” their singing is in the same league as the instrumentalists. 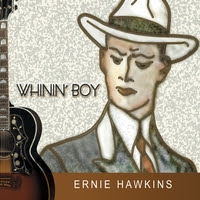 Speaking of New Orleans Dixieland mode, Whinin’ Boy, the latest CD by Ernie Hawkins, who is primarily known for his Piedmont-style guitar playing, – he was a student of Reverend Gary Davis and remains one of the Rev’s greatest interpreters – blends Piedmont guitar playing with Dixieland arrangements featuring an equally fine set of musicians.

The album opens with Ernie’s guitar playing Jelly Roll Morton’s title track in an arrangement that, early on, is reminiscent of Dave Van Ronk’s great Morton interpretations. By the time he starts singing the first verse, the washboard is beefing up the rhythm, and by the time he gets to the second verse, the horns are sounding like Saturday night at Preservation Hall. (The album ends with an instrumental reprise of “Whinin’ Boy.”)

Whether doing faithful versions of New Orleans standards like “Basin Street Blues,” or adapting Davis’ “There is a Table in Heaven” to a Dixieland arrangement or vamping on Big Bill Broonzy’s “Shuffle Rag,” Ernie makes this music come alive.

Mixed in with the classic blues and jazz tunes are a couple of Ernie’s original instrumentals. On “The Southbound Sneak,” he matches his great blues fingerpicking to a great tuba-trombone-washboard accompaniment. Then, on “My Poodle Has Fleas,” a tune he’s recorded before, he switches to ukulele to trade licks with tuba player Roger Daly.

Both of these CDs are a reminder of how infectious Dixieland music can still be in the hands of creative and inventive musicians and arrangers.