Mavis Staples -- You Are Not Alone 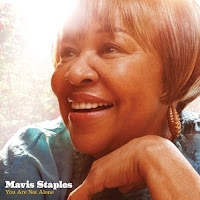 MAVIS STAPLES
You Are Not Alone
Anti-
mavisstaples.com

Now over 70, and 60 years after she started singing with her family band, the Staple Singers, Mavis Staples remains a tour-de-force of gospel music (and blues, too.)

Her last couple of albums, We’ll Never Turn Back and Live: Hope at the Hideout, revisited the civil rights era that the Staples Singers provided much of the soundtrack to and she showed how vital and contemporary those songs remain. On You Are Not Alone, she breathes new life into some of the traditional and Pops Staples-composed spirituals that she was singing with the Staples Singers, mixing them with some equally formidable contemporary songs suggested by producer Jeff Tweedy (of Wilco).

Among the gospel highlights are an infectious revival tent version of Reverend Gary Davis’ “I Belong to the Band,” that could get anyone up out of their seats, an a cappella rendition of “Wonderful Saviour,” that has Mavis leading the harmony singers in call-and-response, and an arrangement of “In Christ There Is No East or West” built around Mavis’ lead vocals and Tweedy’s acoustic guitar playing. Speaking as a non-Christian, I can say one needn’t be a believer to believe in the power of Mavis’ singing or to appreciate the honest conviction that seems to be evident in every word she sings.

Highlights among the more contemporary songs include a powerful version of John Fogerty’s “Wrote a Song for Everyone,” a compassionate take on Tweedy’s “You Are Not Alone,” and slow, blues ballad rendition of Randy Newman’s “Losing You.”

There’s a whole of soul on this CD.