Sweet Honey in the Rock – A Tribute, Live! Jazz at Lincoln Centre 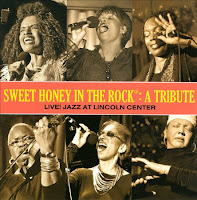 I well remember the first time I saw Sweet Honey in the Rock at the Mariposa Folk Festival, circa 1974. It was an electrifying performance of powerful songs made even more powerful by the stunning a cappella vocals of the group of African American women singers then led by the great Bernice Johnson Reagon who had been one of the Freedom Singers in the 1960s.

Over the years, I’ve seen them perform numerous other times and followed their recordings and evolution as various group members have come and gone over an almost four decade period. One folk festival performance I particularly remember – it was at either the Winnipeg or Vancouver Folk Festival sometime in the 1980s – because I was watching it from the backstage viewing area in the company of my friend Odetta, the legendary and highly influential folksinger. Odetta was exuding an infectious joyousness as she listened to them. Near the end of the set, they called her out on stage with them. Hearing Odetta sing with Sweet Honey in the Rock was nothing short of incredible.

I produced a bunch of concerts for Odetta in Montreal in the 1980s and something she always did at those concerts was what she called “honoring the ancestors.” By ancestors she meant the singers and songmakers who came before her such as Lead Belly, Paul Robeson, Josh White and many others. She did this by singing their songs, or songs associated with them, in her own distinctive way and letting us know that she, like the ancestors, like those who followed, and those of us listening and singing along, were all links in an ongoing chain.

A Tribute: Live! Jazz at Lincoln Center, a 2-CD set documenting two special concerts recorded in New York City in April 2011, is a different kind of Sweet Honey in the Rock album.

For one, it was a tribute concert honoring four of Sweet Honey’s “ancestors”: Miriam Makeba, the great South African singer; Nina Simone, who defied all categories blending jazz, soul, blues, folk and popular music in her distinctive style; Abbey Lincoln, the great jazz singer and songwriter; and, of course, Odetta.

For another, for the first time (so far as I know) Sweet Honey was accompanied on most of the selections by a terrific jazz trio of pianist Stacey Wade, bassist Parker McAllister and drummer Jovol Bell. The three musicians and the five singers of Sweet Honey in the Rock – Ysaye Maria Barnwell, Nitanju Bolade Casel, Aisha Kahill, Carol Maillard and Louise Robinson – blend wonderfully. They sound like they’ve been working together for years.

Most of the songs chosen for the concert were drawn from the repertoires of the four honorees and Sweet Honey’s interpretations both honor the versions of the ancestors and bring something new and distinctive. I’ve absolutely no doubt that all four – each of whom passed away sometime in the past decade – would have been very proud.

But even before introducing songs drawn from the repertoires of the honorees, Sweet Honey opened the concert in their traditional a cappella style with the very beautiful “Breaths,” a Sweet Honey classic they’ve been performing for three decades. The song itself honors the concept of ancestors and as this performance ends the names of several great musical ancestors – including Miriam Makeba, Nina Simone, Abbey Lincoln and Odetta – are recited.

Among the many highlights on this album are amazing versions of “The Midnight Special,” a Lead Belly song that was one of Odetta’s signature pieces, the always infectious “Pata Pata,” Miriam Makeba’s big hit, a jazzy rendition of “Trouble in Mind,” performed by Sweet Honey’s Louise Robinson with the jazz trio, and a haunting interpretation of “Another Man Done Gone,” with both stunning vocals and violin playing by Ysaye Maria Barnwell.

As great as it is to hear Sweet Honey with the band, my very favorite piece on the album is performed a cappella. “Freedom Suite,” is an Odetta-style medley encompassing “Oh Freedom,” “Come and Go with Me to that Land,” I’m On My Way to Freedom Land” and “Glory, Glory Hallelujah.” The four songs are a great reminder of why Odetta was known as “the voice of the Civil Rights Movement.”

In its entirety, A Tribute is a beautiful and very powerful blending of various folk, jazz, blues and African musical styles.

Tam was the driving force behind the Fiddler’s Green folk club in Toronto, the focal point for traditional folk music, and also traditionally-oriented singer-songwriters, in Toronto. He was also the leader (as if there ever could be one) of the Friends of Fiddler’s Green, the club’s house band of singers and musicians – all of whom but Grit Laskin were British Isles ex-pats – who were fixtures at folk festivals and folk clubs in other cities, including at the Golem, the club that I ran in Montreal. Almost every trip I took to Toronto in those years included an evening at Fiddler’s Green.

Ian Robb, a member of the Friends of Fiddler’s Green, wrote an excellent obituary about Tam for Sing Out, which can be seen at this link.

Chopper is one of those guys on the Canadian folk scene that I knew seemingly forever. I’m not exactly sure when we first met, but I have memories of hanging out with him at folk festivals, at the Toronto Folklore Centre where he worked for several years, and of his showing up at the Golem on a few occasions in the 1970s, and on more than a few occasions in the ‘80s.

Chopper was the personification of the folk music scene in Ottawa. He organized and hosted concerts, worked at the Ottawa Folklore Centre for many years, did some artist management, edited some songbooks, including Songs from Fogarty’s Cove by Stan Rogers, but, most notably, he was the host – for 33 years! – of Canadian Spaces, Canada’s longest-running folk radio program.

The folk music scene in Ottawa over the past three decades-plus revolved around Canadian Spaces. In fact, Chris White, the founding artistic director of the Ottawa Folk Festival, said the festival was launched in response to the popularity of the radio show. Chopper, of course, was a familiar figure as a main-stage MC at the Ottawa Folk Festival for many years.

Yesterday morning, Chris White, Lynn Miles and Ian Tamblyn hosted a poignant, moving tribute to Chopper on Canadian Spaces on CKCU. Their memories and by several studio and telephone guests were lovely and some of the songs that were sung were so perfectly heartbreaking. You can stream the program at this link.

Update March 23: A second excellent tribute to Chopper was hosted by Chris White and Matthew Crosier on today's edition of Canadian Spaces on CKCU. A multitude of studio and telephone guests including, among others, Tannis Slimmon, Garnet Rogers, Ann Downey, Laura Smith, Terry Eagen, Karen Flanagan-McCarthy, Gene Swimmer, Joyce McPhee, Ferron and myself shared memories of Chopper. I was greatly honoured to be asked to be part of the program. You can stream the program at this link.

Both Tam Kearney and Chopper McKinnon were builders of the Canadian folk music community. Both will be remembered for many years to come. 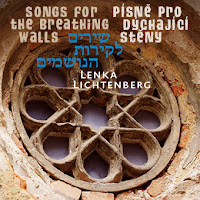 (This review is from the March 18, 2013 issue of the Ottawa Jewish Bulletin.)

In 2009, Lenka Lichtenberg, a Toronto-based singer and composer and daughter of a Holocaust survivor who grew up in Prague before coming to Canada as a young adult, performed concerts at two synagogues in the Czech Republic. Reflecting on the experience she decided to record an album of settings of Jewish liturgical material at 12 different synagogues – some of them restored as synagogues or museums of Jewish life, some of them derelict – throughout the Czech and Moravian areas whose Jewish populations were decimated by the Holocaust.

The result is the deeply moving Songs for the Breathing Walls – the “breathing walls” being the synagogues themselves still retaining something of the thousands of Jews who prayed there over the generations. As a result of the differing acoustics of the various synagogues, and the individualized settings and arrangements created for each piece, all of the tracks are unique unto themselves, but simultaneously part of the whole.

While the spirituality of every selection can be felt, perhaps the most moving piece is the version of “El Maley Rachamim” recorded in what was a hidden synagogue in the Theresienstadt concentration camp where Lichtenberg’s mother and grandmother spent much of the Second World War.

The CD package comes with a beautiful booklet with photos of the synagogues and notes about their history, as well as information about each of the selections. The album is a very special achievement.

For her work on Songs for the Breathing Walls, Lichtenberg was honoured as traditional singer of the year at the Canadian Folk Music Awards in November.

Sandy Cash – Voices from the Other Side 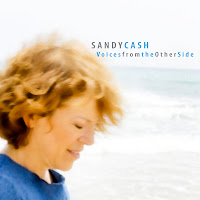 Voices from the Other Side
Sandy Cash
sandycash.com


Singer and songwriter Sandy Cash has an interesting back story. In the 1980s, the Detroit-born artist was a Jewish Studies major at Yale University who thought she might become a Conservative or Reform rabbi. However, she embraced Orthodoxy, gave up her rabbinical ambitions, and moved to Israel where she married, started a family, and pursued a career in musical theatre and, eventually, as a folksinger.

The 11 songs on Voices from the Other Side range from the poignant to the hilarious and include several commentaries on contemporary Israeli realities. “Song of Zion” is a response to those who would delegitimize the State of Israel while “Freeze Frame Truth” captures a moment at a West Bank checkpoint through the eyes of both a 19-year-old Israeli soldier who would much rather be travelling or starting university than searching a Palestinian woman’s car for explosives, and the Palestinian woman herself who is subjected to the search. Cash portrays both sympathetically while, at the same time, recalling the suicide terrorist attacks which led to the establishment of such checkpoints.

One of the more poignant songs is “Gilad’s Guitar,” an adaptation of a song called “Mom’s Guitar” by Stuart Kabak, which pays tribute to the power of song and of passing music on from one generation to the next. The guitar Cash plays was once owned by a cousin of her husband named Gilad who perished as a soldier in the Yom Kippur War in 1973.

Perhaps the album’s most affecting song on the CD is Cash’s version of Kabak’s “Numbers” which describes an emotional encounter with an elderly Holocaust survivor.

Among the more humorous songs are “Free Food Bar,” about a mother’s desire to fulfil the varied menu demands of her children – one’s a vegetarian, another can’t stand veggies, a third likes everything done fancy while a fourth just eats corn flakes – and Deirdre Flint’s witty “Bridesmaid’s Dress Song,” about the horrible, expensive, never-to-be-worn-again creations so many bridesmaids are forced to wear.