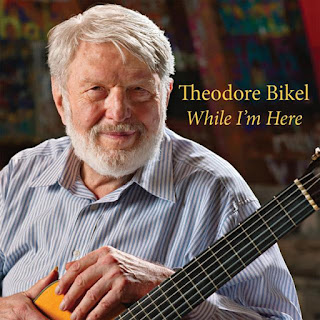 (This is an expanded version of a review published in the September 26, 2016 issue of the Ottawa Jewish Bulletin.)

There is no doubt that Theodore Bikel – who died last year at age 91 – was one of the greatest Jewish actors and folksingers of our time. This new 2-CD collection highlights both aspects of Theo’s distinguished career.

The first CD is a compelling 62-minute set of spoken word pieces, recorded not long before he died, in which Theo – with his actor’s skill – tells stories from his long life and career. Among other stories, we hear about his relationship to Judaism, his move as a young man to pre-state Palestine, his early years as an actor in Israel and London, his move to America, his passion for social justice causes, his love of Yiddish language and culture and more.

The second CD is a collection of folk and Broadway songs – more than half of them specifically Jewish folksongs sung in Yiddish, Hebrew and Ladino – drawn from various sources recorded over many years. Many of them are recent recordings, which show that Theo never lost any of his ability to communicate the essence of a song, while some date back to the 1960s.

“Partizaner-Marsh,” “Erev Shel Shoshanim,” “Un Az Der Rebi Tantz,” and “Oh Freedom,” the African-American civil rights anthem Theo recorded at a 1965 synagogue concert, are just a few of the many highlights from these songs. Others include “Wasn’t That a Might Day,” Theo’s song about Hurricane Katrina that he based on “Wasn’t That a Mighty Storm,” a song about the hurricane and flood in Galveston, Texas in 1900 that killed thousands of people, and “When I’m Gone,” Phil Ochs’ song about needing to get things done and living life to its fullest while we can. The album’s title, While I’m Here, comes from the refrain to Phil’s song.

Theodore Bikel accomplished so much while he was here and these two CDs are a wonderful summation.

Kudos to producers Michael Stein, Cathy Fink and Marcy Marxer for assembling this excellent set and to music historian Mary Katherine Aldin for her excellent notes. 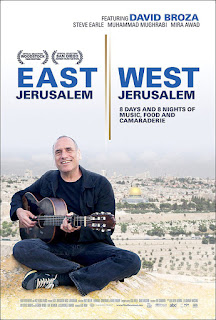 (A version of this review was published in the September 26, 2016 issue of the Ottawa Jewish Bulletin.)

In 2014, I wrote about Israeli singer-songwriter David Broza’s extraordinary CD, East Jerusalem/West Jerusalem. Broza recorded that album in an East Jerusalem recording studio collaborating with a diverse group of Israeli, Palestinian and American – Jewish, Muslim and Christian – singers and musicians. This DVD is an 84-minute documentary about the making of that album.

The film and the music made by Broza and his friends show what is possible in the Middle East when Israelis and Palestinians come together to make music, share meals and walks, and relate to each other as friends and collaborators.

Broza’s album East Jerusalem/West Jerusalem was a remarkable achievement and this documentary shows how it came to be. 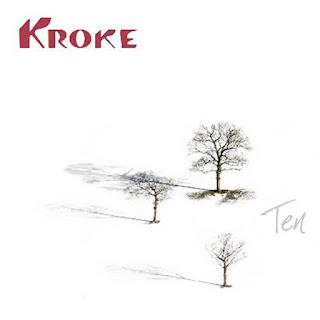 (This review was published in the September 26, 2016 issue of the Ottawa Jewish Bulletin.)

Kroke is a trio – Tomasz Kukurba on viola, Jerzy Bawol on accordion, and Tomasz Lato on double bass – formed more than 20 years ago by three graduates of the Academy of Music in Kraków, Poland (Kroke is Yiddish for Kraków), to play traditional klezmer music.

While their music – which is mostly instrumental, but with vocalizing that usually seems wordless – remains inspired by klezmer music, Ten, obviously their 10th album, is filled entirely with their lovely, sometimes brooding, original compositions.

The interplay of the three musicians (plus percussionist Slawek Berny on six of the nine tracks and vocalist Anna Maria Jopek on one) is quite remarkable. The instruments weave in and around each other sometimes supporting a soloist, sometimes achieving a unified almost-orchestral sound.

Among the highlights are “Mirrors,” the longest piece at seven minutes, a musical conversation in which textures and tempos constantly shift; “Once Upon a Time,” which seems like it could be a soundtrack to a fairytale’s walk in the woods; and “Passacaglia for 3,” a quietly layered composition highlighted by the pulsing, heartbeat-like pacing of Lato’s bass.