I saw my friend Stan Rogers perform countless times over an eight year period beginning in 1975 when we first met at the Mariposa Folk Festival in Toronto. I saw him at concerts, club dates and festivals all over Canada and the northeastern U.S. and some of those times were shows I produced at the Golem, the Montreal folk club I ran in the 1970s and ‘80s. His first Golem dates were in February 1976 and his final dates there were in December 1982.

Stan was scheduled to return to the Golem in September 1983 but his life, along with 22 others, was tragically cut short on June 2 that year in an Air Canada airplane fire at the Cincinnati airport.

I remember how thrilled and proud Stan was when his son Nathan was born in 1979 and, as I noted in my review of Nathan Rogers’ album, The Gauntlet, I know how proud Stan would have been to see the man and the artist Nathan has turned out to be.

I mentioned how often I’d seen Stan perform because Nathan, who is now the age Stan was when he was killed, was in Ottawa at Centrepointe Theatre this past Saturday, November 17, performing a concert in tribute to his father, and before the show I was kind of worried about how Nathan would approach both the material and the larger-than-life legend about his father that developed in the years and now decades following his death.

I needn’t have worried. Nathan, who physically resembles his father (although he’s much thinner), approached the concert and the material with a relaxed sense of humour and arrangements that both respected Stan’s own from 30 and more years ago and brought in his own contemporary musical approach. Nathan, for example, played many of the songs at a somewhat brisker clip than Stan did. And although Nathan’s voice is somewhat higher and thinner than Stan’s was, the genetic similarities in the timbre is unmistakable.

Most of the set list was devoted to Stan’s better-known songs. As Nathan noted, there are certain songs that you just have to do in a Stan Rogers tribute concert. Among the de rigueur numbers were such classics as the inspirational “Mary Ellen Carter,” which remains my favourite Stan Rogers song, “Northwest Passage,” and “Barrett’s Privateers,” which certainly garnered the most audience participation of the evening.

Among the other highlights were “Lies,” “The Field Behind the Plow,” “Tiny Fish for Japan” “Make and Break Harbour,” “The Jeannie C,” “Free in the Harbour” and “Canol Road,” which he prefaced with a story of a bar brawl Stan had in Jasper, Alberta, circa 1978. I remember Stan telling the story back in the day – but Nathan had a great epilogue centred on his own visit to the same bar 30-odd years later.

While I mentioned that Nathan’s arrangements remained essentially faithful to Stan’s, the two best moments for me came when he departed wholly from Stan’s approach. Nathan took “Northwest Passage,” which Stan performed a cappella, and added a band arrangement based on his guitar playing, to end the formal concert. And then, in what was surely an inevitable encore, he sang “The Flowers of Bermuda,” which Stan used to play in an exciting, fast, band arrangement, as a beautiful, slow a cappella ballad.

While most of the concert was devoted to Stan’s marvelous original material, there were also a couple of covers – Archie Fisher’s beautiful “Dark Eyed Molly” and Royston Wood’s comical “Woodbridge Dog Disaster” – drawn from Stan’s repertoire.

With the exception of “The Flowers of Bermuda,” which Nathan performed solo, he received excellent back-up throughout from guitarist JD Edwards, fiddler Andrew Bryan and Ottawa bassist Stuart Watkins.

The audience – most of whom, like me, were old enough to remember seeing Stan play these songs back in the day – loved the concert and the standing ovation was well-deserved.

The awards went to:

TRADITIONAL ALBUM OF THE YEAR

CONTEMPORARY ALBUM OF THE YEAR

TRADITIONAL SINGER OF THE YEAR

INSTRUMENTAL GROUP OF THE YEAR

ENGLISH SONGWRITER OF THE YEAR

FRENCH SONGWRITER OF THE YEAR

SOLO ARTIST OF THE YEAR

WORLD GROUP OF THE YEAR

Sultans of String - MOVE
NEW/EMERGING ARTIST OF THE YEAR

PRODUCER OF THE YEAR

YOUNG PERFORMER OF THE YEAR

Gerry Taylor
Congratulations to all the nominees and recipients and to the Canadian Folk Music Awards organizers. 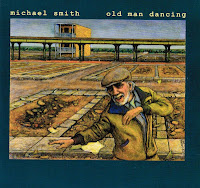 If “The Dutchman” was the only song Michael Smith ever wrote, I’d put him on my list of great songwriters. But Michael has consistently written many great songs over the past 40 years or so and cemented his place on the list many times over.

Some of the most recent examples of Michael’s great writing are on Old Man Dancing, his new CD and, once again, he uses the power of finely-crafted lyrics, elegant melodies and minimalist arrangements to draw the listener into a series of compelling story songs.

Some of these are songs in which Michael assumes the character of real people. In “Ghost of Lash LaRue,” he becomes the 1940s movie cowboy roaming around Hollywood. In “Roger Maris,” he uses the template of Woody Guthrie’s “Buffalo Skinners” to sing from the perspective of the ghost of the baseball great defending his 1961 record 61 home runs over the tainted accomplishments of “the muscle bound clowns sticking holes in themselves.”

The most gripping of the real people songs is “Ballad of Phil Spector,” in which he sings from the perspective of the bizarre record producer covering everything from the early hits in 1958 to the strange sessions with Leonard Cohen to his current imprisonment for murder.

In the lovely “Pittston Stove,” Michael seems to be singing about childhood memories. The latter song vividly recreates scenes with aunts and uncles centred on the warmth of the stove’s fire.

The most amusing song is “Ballad of Dorian Gray,” which Michael sings as a hipster version of the narcissistic Oscar Wilde character whose portrait ages instead of himself. He very effectively uses stereo effects to have Dorian and the portrait seemingly singing a duet.

The arrangements are all built around Michael’s guitar playing with creative use of his own overdubbed bass and percussion where appropriate.

Tom Russell – Heart on a Sleeve 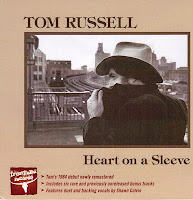 I wasn’t one of the lucky few who first heard Heart on a Sleeve, Tom Russell’s first solo LP, when it was originally released as an LP in 1984, although I did catch up with it when it was first reissued on CD about a decade or so later.

But, even before I actually heard first heard Tom on Road to Bayamon, his second solo LP, I was already a big fan of his songwriting having heard some of his early gems in versions by Bill Staines, Ian Tyson and Nanci Griffith. Two of those gems, the amazing “Gallo del Cielo,” which I first heard by Ian on the first of his great cowboy culture LPs, and “St. Olav’s Gate,” which I first heard Nanci sing at the Golem, the folk club I ran in Montreal in the 1970s, and ‘80s, are from Heart on a Sleeve, an album which revealed a singer and songwriter already well on his way to greatness.

“Gallo del Cielo” and “St. Olav’s Gate,” both of which Tom would later re-record, are certainly among the highlights of the debut album.

“Gallo del Cielo” is a vivid Tex-Mex border ballad about a desperate Mexican and his stolen fighting rooster. It’s exciting, it’s heartbreaking and every time I’ve seen Tom live he’s brought down the house with it. It’s also a great showcase for the stunning guitar playing of Andrew Hardin, an amazing player who worked with Tom for about 25 years beginning around the time of this album

“St. Olav’s Gate,” set in Oslo, is an insightful song about passing encounters that don’t turn into what we think they might have. As I mentioned in my booklet essay for The Tom Russell Anthology: Veteran’s Day, most of our younger selves have been that drunken guy waiting in vain at St. Olav’s Gate, even if our personal St. Olav’s Gate wasn’t in Oslo.

Among the other highlights are “One and One” and “The Dance,” a pair of terrific duets recorded with Shawn Colvin about four years before her own debut album; “Cropduster,” sung from the perspective of a crop dusting pilot lost in his fantasies; “Chinese Silver,” a western ballad about an unobtainable woman; “Canadian Whiskey,” which could almost be about the same woman in “Chinese Silver” a couple of decades later; and “Blinded By the Light of Love,” a Saturday night song with a great Sunday morning arrangement. 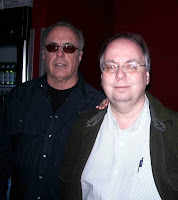 In addition to the 12 songs on the original LP, there are six bonus tracks – including “The Dance” with Shawn Colvin – recorded around that time. The arrangements, thanks to players like Andrew Hardin, are terrific and the remastered sound, thanks to John Yuelkenbeck, is fabulous.

The CD is only available online through villagerecords.com and at the merch table at Tom’s concerts.

Speaking of Tom’s concerts, he’ll be in this part of Canada at Hugh’s Room in Toronto on Thursday, November 22, and at Petit Campus in Montreal on Saturday, November 24 as part of the Wintergreen Concert Series.