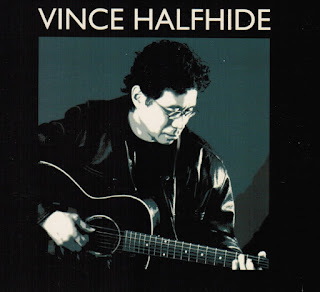 Master guitarist Vince Halfhide is a veteran Ottawa musician. Decades ago, he played with Terry Gillespie in Heaven’s Radio and in more recent years I’ve seen him as an MVP sideman for artists like Sneezy Waters and Missy Burgess. I’ve also seen him on occasion playing solo and quickly came to appreciate that he’s a fine singer-songwriter himself. I’ve long hoped that he’d release a CD that I can enjoy and share on the radio.

With the eponymously named Vince Halfhide, Vince has delivered that CD – a fine collection of 12 well-crafted original songs mostly in folk and acoustic blues veins.

The album open with “Memphis Rounder,” an infectious ragtime blues that hearkens back to the days when legends like Furry Lewis and Gus Cannon were playing for change on Beale Street in Memphis. Other tunes drawing on the blues include “Sonny Boy Said,” a tribute to delta blues legends Sonny Boy Wiliamson and Robert Johnson, and to blues mythology, featuring some hot licks from Vince’s guitar that are matched by Monkeyjunk’s Steve Marriner on harmonica, and “Devil Made Rock & Roll,” a heaven-and-hell tune on which Vince’s guitar and vocals are underpinned by producer Ken Whiteley on the organ and Rebecca Campbell’s haunting harmonies.

One of the most compelling of the folk-styled songs is “Teizo’s Song,” a ballad sung from the perspective of an immigrant who arrived in Canada from Japan in 1910 and worked hard to build a life for himself and his family only to lose his property, rights and freedoms – along with 22,000 other Japanese Canadians placed in internment camps – during the Second World War.

Other highlights include “Sleepy Little Town,” a gentle song that captures the scene in a quiet place far removed from urban life, and “The Junk Man’s Singing,” a character study featuring some nice fiddling by Rosalyn Dennett.

Vince will be launching Vince Halfhide with a concert on Friday September 7, 8 pm, at the Westboro Masonic Hall in Ottawa. Tickets are available at his website.

Posted by Mike Regenstreif at 3:32 PM