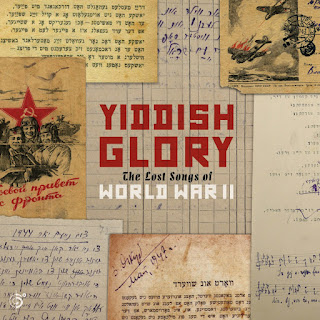 During the Second World War, ethnomusicologists at the Kiev Cabinet for Jewish Culture set out to preserve the new Yiddish songs documenting the experiences of Jews fighting the Nazis in the Red Army, as well as those working on the home fronts, and songs reporting on such atrocities as the massacre at Babi Yar. Following Stalin’s post-war anti-Semitic purge, these songs were thought lost. However, the lyrics of many of the songs were rediscovered in the 1990s in unmarked boxes found in the Vernadsky National Library of Ukraine. Yiddish Glory:The Lost Songs of World War II is an extraordinary album – featuring five singers and a group of superb instrumentalists – recorded in Toronto that documents some of those songs.

Among these fascinating songs are “Shpatsir in Vald (A Walk in the Forest),” sung by Sophie Milman, in which a young woman and a young soldier about to go off to fight Hitler’s army say their farewells; “A Shturemvint (A Storm Wind),” sung by Psoy Korolenko, a lyric that promises to keep fighting until fascism and Hitler are defeated; and “Babi Yar,” also sung by Korolenko, based on witness accounts of the 1941 massacre of more than 33,000 Jews.

An extensive booklet includes an essay about the project, notes on all of the songs and the lyrics in Yiddish with English translations. Yiddish Glory is certainly one of the most powerful albums of Jewish music released in recent years.