Nefesh Mountain – Beneath the Open Sky 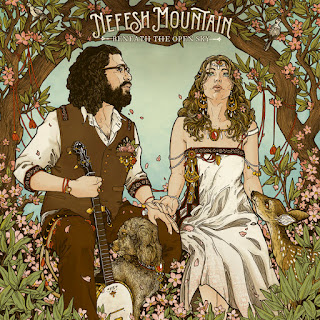 Although there are a significant number of Jewish virtuoso bluegrass musicians, the genre itself has rarely been a vehicle for specifically Jewish-themed music. Margot Leverett and the Klezmer Mountain Boys was a great band that combined klezmer and bluegrass traditions but Nefesh Mountain – the husband and wife duo of multi-instrumentalist Eric Lindberg and singer Doni Zasloff – are making Jewish music within a traditional bluegrass framework.

Songs like “Halleluyah,” which I suspect will eventually become a staple in non-Orthodox musical prayer services, and “On and On (L’Dor Vador),” about the continuity of generations, easily flow back and forth from English to Hebrew lyrics, while the traditional bluegrass gospel standard, “Bound for the Promised Land,” is stripped of its Christian references and rewritten by Nefesh Mountain as wishful expression for peace in the Holy Land. One of the most joyous songs is their bluegrass setting of “Oseh Shalom,” and after an intense collection of full band bluegrass tunes, they end the CD quietly with a lovely version of Irving Berlin’s “Russian Lullaby.”