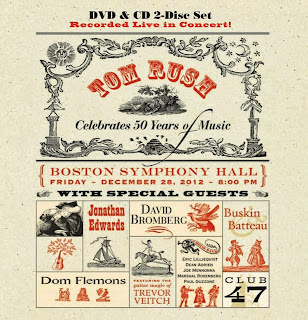 My, but the years have flown by. When I was getting heavily into folk music – say 45 or so years ago – Tom Rush’s early Prestige and Elektra recordings were among the first LPs I bought. And I kept on collecting Tom’s Columbia albums into the ‘70s – as well as most of the later CDs he’s released independently. So his music has been part of my life for almost all of the years that Tom and a bunch of his musical friends celebrated with a concert on December 28, 2012 at Symphony Hall in Boston – just across the Charles River from where his career took off at Club 47 in Cambridge.

Playing with Tom that night were some of the same back-up musicians who’ve worked with him over many years – Trevor Veitch, Eric Lilljequist, Dean Adrien, Joe Mennonna, Marshal Rosenberg, Paul Guzzone – as well as special guests Buskin & Batteau (I remember David Buskin, Robin Batteau and Marshal Rosenberg being in Tom’s band at the Bottom Line in New York, circa 1978, when Priscilla Herdman, who I was working with at the time, opened four shows for Tom), Dom Flemons (of the Carolina Chocolate Drops), Jonathan Edwards, and David Bromberg. The guests each performed their own songs and sat in as part of the band for the night.

Tom turns in stellar performances of songs from throughout his career highlighted by such numbers as his own song, “No Regrets,” done in a medley with the guitar instrumental “Rockport Sunday,” Joni Mitchell’s always stunning autumn classic, “Urge for Going,” Murray McLauchlan’s poignant “Child’s Song,” which Tom still sings credibly despite the fact that the song is from the perspective of a 20-or-so-year-old and he’s past 70, David Wiffen’s bluesy “Drivin’ Wheel,” and, of course, “Wasn’t That a Mighty Storm.”

The guests’ performances include David Bromberg’s version of Blind Willie McTell’s “Statesboro Blues,” Buskin & Batteau’s “Lancelot’s Tune (Guinenere),” Dom Flemons’ romp through “Your Baby Ain’t Sweet Like Mine,” and Jonathan Edwards’ nostalgic take on the 1960s anthem “Get Together.” Each of the guests is featured on one track on the CD and gets a second song on the DVD version (although, for some reason, David Bromberg’s second song is relegated to the DVD bonus features).

The DVD version also has a different running order – which, I believe, is more reflective of the actual concert – and expanded intros and comments from the artists, and bonus features built around an interview with Tom about some of his career highlights.

Posted by Mike Regenstreif at 4:04 PM