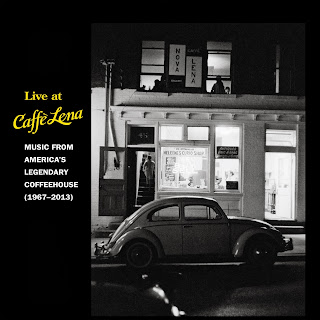 I got involved in the Montreal folk scene as a teenager just as the 1960s were about to fade into the ‘70s. I was just a little too young to have hung out at the New Penelope, but I was there at the Back Door, the Yellow Door and the Montreal Folk Workshop. By around 1971, I was helping Chuck Baker run the Yellow Door – which I continued to do until I took over the Golem, another legendary Montreal folk club, in ’74.

In 1972, I also began producing concerts at Dawson College and McGill University and one of the first artists I booked was Bruce “Utah” Phillips (a good friend who I would work with often over the years). Bruce insisted that I had to come down to Saratoga Springs, New York and meet his friend Lena Spencer. Her Caffé Lena, then about a dozen years old, was already one of the most legendary folk clubs in North America.

So, the next time Bruce was playing there – it must have been sometime in 1973 – I made the three-hour trip down to Saratoga and spent the weekend hanging out at the Caffé Lena, chatting with her and Bruce for hours on end, and sleeping in a spare room at Lena’s apartment. I remember thinking that I may well have been sleeping in the same bed that Bob Dylan had slept in 10 or 11 years earlier. That weekend was a big part of my folk music education.

Saratoga became part of my stomping grounds for the next dozen or so years. I’d visit two, three, four times per year, either trips specifically to hang out there or when I’d pass through on my way to or from New York City and I spent may evenings listening to music at the Caffé and many more hours deep in conversation with Lena.

Saratoga is about halfway between Montreal and New York City, so Lena and I sometimes co-ordinated our booking efforts to help route performers, and then in the late-‘70s and early-‘80s when I was running a small booking agency for folk music artists, the Caffé was a place I often booked them at.

Lena passed away in 1989, but her intimate little folk club, the Caffé Lena, has carried on as a non-profit venue. With a history stretching back 53 continuous years, the Caffé is the most historic of current folk music venues, and still one of the most pre-eminent.

By 1967, some folk music aficionados had begun recording some of the concerts at the Caffé and Live at Caffé Lena: Music from America’s Legendary Coffeehouse 1967-2013 is a heart-warming collection of 47 songs on three CDs culled from about 700 of those concerts (or from the regular benefit concerts in larger Saratoga halls held to raise funds to keep the wolves from the Caffé Lena’s door).

While it’s too bad there was nothing from the Caffé’s earliest years – so no Dylan track – but some of the artists from back then who continued to play there in later years like Dave Van Ronk, the Greenbriar Boys, Jean Ritchie and Hedy West are well represented along with a who’s who of folk music greats from 1967 to now.

There are lots of wonderful moments, much too many to list them all, but certainly some of my personal favorites were four songs by friends of mine recorded when I was there in the audience: David Amram’s hipster-jazz-bluegrass tune, “Little Mama”; Rosalie Sorrels’ “Travelin’ Lady”; Utah Phillips’ “The Green Rolling Hills of Western Virginia”; and Dave Van Ronk’s “Gaslight Rag,” a tongue-in-cheek recollection of another legendary folk music coffeehouse.

There are many other old friends represented in the collection. Among them Kate McGarrigle & Roma Baran, recorded in 1972, who do an obscure song of Kate’s called “Caffé Lena,” written in tribute to Lena and her club. Kate would later use the melody as the basis for her song “NaCL” and, in 1974, Kate and Roma formed a trio with Kate’s sister, Anna McGarrigle, that played at a small, very select number of venues that included the Caffé Lena, the Golem, my folk club in Montreal, the Ark in Ann Arbor, and the Mariposa Folk Festival in Toronto.

Other highlights – many of them by other old friends – include songs by Christine Lavin, who Lena pointed out to me as an artist to watch out for when she was a Caffé Lena waitress, Tom Paxton, Patrick Sky, David Bromberg, Ramblin’ Jack Elliott, Mike Seeger, Arlo Guthrie, Happy & Artie Traum, Paul Geremia, Bill Staines, Bill Morrissey, John Gorka, Pete Seeger, Rory Block, Roy Book Binder, Chris Smither, Mary Gauthier, Sarah Lee Guthrie & Johnny Irion, and Lena Spencer herself, backed up by members of Bottle Hill in a 1972 recording, who quite appropriately ends the third CD with “Dear Little Café.”

If I have a quibble, it would be that there are several artists, stalwarts of the Caffé at one time or another, who really should have been included in the collection. Certainly among them are Tom Mitchell, a great, under-appreciated singer-songwriter who grew up in the Saratoga area; the late Logan English, an influential folksinger and playwright from Kentucky who lived in Saratoga for quite a few years before his death in a 1983 traffic accident; and Michael Jerling, a fine singer-songwriter who has been based in Saratoga for many years.