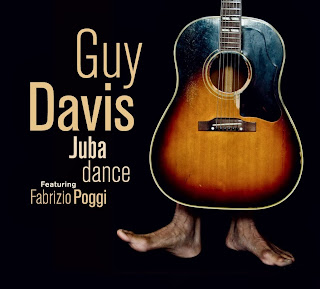 Over the past two decades, Guy Davis has been one of the premiere interpreters of traditional acoustic blues and one of the songwriters whose in-the-tradition work has kept the genre vital and alive in modern times. In the hands of Guy and a few of his peers, the traditional blues forms remain timeless – as relevant in 2013 as they were 30, 50 or 80 years ago. All of the recordings Guy has released since the limited edition Guy Davis Live in 1993 (repackaged as Stomp Down Rider in 1995) have been both a homage to Guy’s musical forebears and a crucial contribution to contemporary music.

Juba Dance, about half of which features excellent contributions from Italian blues harmonica player Fabrizio Poggi, is one of Guy’s best as it ranges through various styles from jug band to delta blues to gospel and old-time.

I love jug band music and Guy kicks off the album with “Lost Again,” a happy sounding tune that sounds like it could have been played by the Memphis Jug Band 80 or so years ago. A jug band-meets-classic blues feel animates Guy’s version of Bertha “Chippie” Hills “Some Cold Rainy Day,” a delightful duet with Lea Gilmore.

Guy pays direct tribute to some of his musical ancestors by reinterpreting and revitalizing songs written or associated with them.

His acoustic version of “My Eyes Keep Me in Trouble,” seems to have lost none of the force of Muddy Waters’ electric original. Blind Lemon Jefferson’s “See That My Grave is Kept Clean” seems organically suited to Guy’s banjo accompaniment and gets a deep gospel feel from the formidable harmonies of the Blind Boys of Alabama, and Blind Willie McTell is recalled in Guy’s intense version of “Statesboro Blues.

Another tribute is Guy’s “Did You See My Baby,” in which he pays homage to the whoop-and-holler style of Sonny Terry (that’s Guy, not Fabio playing harmonica on this track). Guy also added a guitar part in homage to Brownie McGhee, Sonny’s long-time partner. 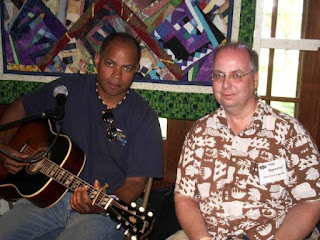 A couple of other banjo-driven songs are among the album’s highlights. “Dance Juba Dance,” is a “butt shaking” song that recalls the African American string band tradition, and “Satisfied,” with Guy playing some very bluesy slide banjo is a powerful prison song.