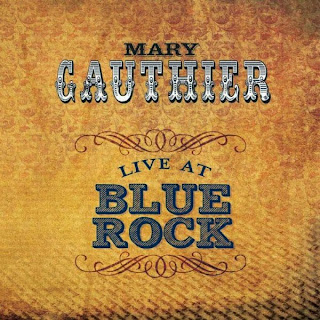 MARY GAUTHIER
Live at Blue Rock
In the Black
marygauthier.com

Mary Gauthier, who was born in New Orleans to a mother she never knew and given up for adoption, had a troubled childhood that led to problems with alcohol and drugs. By the 1990s, she was clean and channeling her creativity into songwriting and performing emerging with her first album in 1997 at age 35. She has since released seven more albums of no nonsense, melodic songs that go deep into the soul and mind.

Among the strongest tracks are “I Drink,” a brutally honest first-person account of alcoholism rooted in an abusive childhood; “Karla Faye,” a harrowing narrative about Karla Faye Tucker, a murderer and the first woman to be executed in Texas since 1863; “Blood is Blood,” an expression of feelings by a woman who grew up not knowing anything about her birth parents; and “Wheel Inside the Wheel,” an epic song inspired by the circle of life as represented in an ultimate New Orleans Mardi Gras parade.

The Eaglesmith material is highlighted by “The Rocket,” which brilliantly captures the feelings of an old man at a train station watching the trains roll in and out with his lifetime’s memories.

Mary has several Canadian concert dates coming up including October 9 at Hugh’s Room in Toronto; October 10 at the National Arts Centre Fourth Stage in Ottawa; October 11 at Le Divan Orange in Montreal; and, October 12 at the Branch Restaurant in Kemptville.