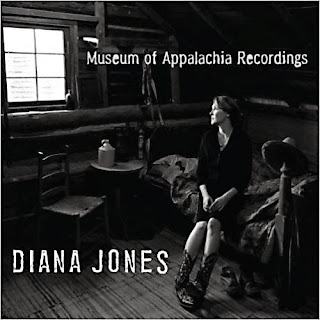 As I noted in my review of Diana Jones’ 2011 album, High Atmosphere, she “creates seemingly simple and plainspoken (plain sung, really) songs which draw on the traditions of southern folk music. While the songs and performances may be seemingly simple, they are, in fact, skilfully drawn pieces that weave together timeless melodies with lyrics that are poetic and oblique on some songs and which tell stories and present fully fleshed out characters on others.”

That description is just as applicable to her new album, Museum of Appalachia Recordings, which she recorded off-the-floor with the musicians – multi-instrumentalists Matt Combs and Shad Cobb, bassist Joe DeJarnette, and harmony singers Laurelyn Dossett and John Lilly – all seated in a circle in a stark cabin at the Museum of Appalachia in Tennessee.

These are all Diana’s own songs but all of them ring with the authenticity of traditional folksongs. Among them are “Song for a Worker,” in which someone who toils long hours – maybe in a coal mine or factory – gives thanks for their day of rest; “Ohio,” a tragic tale of true lovers separated by parental interference; “Love O Love,” with echoes of the traditional “Careless Love,” about the effects of unrequited, or lost, love; and “Sparrow,” which seems to be about a woman fleeing a life of abuse.

There are echoes of religious fundamentalism running through several of the songs – a reflection that the Appalachian Mountains are deep in the American Bible Belt.

The all-acoustic arrangements featuring, guitars, fiddles, mandolins and string bass, are perfectly to the traditional orientation of the songs. As I also noted in my review of High Atmosphere, “these songs, and the rest, represent some of today's finest songwriting. Diana Jones is one of the most essential folk-rooted songwriters.”

Posted by Mike Regenstreif at 3:54 PM