Woody Guthrie at 100! Live at the Kennedy Center 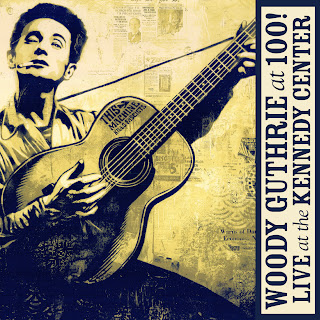 I posted numerous reviews in 2012 of albums celebrating the centennial of the birth of Woody Guthrie (1912-1967), the folksinger and songwriter whose work over a brief period of about 20 years from the 1930s to the early-‘50s, has inspired and informed virtually every folk-based singer and songwriter – whether directly or indirectly – ever since. Woody Guthrie at 100! Live at the Kennedy Center is a CD/DVD combination that documents a very special evening celebrating the songs, spirit and centennial of Woody Guthrie that was held in Washington, DC on October 14, 2012.

It was a truly wonderful concert that mainly included performances of some of Woody’s best known classics as well as a few of the great new songs that have been created in recent years when contemporary composers have set Woody’s previously-unknown words – from among the thousands of newly discovered song lyrics, poems, letters, etc. – to music.

The set list drew on many facets of Woody’s songs. There were fun kids’ songs like “Howdido,” performed by the Old Crow Medicine Show, and “Riding in My Car,” performed by Donovan, to such dust bowl ballads as an achingly beautiful version of “I Ain’t Got No Home” sung by Rosanne Cash, “Do Re Mi,” performed by John Mellencamp, and “So Long, It’s Been Good to Know Yuh,” given a stellar bluegrass treatment by Del McCoury and Tim O’Brien.

Other great classics included Jimmy LaFave’s terrific version of “Hard Travelin’” with Tim O’Brien on mandolin and Radoslav Lorkovic on accordion; a version of the outlaw ballad “Pretty Boy Floyd” by Rosanne Cash and guitarist John Leventhal that seemed like a tribute to both Woody and Rosanne’s father, Johnny Cash, with its boom-chicka-boom arrangement; Sweet Honey in the Rock’s glorious a cappella vocals on “I’ve Got to Know” (which they prefaced with a verse from the traditional hymn “Farther Along,” whose tune Woody used for the song); Judy Collins' equally glorious rendition of “Pastures of Plenty; and Ramblin’ Jack Elliott’s distinctive version of “1913 Massacre” that masterfully tells the story of a horrible event a century ago.

Although long considered a classic Woody Guthrie song, “Deportees,” about the 1948 crash of an airplane returning migrant farm workers from California to Mexico, was actually a poem of Woody’s set to music by Martin Hoffman in the late-1950s. It may well have been the first of many of Woody’s songs that have been brought to life by contemporary composers. Ani DiFranco does a poignant version of “Deportees” that is enhanced by some exceptional guitar playing by Ry Cooder and Dan Gellert’s fiddle.

The other new Woody Guthrie songs – all of them excellent songs – were performed by their composers and include Joel Rafael’s “Ramblin’ Reckless Hobo”; Tom Morello’s anthemic “Ease My Revolutionary Mind”; Lucinda Williams’ erotically-charged “House of Earth,” which is recorded here for the first time; and Jackson Browne and Rob Wasserman’s beautiful “You Know the Night,” performed in a version that is highly abridged from the great 15-minute original on Note of Hope. 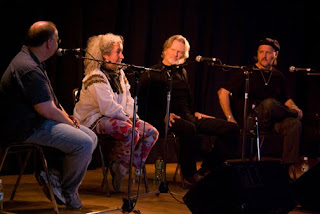 The DVD also includes actor Jeff Daniels (who is also an accomplished singer-songwriter) performing a couple of spoken word readings from Woody’s writing and a thank you from Nora Guthrie..

As a great as all the performances are (and they are all great), the most special moments are when the entire cast gathers for the concert finale, hootenanny sing-along versions of “This Train is Bound for Glory” and “This Land is Your Land” that have the performers trading verses and lines and everyone in the concert hall singing along.

Woody Guthrie at 100! Live at the Kennedy Center is an inspired and inspiring concert recording and a fitting cap to the centennial celebrations.

Sadly, though, the concert recording is dedicated to the memory of Jackie Hyde Guthrie, Arlo Guthrie’s wife and a friend to many of us on the folk scene, who passed away from liver cancer on the very day of the concert.

The DVD also includes some rare bonus footage of Woody singing fragments from three songs, including one with Sonny Terry and Brownie McGhee.