The Ottawa Folk Festival, now in its third year as part of the Ottawa Bluesfest organization, is set to unfold between Wednesday, September 4 and Sunday, September 8 at Hog’s Back Park – a great setting for a music festival.

In recent years, the Ottawa Folk Festival – or just Folkfest as many now refer to it – has become less a traditional folk festival and more of an all-encompassing, genre-blending music festival in the same way that Bluesfest isn’t really about blues (while still retaining some blues content) and the Ottawa Jazz Festival isn’t really about jazz (while still retaining a lot of jazz content). That Willie Nelson headlined Jazzfest, Great Big Sea headlined Bluesfest and Neil Young is headlining Folkfest all probably had a lot more to do with who was available to play in Ottawa at the times of those particular festivals than about jazz, blues or folk visions.

As I noted in my reviews of last year’s Ottawa Folk Festival, the Folkfest has really become two overlapping events taking place on the same grounds over the same days. There’s a (mostly indie) rock and pop festival which draws in big crowds – mostly much younger than typical folkies – geared to the headliners and some of the supporting acts of any particular night (I say night because this is a nighttime crowd that isn’t really there for the daytime programming on the weekends).

Then there is the actual folk festival unfolding out mostly on the smaller stages, particularly on the free stages, and most particularly during the day on Saturday and Sunday during the workshop programming. The audience here, from young families with children to die-hard folkies, are the kinds of people who have been attending folk festivals for decades.

Which is not to say there isn’t overlap with some of the folk-rooted artists playing on some of the bigger stages, and some of the rock or pop artists participating in the workshops or playing on the smaller stages.

Here are my recommendations of Folkfest highlights to watch out for each day.

Wednesday – There really is only one show happening on opening night: Neil Young and Crazy Horse doing a two-hour set with Patti Smith doing a 75-minute opening set (I gather that Smith has been on tour opening for Young).

While primarily a rocker, Neil Young has released any number of great folk-oriented albums over the years and occasionally gone out as a solo, acoustic singer-songwriter. Last year, with Crazy Horse, he put out an album called Americana which was mostly made up of hard-rocking versions of folksongs like “Tom Dula” and Woody Guthrie’s “This Land is Your Land.”

Update (August 19): "Ottawa Folk Festival organizers today confirmed that Neil Young will not be performing on September 4 at the Ottawa Folk Festival. This is due to a hand injury sustained by guitarist Frank ‘Poncho’ Sampedro, whose doctor has indicated that Sampredo's hand requires additional time to heal properly. Festival organizers will announce refund details and other line-up updates before the end of this week."

Update (August 23): The Ottawa Folk Festival has announced that City and Colour (Dallas Green) will replace Neil Young on the night of September 4.

Thursday – My pick for Thursday are the Claytones, an Ottawa Valley band fronted by Kelly Prescott and Anders Drerup steeped in rootsy country music. I saw their set at the Folk Festival on the Canal in Montreal in June and was mightily impressed. The Claytones are playing on the free side of the festival.

Friday – Friday boasts a really interesting 1-2-3 lineup on the Tartan Homes stage with local singer-songwriter Amanda Rheaume, whose latest album, Keep a Fire, is a thought-provoking exploration of her family roots; Beth Orton, a British singer-songwriter who did an interesting version of my late friend Dave Van Ronk’s “Bamboo (River Come Down)” on the latest Rogue’s Gallery collection; and then Emmylou Harris & Rodney Crowell whose recent duo album, Old Yellow Moon, recalls Emmylou’s early days as a major artist when Rodney played in her Hot Band.

A couple of other interesting artists playing on other stages at the same time as that 1-2-3 lineup are Matt Anderson, an extraordinary guitarist steeped in acoustic blues and Robyn Hitchcock, another fine British folk-rocker who also contributed to the latest Rogue’s Gallery album. Robyn is playing on the free side of the festival.

Saturday – Things really get busy on Saturday with the workshops and lots of concerts going happening on the free side of the festival – as well as lots of stuff on the ticketed side. 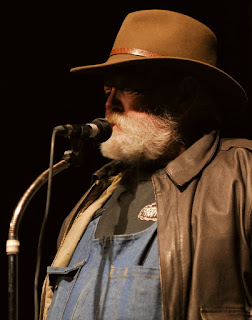 Other Saturday highlights include performances by Tift Merritt, an interesting alt-country singer-songwriter, Martyn Joseph, an equally interesting Welsh singer-songwriter and the incredible Carolina Chocolate Drops, the group at the vanguard of the revival of traditional African American folk music. Martin Joseph and the Carolina Chocolate Drops also perform Sunday.

Sunday – Again lots of workshops and concerts on the free side of the festival and a whole lot happening on the ticketed side.

Sunday highlights on the free side of the festival include concerts by Chris Smither, the great folk-blues singer-songwriter and interpreter; Sheesham and Lotus, who bring terrific vaudevillian showmanship to folk music; and Mo Kenney, a rising star on the Canadian singer-songwriter scene from Nova Scotia.

On the ticketed side, my Sunday picks include concerts by veteran blues artist Terry Gillespie; Lynn Miles, the great Ottawa-based singer-songwriter who has a stunning new album; David Lindley, an amazing guitar player whose music is steeped equally in American roots music and various world music styles; a contemporary version of the Wailers, the late Bob Marley’s band, led by Aston “Family Man,” who played bass in the original group; and the already-mentioned Martyn Joseph and Carolina Chocolate Drops who are back on Sunday.

And that’s just my picks. There’s lots of other music happening over the course of the Ottawa Folk Festival. The full schedule for the festival is available at this link.

Of course, I do have to express my disappointment that the first two nights of the Ottawa Folk Festival coincide with Rosh Hashanah, the Jewish New Year, which will keep many people – me included – away on those nights.