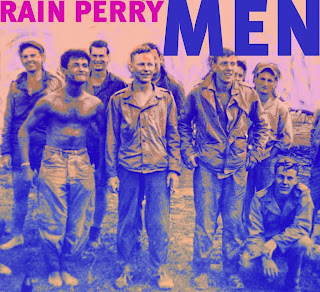 The nicest things about writing music reviews mostly for my own blog – as opposed to for newspapers and magazines, which I did for decades and still do on rare occasions – is that I only have to write about music that I really care about and about albums and artists that whose praises I want to sing. I don’t have nearly enough time to write about all that I’d truly like to write about so I don’t spend any time writing about music and artists I’m not enthusiastic about.

I say that because Men by California singer-songwriter Rain Perry is not the kind of album I generally like. I generally don’t care for recordings where all of the tracks are layered on by one musician playing most of the parts, or where many of the instruments are synthesized. I much prefer the sound of real instruments, particularly acoustic instruments, being played by different musicians, preferably at the same time. And like every rule, there are occasional exceptions: Leonard Cohen’s albums like I’m Your Man that were built around keyboards and drum machines or some of Laurie Anderson’s work, for example.

Rain’s Men is another exception. Although there are other musicians and singers making an occasional cameo on some of the songs, most of the songs are just Rain’s vocals on top of layered arrangements with producer and occasional songwriting collaborator Mark Hallman playing all the instruments – usually five or six different instruments per song.

But, there’s something about the quality of the songwriting and the warmth of Rain’s singing, that makes Men a rewarding collection.

Among the highlights are “Get in the Car,” a breezy rock ‘n’ roll tune for mature adults that includes a great Gram Parsons reference, “One of Those Days,” a mostly acoustic country-folk tune done as a duet with Matt the Electrician, and “Runaway Train,” a terrific rockabilly tune about a man who can’t be tied down that features several guest musicians, including Andrew Hardin, one of my favorite guitar players.

But the most extraordinary piece is “Atlas,” a combination of spoken beat poetry and quietly hypnotic electronic music somewhat reminiscent of Laurie Anderson’s best work, in which Rain fantasizes about what happens to Atlas, and to the world, when the Titan of Greek mythology gives up on holding the world on his shoulders in modern times.

As well as eight of her own songs, Rain also includes a couple of covers including a terrific version of “Then Came Lo Mein,” Robert Earl Keen’s story of a nervous breakdown in a Chinese restaurant.

Listening, I soon forgot my prejudices about the way this album was produced, and managed to lose myself in Rain Perry’s fine singing, her equally fine songs, and even in Mark Hallman’s arrangements.