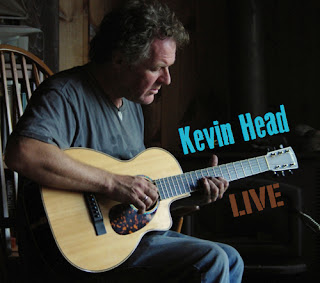 Kevin Head is one of those people I’ve known seemingly forever or, at least, since 1971 when we were both young pups on the Montreal folk scene – me helping Chuck Baker run the Yellow Door and getting my feet wet MCing the Sunday night hoots and Kevin playing those same hoots and doing his first weeknight gigs there.

In 1972, as a student at Dawson College, I started my first concert series. Kevin, a fellow student, was the opening act for Bruce Murdoch on the first concert I ever produced, 41 years ago. So we go back a long way.

After his Montreal years, Kevin spent a few years living and working in Nova Scotia and has since been based near Kingston, Ontario. Although he has remained a very active performer – primarily a regional performer around wherever he’s been living – Kevin’s recordings have been few and very far between. An LP, No Frills, came out in 1979 (Kate McGarrigle, who I was working with in those days, played on a couple of the songs) and a CD, Hear Them Callin’ (which got a lot of play on the Folk Roots/Folk Branches radio show) came out in 1995.

Live, recorded off the floor last October at Stonewater Pub in Gananoque, Ontario, is just Kevin’s third album. All 10 songs in the 40-minute set are originals – two reprised from earlier albums and eight others, written between 1971 and 2009, are commercially released for the first time. Kevin, who plays acoustic guitar and gets solid support from Cam Schaefer on keyboards, bassist Bob Arlidge, percussionist Jak Thrasher and harmony vocalist Vanessa Burnett, seems relaxed and engaging throughout the live show.

The most compelling song is “The Arrow,” about a fictional tragedy that unfolds in a family already devastated by the Canadian government’s sudden shutdown of the Avro Arrow military jet program in 1959.

Other highlights include “Thanks Hank,” written back in ’71, one of the best and most infectious tributes ever to Hank Williams (hearing it brought back lots of memories of Kevin doing it back in the day in Montreal); “Saturday Night in South Margaree,” which captures a magical night of music making on Cape Breton Island (although I wish there was a fiddle player sitting in on this number); “Laying It on the Line,” a story about an intense love relationship; and the show closing band workout “Backyard” (known as “Everyone Needs a Backyard” in earlier versions), one of those songs that plants an earworm in your brain that never quite goes away.

I hope it’s not so long a wait for Kevin’s fourth album.