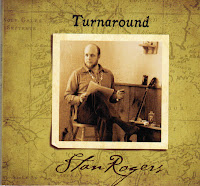 With Turnaround, first released on LP in 1978, and Between the Breaks… Live, from 1979, Stan Rogers’ second and third albums, Borealis Records continues its project of releasing remastered versions of the original albums from the tragically too-short career of the artist I’ve long thought to be Canada’s greatest folksinger and songwriter.

In the liner notes to the new version of Turnaround – which sounds incredible, much better than the LP or the first CD release – Ariel Rogers mentions that Stan “struggled with people not liking the album as much as the first,” Fogarty’s Cove, which had been released to great acclaim.

As I recall, I was one of those who didn’t like Turnaround as much as Fogarty’s Cove – at least initially. Fogarty’s Cove was a beautifully executed concept album whose songs captured the spirit of the people of Eastern Canada with seeming authenticity from the first track to the last. And there was an acoustic consistency to the production and arrangements which flowed throughout the album. Turnaround, on the other hand, was much more eclectic. Thematically, a few of the songs could have been on Fogarty’s Cove, others reflected more urban, big city settings, and a couple of others were more inner-directed. The production and arrangements were also more eclectic drawing on a variety of influences including folk, country and rock ‘n’ roll. But, as I listened repeatedly to Turnaround back in the day, it very quickly grew on me.

Even if I was initially resistant to some of the “Steeleye Stan” arrangements, there was never any doubt in my mind about the quality of the songwriting. Several songs have always been favourites. Among them is “Second Effort.” As I recall, Stan wrote the song  from the perspective of an Olympian dreading coming home without the gold (how appropriate to be writing about the song this week), but it could just as easily be about anyone who has reached for a dream and come up short. Another is “Song of the Candle,” an ambitious song of philosophical examination.

But, perhaps, my very favourite is “Turnaround,” the title track, a quiet song contemplating life and choices made which ends the album. (In 1979, I was helping folksinger Priscilla Herdman choose songs for her album Forgotten Dreams and “Turnaround” was one I encouraged her to do. She did a magnificent version.)

As mentioned, there were some songs which continued with themes introduced on Fogarty’s Cove, including “The Jeannie C,” a heartbreakingly poignant song about a fisherman whose spirit was broken when his boat – which had been built by his father and named for his mother – was lost. 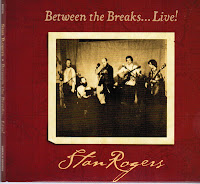 As well as being a gifted singer and brilliant songwriter, Stan was an incredibly dynamic live performer and his third album was recorded live at a late-‘70s folk club in Toronto called the Groaning Board. Between the Breaks… Live was a nine-song set which included five of Stan’s songs recorded for the first time, a live version of one song from Fogarty’s Cove, a traditional song and two drawn from other writers.

Although the stage patter was edited out, it’s a great live album that captures much of the excitement of a Stan Rogers concert in those days. His regular touring musicians at the time, brother Garnet Rogers on violin and flute and bassist David Alan Eadie, were augmented by Grit Laskin on long-necked mandolin, concertina and Northumbian small pipes, and guitarist Curly Boy Stubbs (producer Paul Mills). All of the musicians also sang (as did the audience) on several songs. Like the remastered version of  Turanaround, this great-sounding reissue sounds much better than the LP or the first CD release.

Among the standout tracks is the live version of “Barrett’s Privateers,” which I referred to as “a song that seems so real and authentic you’d swear it was a time-tested traditional sea chantey” in my review of Fogarty’s Cove. Tempered by hundreds of performances, this rendition is much more exciting and dynamic than the studio rendition from a couple of years earlier.

Other standouts include “The Flowers of Bermuda,” a cinematically vivid stomper about a sea captain who went down with his ship just a few hours away from his destination, “Rolling Down to Old Maui,” a traditional chantey that Stan loved to sing, and “Harris and the Mare,” a narrative ballad about a peaceful man driven to violence.

The absolute highlight, though, is “The Mary Ellen Carter,” a fictional account of some sailors from a sunken boat determined to raise and restore it. As I’ve written before, it is one of the most inspiring and most infectious songs in the contemporary folk canon. It remains, to this day, my favourite of all of Stan’s songs.

As I noted in my review of The Very Best of Stan Rogers, Stan was a friend and colleague. Although I know these albums backward and forward, it is so exciting to hear them again in the glory of these remasterings,