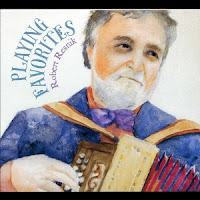 My pal Robert Resnik is – quite rightly – regarded as a cultural treasure in the state of Vermont. For the past 15-plus years he’s been best known as host of All the Traditions, Vermont Public Radio’s deservedly popular folk music program. But he’s also a wonderfully musical guy himself adept at many instruments that you strum and pluck, blow into, or squeeze and pull, and many styles of North American and European folk music.

While Robert has partnered on any number of delightful CDs as a member of such bands as the Highland Weavers, Swing & Tears and Twist of the Wrist, and in a duo with Marty Morrissey, Playing Favorites is the first solely under his own name. And, true to the name of the album, it’s a world tour of songs and tunes that are among his favorites to play. From one track to the next – and often on the same track thanks to overdubbing – we hear Robert move from guitar to clarinet to pennywhistle to hurdy gurdy, to melodeon to kortholt (a woodwind instrument popular in the Renaissance period) to concertina and, of course, voice.

Traditional songs and dance tunes dominate the set. Most of the traditional ballads originate in the British Isles. A highlight of these is “Mary Neal,” a story of star-crossed lovers whose escape across the sea to Quebec ends in tragedy. Robert’s performance, sung over the drone of the hurdy gurdy with evocative lines from his clarinet and whistle, is haunting. Another is “Bedlam Boys,” a strange song dating back 400 years, about the entertainment provided by residents of a London insane asylum (Robert mentions in the liner notes that the asylum would charge admission to the public “for the pleasure of observing the lunatics”).

Among my favorite instrumentals is “O’Carolan Medley,” three tunes composed about 300 years ago for the Irish harp by Turlough O’Carolan. Robert translates the music to the guitar exquisitely and gently picking out the tunes. The overdubbed whistle on the final tune is also quite lovely. Another is “Esperanza,” a medley of three accordion tunes – the kind of music you’d like to hear in a sidewalk café in Paris.

And lest you think that Robert is stuck in tradition, he also includes several contemporary songs, including a couple of my personal favorites from the Montreal folk scene of the 1970s. Robert’s version of Allan Fraser’s “Dance Hall Girls” puts a slightly different spin on the song by stating, “That’s the way it always is here in Baltimore,” emphatically in the chorus rather than asking, “Is that the way it always is here in Baltimore?” I particularly like the way Robert’s clarinet weaves in and around the vocal on “Dance Hall Girls.” And Robert’s version of the late Kate McGarrigle’s “Come a Long Way,” featuring lovely harmonies by Mary McGinniss and Kristina Stykos reminds me of hearing Kate sing the song at the Golem, the intimate Montreal folk club I was running back in the mid-1970s.

While Robert performs most of the vocals and instruments on Playing Favorites, several other songs benefit from the fine harmonies and instrumental work of Mary and Kristina. Kristina also recorded and mixed the sessions.