Rory Block – I Belong to the Band: A Tribute to Rev. Gary Davis 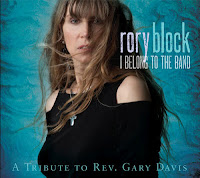 RORY BLOCK
I Belong to the Band: A Tribute to Rev. Gary Davis
Stony Plain
roryblock.com

Over the past six years, Rory Block – who, as I’ve said before has been one of the very finest of the traditional blues interpreters and revivalists for decades – has been turning her recording attention to a series of albums paying tribute to artists her inspired her journey deep into the well of the blues. After previous albums paying tribute to Robert Johnson, Son House and Mississippi Fred McDowell, she turns her attention Reverend Gary Davis, the legendary street preacher, masterful ragtime and blues guitarist, and singer and writer of classic African American gospel songs and spirituals.

Like the previous tributes, I Belong to the Band: A Tribute to Rev. Gary Davis, is an intense voyage into the music of a seminal artist. Rory forsakes the Rev’s few secular songs – like “Candy Man” or “Cocaine,” both of which make me think of my late friend, Dave Van Ronk – to concentrate exclusively on his some of the religious songs he wrote or definitively arranged. Rory’s arrangements remain true to the spirit of Davis’ work while, at the same time, adding much of her own personality. I particularly like the way she uses overdubs of her own voice to create vocal harmonies and even choral effects in her powerful vocal arrangements. She sings these songs of faith with might and conviction. Equally powerful are Rory’s interpretations of Davis’ extremely complicated guitar arrangements.

While all of these songs are compelling some of my favorites include “Samson & Delilah (a.k.a. “If I Had My Way),” “Twelve Gates to the City” “Let Us Get Together Right Down Here” and the always-haunting “Death Don’t Have No Mercy.” On these songs, and the other seven, Rory takes command and seems to inhabit the soul of the songs with power, grace and authenticity.