Blind but Now I See: The Biography of Music Legend Doc Watson by Kent Gustavson 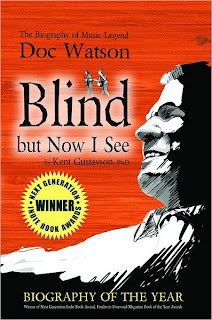 
Note: Blind but Now I See: The Biography of Music Legend Doc Watson was first published in 2010. This review is based on the revised and expanded version published in 2012.

The Back Door was small coffee house on the corner of McTavish and Sherbrooke Streets in downtown Montreal beside the McGill University campus. It’s two-year existence from 1969-1971 corresponded to my last two years of high school and the time that I began to seriously immerse myself in the folk music world. Among the artists I saw and met at the Back Door were Sonny Terry & Brownie McGhee, Jerry Jeff Walker, Paul Siebel, Ramblin’ Jack Elliott, Rosalie Sorrels and Doc & Merle Watson.

Doc and Merle – billed that week as “Doc Watson & Son,” Merle would have been 21 then – played an amazing concert. Their guitar playing and Doc’s warm singing were like nothing I’d heard before. I quickly acquired the Doc and Doc & Merle albums which had been released over the previous decade and nearly every other one that’s been released in the four decades since. Doc was among the most-played artists in the 14-year history of my Folk Roots/Folk Branches radio program.

Doc Watson was one of the greatest and most influential musicians of all time – particularly on guitar players. Although not primarily a bluegrass musician – Doc played virtually every kind of Southern roots music from traditional Appalachian music through blues, folk and rockabilly – Doc’s guitar playing redefined the role of the acoustic guitar in bluegrass music making it a lead, rather than just rhythm instrument. Today, it’s not unusual to hear guitar virtuosos picking the bejeezus out of fiddle tunes, but it all comes back to Doc’s masterful playing in the 1960s.

Doc was in his last days when Kent Gustavson put a copy of the revised version of his 2010 book, Blind but Now I See: The Biography of Music Legend Doc Watson, in the mail to me. It arrived a few days after Doc passed away, at age 89, on May 29.

The book is a compelling read. Although it would appear that Gustavson was not granted direct access to Doc and his immediate family, or even to Mitch Greenhill, his longtime agent (who took over from his father, Manny Greenhill) at Folklore Productions, his research was thorough and drew on many years of interviews of interviews with the legendary artist, articles, book references and many direct interviews with musicians and others who worked with Doc over the decades and knew him well.

Among the anecdotes I particularly enjoyed was the story of how Jerry Ricks, a young African American blues musician, took Doc in for a couple of weeks in 1963 when Doc was playing in Philadelphia. Jerry, who passed away in 2007, was a friend of mine. The way the story is told in the book is very similar to the way Jerry told it to me when I first met him in 1973.

Although I crossed paths with Doc several times in the 1970s and ‘80s, I didn’t really know him personally, so there was much I learned from this book. From the stories of his boyhood years at home and at the boarding school for the blind that he attended to the devastation he felt after Merle’s death in 1985 (and from which he never really recovered).

Although every Doc Watson concert I was ever there for, and every Doc Watson record I’ve ever played (and played and played and played), was the work of a master, Doc, apparently, did not enjoy the musician’s life of playing for strangers every night and being away from home. The early years playing concerts with traditional musicians like Clarence Ashley or traveling on his own to coffee houses and college concerts gave him ulcers.

And while I knew that Doc had spent most of the 1950s playing electric guitar in a local rockabilly band prior to his 1960 discovery by folklorist Ralph Rinzler (who played mandolin in the Greenbriar Boys), and while I knew that Rinzler had prevailed on Doc to just play traditional music on acoustic guitar (and banjo), I was unaware of how restricted Doc felt as a musician during the years he worked with Rinzler. By the time of my first Doc Watson concert a decade later, it was a given that Doc would move seamlessly from a traditional folksong, to a Mississippi John Hurt blues, to a Jimmie Rodgers country song or a contemporary folk-rooted song by Tom Paxton or Townes Van Zandt, and whatever else Doc might want to play – including an occasional rock ‘n’ roll classic. But, as the book reveals, that wasn’t the case in the early years when Rinzler would shape Doc’s recordings and concert sets.

Things began to ease up for Doc by the mid-1960s when teenaged Merle began to go out on the road with him. His son provided company and greatly eased the logistics of traveling for the blind musician.

But, as we learn from the book, the road was not kind to Merle either.

The Merle I remember from the stage was almost silent but for his guitar playing. Off stage, though, he relieved his own frustrations and loneliness through too much partying, substance abuse and promiscuity – losing his marriage in the process – culminating in the strange circumstances of the late-night tractor accident that claimed his life in 1985.

Gustavson tells the story of Merle’s struggles and his death candidly without either sensationalizing or suppressing what was undoubtedly that darkest chapter of Doc’s life.

As well as telling the story of Doc’s life, I particularly enjoyed the way Gustavson provided the context surrounding the story, from the descriptions of Appalachian mountain life when Doc was growing up to the realistic portraits of the music scene during the long decades of Doc’s career.

Gustavson tells Doc Watson’s story, from boyhood through to his later years, well. The writing is crisp and I appreciated the sidebar style contextualization he built into the narrative. Even when discussing the seeming aloofness that Doc retreated into after Merle’s death, Gustavson writes with an understanding of the circumstances and always with the complete respect due to one of the greatest of all musical giants.