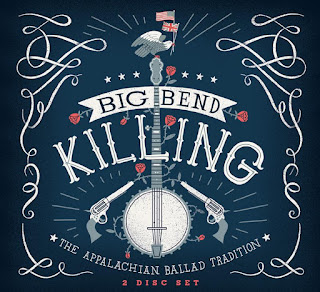 While much of the attention in modern folk music circles is centered on contemporary singer-songwriters, traditional folk music rooted in ancient balladry remains a vital force in the music. And while there is much to be said for the argument that that the oral folk tradition through which these traditions were passed from generation to generation began to disappear with the advent of recording and mass media in the 20th century, there are still musical families in areas like the Appalachian mountains in the U.S. who continue to maintain their traditions of passing down songs, and traditional revivalists who have learned the music through contact with both source singers and recordings who have maintained and expanded the traditions.

Each of the 32 performances – 31 of them previously unreleased and most recorded specifically for this project – on Big Bend Killing is performed with both reverence for tradition and compelling vitality.

The first CD includes 13 performances of songs that originated in the British Isles and that became staples of the traditional Appalachian repertoire. While most of the songs are performed by American artists, there are four tracks by artists from across the pond. Scottish ballad singer Archie Fisher turns in lovely versions of two long ballads, “Thomas the Rhymer” and “Tam Lin” in which the events described in the songs unfold vividly, while the British trio of Martin Simpson, Andy Cutting and Nancy Kerr offers equally gripping versions of “The Sheffield Apprentice” and “Willie Taylor.”

Other highlights on the first CD include versions of “Lord Thomas and Fair Ellender” by veteran Appalachian traditional singer Sheila Kay Adams and “Mathy Groves” by her younger cousin Donna Ray Norton; and two versions of “Barbara Allen” by Carol Elizabeth Jones and Rosanne Cash.

The 19 songs on the second CD include several distinctively Appalachian versions of British Isles ballads but centres mostly on ballads that were originally sung in the Appalachians – including “Tom Dula,” perhaps the best known Appalachian ballad thanks to its popularization as the Kingston Trio’s hit, “Tom Dooley.” The rendition here, sung sadly by Laura Boosinger with backing by the Krüger Brothers, draws the listener into the sad tale of the murder of Laura Foster.

Murder is a theme explored in many traditional ballads and other compelling performances of murder ballads on the second CD include “Pretty Polly,” sung by Amythyst Kiah with backing by Roy Andrade; “Omie Wise,” sung by Hasee Ciaccio with fiddler Kalia Yeagle; the familiar “Banks of the Ohio,” performed by Doyle Lawson; “Knoxville Girl,” sung by Kristi Hedtke and Corbin Hayslett; “Big Bend Killing,” a song I’d not heard before, performed by the great Alice Gerrard; and “Old Joe Dawson,” another one I’d not heard before, sung a cappella by Bobby McMillon.

Other highlights on the second CD include a great version of the well-known African American blues ballad, “John Henry,” by Amythyst Kiah with Roy Andrade; Elizabeth LaPrelle’s captivating version of “West Virginia Mine Disaster,” a contemporary ballad written by the late Jean Ritchie; and Rosanne Cash’s gorgeous, album-closing version of “The Parting Glass.”

And make no mistake, I could go on and on about the songs and singers that I haven’t mentioned.

The album was produced by Ted Olson, a professor of Appalachian studies and bluegrass, old-time, and country music studies at East Tennessee State University, who contributes essays on traditional Appalachian balladry and extensive notes on each of the songs to the album’s 74-page booklet.