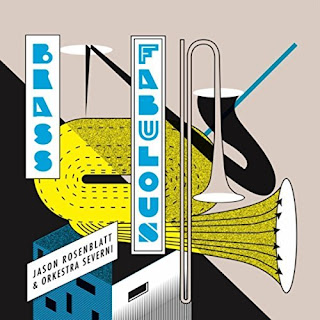 Jason Rosenblatt established his initial reputation by playing harmonica and leading Shtreiml, an inventive klezmer band based in Montreal. He has since branched out with other projects including Jump Babylon, a rock band featuring songs on Jewish themes, and a solo album steeped in jazz, blues and roots influences.

On Brass Fabulous, Jason is at the piano with Orkestra Severni, a group of horn players and a drummer – including his wife, trombonist Rachel Lemisch – playing a set of original compositions steeped in klezmer and other Eastern European traditions.

Among the highlights are “Sirba a la Oscar,” a three-part dance with sirba, hora and freylach sections; “A Mother’s Pain,” which has a sadder motif than most of the rest of the album; and the inventive “Chassidic Love Tango,” which adds a South American touch to the Eastern European base of most of the music.

The album is well-named because Jason's compositions are constructed to highlight the sounds of the horns – tuba, trombone, trumpet and saxophone – and they really do sound fabulous.