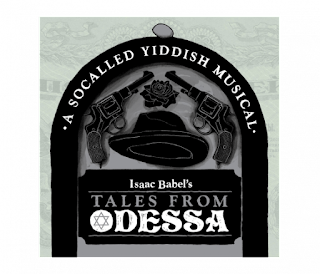 Josh “Socalled” Dolgin – who grew up in the Ottawa area and is now based in Montreal – has developed a well-deserved reputation as an innovative force in Jewish music. Among his projects is the musical comedy, “Isaac Babel’s Tales from Odessa,” staged to much acclaim in 2013 by the Dora Wasserman Yiddish Theatre at the Segal Centre in Montreal.

The musical is based on a collection of stories, “The Odessa Tales,” written by Isaac Babel – widely considered to be one of the greatest Russian Jewish writers – in the 1920s about Jewish gangsters in Odessa in the last years of czarist regime.

Like many of the Dora Wasserman Yiddish Theatre productions over the years, Isaac Babel’s Tales from Odessa was a larger-than-life production with a large cast of singers and actors – both professionals and skilled amateurs including Ottawa-area actor Gab Desmond Hegedus in one of the lead roles – and an eight-piece orchestra led by well-known American klezmer clarinetist Michael Winograd.

Four years after the production was staged, Josh has released this entertaining cast recording of the music and songs and lovers of klezmer music and Yiddish theatre songs – as I am – will appreciate these rollicking songs, even if they don’t understand the actual words. While the spirit of the production comes through in the fine performances, I do wish the package included a booklet with synopses of the show and the songs. But even without those explanations, “Isaac Babel’s Tales from Odessa” is fun and delightful to listen to.