Orit Shimoni – Songs for My Father 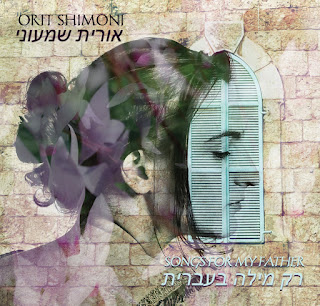 I first discovered the music of Israeli-Canadian singer and songwriter Orit Shimoni in 2006 when she released her first CD under the name “Little Birdie.” It struck me then that her best songs had a quality reminiscent of Leonard Cohen – a comparison that has deepened for me over the years as I’ve followed her evolution as a singer, songwriter and performer. While she released her first albums as Little Birdie, her most recent releases have been under her real name.

While Orit’s previous albums have primarily been original songs in English, she decided to record an album of the Israeli folksongs she grew up with as a gift for her father on his 70th birthday. Songs for My Father is a lovely, quiet, often thought-provoking collection highlighted by such songs as “Chofim,” a song of longing for a place that is missed that Orit says reminds her of her childhood home in Jerusalem, and “Shir Leil Stav,” a rumination on autumn and falling in love.

The album’s most powerful moments come in “Ein Li Eretz Acheret,” a song that expresses a love and loyalty for Israel rooted in a desire for the country to fulfil its true dreams, and “Choref 73,” in which the generation that came of age in the 1990s – Orit’s generation – questions the lost promises of peace pledged by their parents’ generation.

Orit ends the album with an original song, “HaYavin,” in which she sings that her love for her father is rooted in the gift of music that he gave her and is manifested in her very act of singing.