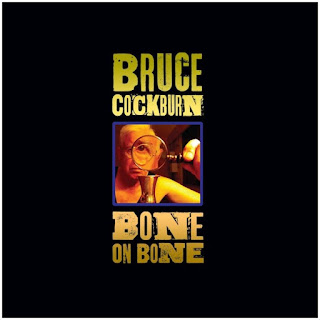 I’ve known Bruce Cockburn for a long time. I first met him and heard him perform, circa 1970 or ’71, at the short-lived Back Door Coffee House in Montreal around the time his first LP was released. Over the decades, I’ve seen Bruce many times in venues large and small, I’ve listened to every album he’s ever made, and I’ve interviewed him for newspaper and magazine articles and on the radio.

Bone On Bone, Bruce’s new album (which will be released September 15), his first in more than six years, is a compelling set of personal, often spiritual, songs that touches folk, rock, blues, jazz and gospel bases.

The album begins with the unmistakable sound of Bruce’s acoustic guitar on the intro to “States I’m In.” Within seconds the other musicians kick in and Bruce launches into poetic, intense verses that seem like metaphors for contemporary America. “Oo-ee all the sights I’ve seen in the depth of the world and the heart of a dream/Oo-ee all the places I’ve been each one reflected in the states I’m in,” he sings in the chorus. Like most of the songs on the album, it was written in San Francisco, where Bruce has been living for the past several years.

As mentioned, several of these songs reflect Bruce’s deeply rooted spirituality. “Stab at Matter,” which seems like it could be interpreted as an end-times song, has an infectious gospel feel to it with the San Francisco Lighthouse Chorus responding to Bruce’s calls. The Chorus sings on about half of the songs on Bone On Bone.

Other spiritually-based songs include the lovely “Forty Years in the Wilderness” and “Looking and Waiting,” which I interpret as a search for signs of God. The most obvious signs of Bruce’s religiosity come near the end of the album in the declarative “Jesus Train” and in a version of the traditional “Twelve Gates to the City” with additional verses by Bruce that leave little doubt that his religious vision is broad and inclusive. (Bruce and I had an interesting discussion on the evolution of his religious thinking for “Bruce Cockburn: On Spirituality, Activism and Music,” the cover story of the Summer 2002 edition of Sing Out! magazine.)

Other highlights on Bone On Bone include “3 Al Purdys,” in which Bruce sets words by the late Canadian poet Al Purdy to music; “Café Society,” an observational blues about the comings and goings at local coffee shops everywhere; and “Bone On Bone,” yet another of Bruce’s gripping acoustic guitar explorations.

The album was produced by Colin Linden, who has, by now, worked on many of Bruce’s recordings and has a deep understanding of Bruce’s music, and features such fine musicians as Colin on guitar, bassist John Dymond, drummer Gary Craig, Ron Miles on cornet, and John Aaron Cockburn on accordion.

Bruce will be supporting Bone On Bone with an extensive tour that brings him to the National Arts Centre here in Ottawa on September 22. Visit Bruce’s website for a complete list of concertdates.