Beyond the Pale – Ruckus 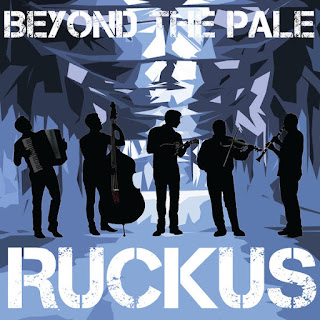 (A version of this review was published in the September 18, 2017 issue of the Ottawa Jewish Bulletin.)

Ruckus – an exciting, all-instrumental set of 13 tunes – is the first CD in eight years from Beyond the Pale, the Toronto-based klezmer band led by mandolinist Eric Stein, artistic director of Ashkenaz, Toronto’s biennial festival of Yiddish and Jewish culture.

Almost equally divided between traditional klezmer and Balkan tunes and original compositions by the various members of the band, Beyond the Pale uses traditional styles as a starting point in their compositions and adaptations as they incorporate influences from classical music, jazz and bluegrass into their playing.

For example, the moods in Eric’s “The Whole Thing” shift from a classical feel to a Parisian café mode, while Aleksander’s haunting “Andale” seems like it is rooted in slow Middle Eastern forms.

Among the other highlights are “Mila’s Dance,” a playful tune composed by Martin and “Oltenilor,” a toe-tapping traditional klezmer tune that I don’t think I’d heard before. Actually, in the hands of Beyond the Pale’s virtuoso musicians, every tune is a highlight.

Posted by Mike Regenstreif at 6:54 AM