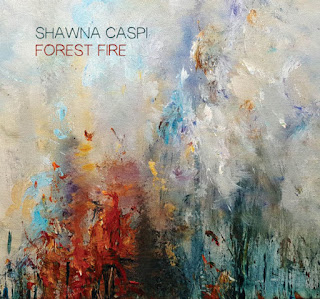 (A version of this review was published in the September 18, 2017 issue of the Ottawa Jewish Bulletin.)

That Shawna Caspi has become an accomplished guitarist, singer and insightful songwriter is well documented on Forest Fire, her fourth CD, a collection of seven original songs and two covers performed quietly, yet with confidence and strength, in contemporary folk-rooted settings.

The album opens with “Love in a Moving Van,” in which she uses the inherent difficulties in a couple’s do-it-yourself move with a U-Haul truck as metaphors for the difficulties in maintaining a relationship over time.

Among the other highlights are “Devil’s Rolling Pin,” which uses a driving, minor-key setting to celebrate the discovery of exciting new music at the end of an otherwise difficult day; the heartrending “Never Enough,” an observational song about a mother’s efforts to change the ways of a wayward son; and “Brave Parade,” a song of courage “in an angry age,” written by Lynn Miles.

Shawna is also a visual artist and did the impressionistic painting of the forest fire on the CD cover.