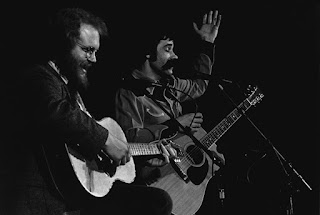 Between 1977 and 1982, I operated a small independent agency booking concert tours for a select clientele of highly regarded artists. One day, circa 1979 or ’80, my friend Bruce Kaplan (who, sadly, died in 1992), the head honcho at Flying Fish Records in Chicago, called and asked me to work with the Minneapolis-based duo of Dakota Dave Hull & Sean Blackburn. Flying Fish had just released (or was soon to release) River of Swing, Dave and Sean’s third LP.

Bruce sent me the LP, I loved it, and I ended up doing some booking for Dave and Sean. Dave – a very good singer and great guitar player – and Sean (who also, sadly, died in 2005) – a very good guitar player and great singer – complemented each other almost perfectly in their adoption and adaptation of western swing, country, and folk classics and originals. As a duo on stage – and with expanded accompaniment in the studio – they made wonderful music together over a 10-year period, and recorded three great albums.

Long out of print, Dakota Dave Hull has just reissued the three LPs on CD for the first time and it’s been such a treat to hear and enjoy these albums again. 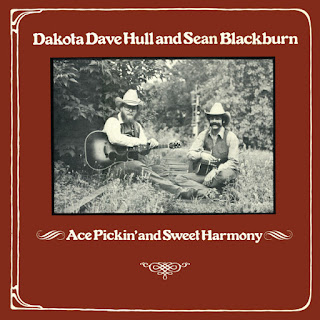 The title of the first LP, Ace Pickin’ and Sweet Harmony, recorded in 1977, actually sums up what Dave and Sean’s music was all about. Recorded with a half-dozen of Minneapolis’ finest musicians and – including such enduring notables as Peter Ostroushko on fiddle and mandolin and Butch Thompson on clarinet – the album includes some great western swing classics like “Hillbilly Swing” and “Old Fashioned Love” but I’m particularly fond of the original material.

Dave enjoyed a long songwriting collaboration with Jerry Clark and their three fine co-writes on the album are highly influenced by Woody Guthrie. These include “Drought Year,” a lament for the Midwestern drought of 1976, “The Old Campaigns,” a remembrance of political struggles from the 1930s, and, best of all, “Give the Fiddler a Dram,” sung from the perspective of a fiddler who’s seen too much and has drunk too much and who knows that times will be tough through the long winter approaching. “Give the Fiddler a Dram” is done in a medley with “Midnight on the Water,” one of my favorite fiddle tunes that features some great guitar playing from both Dave and Sean and, of course, fiddling by Peter.

Sean’s songs include the swinging “Jingle in My Jeans” and “When You Go,” a break-up song that seems wiser than most. 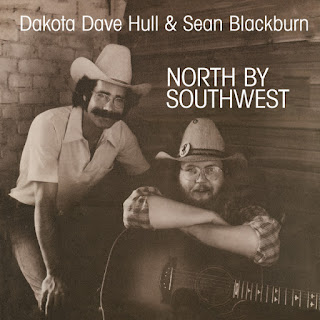 The second LP, North by Southwest, recorded in 1978, featured a smaller group of all-acoustic back-up musicians: Tim O’Brien on bass, Peter Ostroushko on mandolin and fiddle and Butch Thompson on clarinet and piano. While the first album had a jam session feel on many of the songs, this one seems tighter and more rehearsed. Some of my favorites of the classic material include “Dixie Cannonball,” on which Dave and Sean trade lead vocals on the verses and harmonize on the chorus, “Take Me to the Land of Jazz,” which is a lot of fun, and “Miss the Mississippi and You,” which convinced me that Sean – had he wanted to – could have been one of the greatest singers in country music.

The original material included a couple more fine songs from Dave and Jerry Clark and a tongue-in-cheek tribute to the art of growing a moustache by Sean. 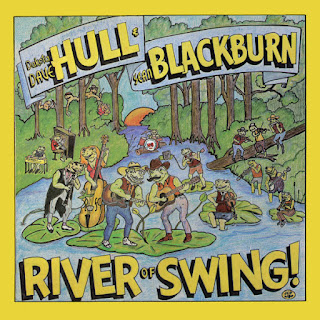 Dave and Sean’s third and final LP, River of Swing, recorded in 1979, combined the bigger band fun of the first album with the tightness of the second. An expanded group of virtuoso musicians carries up-tempo swing tunes like “Deep Water” and “Mississippi Shore” to new heights while numbers like “I Don’t Want to Set the World on Fire” showcase Sean’s voice to great effect.

The original numbers include Dave and Jerry Clark’s “Money,” while Eric Peltoniemi has two fine collaborations. “The Wicked Wind of Fargo,” co-written with Dave decades before the Coen Brothers movie, is a toe-tapper that doesn’t make me want to ever visit Dave’s hometown within months of winter, while “River of Swing,” co-written with Sean, is an infectious tribute to the joy of music that explodes into a Dixieland jam worthy of Preservation Hall.

There was a lot of magic in the musical chemistry of Dakota Dave Hull and Sean Blackburn. I’m so happy their three albums are back in print.

After the duo wound down, Dave gave up singing and devoted himself to the guitar. He is now widely recognized as one of the greatest instrumentalists and composers in acoustic folk-rooted and folk-branched music. Dave has a bunch of excellent CDs to his credit. Sean went on to form a superb duo with cowgirl singer Liz Masterson with whom he recorded several fine albums before suffering a heart attack and passing away tragically at the much-too-young age of 56 in 2005.