Tom Paxton – Boat in the Water 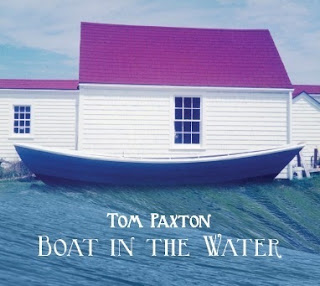 I’ve written about Tom Paxton a lot over many years: here on the Folk Roots/Folk Branches blog, in Sing Out magazine, and in the Montreal Gazette. I’ve worked with him a bunch of times in coffee houses and concert halls and folk festivals – and, more than once, I’ve told the story of how an encounter with Tom when I was about 14 or 15 (and he was 31 or 32) was that “it moment” for me that led to a lifetime’s involvement in folk music. All this to say, without trying to be too repetitious, that I regard Tom to be one of the most important and significant songwriters and folksingers of all time. Period.

At age 79, Tom remains a vital artist. On Boat in the Water, his new album, Tom offers eight new songs and new versions of five of his classics from the 1960s and ‘70s all delivered from the perspective of wisdom and experience – whether they are songs reflecting his own life or reflecting the lives of characters created from his (and his co-writers’) creative imagination(s).

Among the most poignant of the new songs are “The First Thing I Think of Each Morning,” co-written with Jon Vezner, and “It’s Too Soon,” co-written with Pat Alger, both of which made me think of Midge Paxton, Tom’s late wife, who passed away in 2014. I always enjoyed so enjoyed Midge’s company when she came up to Montreal with Tom or at folk festivals we were all at.

Other highlights from the new songs include “Boat in the Water,” co-written with Pat Alger, a breezy let’s-get-away-from-it-all-together tune; “A Daughter in Denver,” in which Tom’s character, a divorced dad with grown kids, laments how his family has scattered; and “Eleanor’s Song,” co-written with Jon Vezner and Don Henry, a portrait of a woman who has lived life strictly on her own terms.

Highlights from among the older songs that Tom revisits are “Outward Bound,” a beautiful farewell song that takes on even more poignancy in hearing it sung in Tom’s older voice; and “The Last Hobo,” a story of a man left behind by society that is filled with the subtext of ever-changing times.

Tom on vocals and guitar is well supported throughout the album by bassist Ralph Gordon and co-producers/multi-instrumentalists/harmony singers Cathy Fink and Marcy Marxer. Cathy also takes the lead vocal – and does a very nice job – on “Home to Me,” a tender love song that Tom used to sing at the Golem, the Montreal folk club I ran in the 1970s and ‘80s.

To paraphrase the title from a 1973 Tom Paxton LP, it’s always great to have new songs (and new versions of old songs) from an old friend. 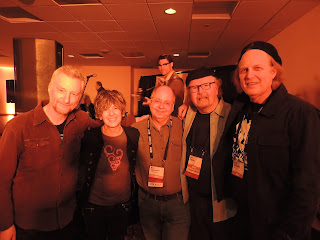 Pictured (from left): Billy Bragg, Sonia disappear fear, Mike Regenstreif, Tom Paxton and Greg Greenway (with Zachary Stevenson looking on as he does a sound check) at the Kansas City Folk Festival after the Folk Alliance International Conference (2017).